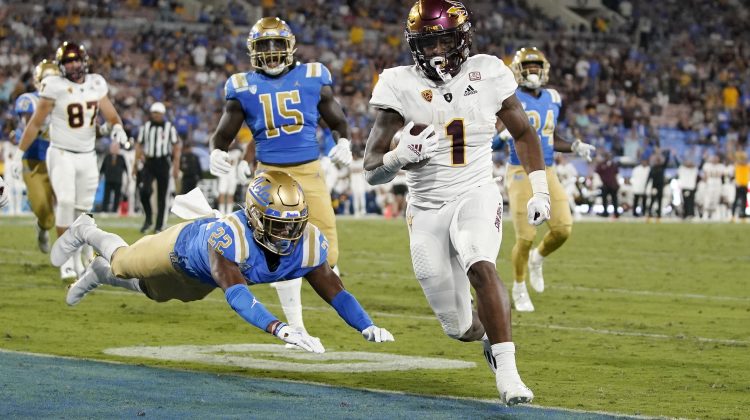 It feels early for a make-or-break game, but that’s exactly the situation unfolding in the Pac-12’s South division this week as Arizona State visits Utah.

If ASU wins, the race is all but over. The Sun Devils would have a significant lead with a manageable schedule and tiebreaker advantages on their closest pursuers, whose schedules aren’t nearly so manageable.

— With a victory Saturday, the Sun Devils would hold a one-game lead in the loss column and the head-to-head tiebreaker advantage over the only teams with one loss.

And that two-game lead would work hand-in-hand with a stretch-run schedule that provides ASU with plenty of chances to tighten its grip on the division.

For insight, the Hotline turned to an expert: Kenny White, an analyst for SportsLine and legend in the sports gambling industry.

White is the former head of the Las Vegas Sports Consultants, the highly influential group that sets the opening lines used by the casinos. He also publishes power ratings and a data-packed college football magazine.

We asked White to set the odds for each of ASU’s remaining games.

In return, he provided not only odds but also win probabilities and projected final scores, all based on his analytics:

Utah found a quarterback and discovered its identity last weekend in a blowout victory at USC. Washington’s defense is among the best in the conference. So is Oregon State’s running game.

And the trips to the Pacific Northwest come on back-to-back Saturdays in November, when the weather could be inhospitable to desert dwellers.

But notice the point spreads: The Sun Devils are slight favorites in Corvallis and narrow underdogs in Salt Lake City and Seattle.

All three are basically toss-ups.

Also, ASU doesn’t need to run the table, as long as it beats Utah this week.

Win Saturday, and the Sun Devils would need victories in four of their last five games. They would be heavy favorites in three, a narrow favorite in one and a slight underdog in on

Let’s say they lose at Washington. Then it’s a matter of winning four games in which they’re favored.

And don’t forget: Our little exercise presumes either Utah or UCLA wins out.

The Bruins must play Washington, Utah and USC on the road and Oregon at home.

The Utes must play Oregon and UCLA at home and Stanford and Oregon State on the road.

The likelihood of either UCLA or Utah finishing with a single conference loss — the loss to ASU — is fairly remote.

Which means the Sun Devils could lose twice and still be in solid shape if they beat Utah, because they would own the tiebreaker over the Utes or Bruins in a two-loss scenario.

Two things, equally true: It’s early, and this is a make-or-break game. If the Sun Devils win Saturday night, the South race is just about over.

Jon Wilner has been covering college sports for decades and is an AP top-25 football and basketball voter as well as a Heisman Trophy voter. He was named Beat Writer of the Year in 2013 by the Football Writers Association of America for his coverage of the Pac-12, won first place for feature writing in 2016 in the Associated Press Sports Editors writing contest and is a five-time APSE honoree.