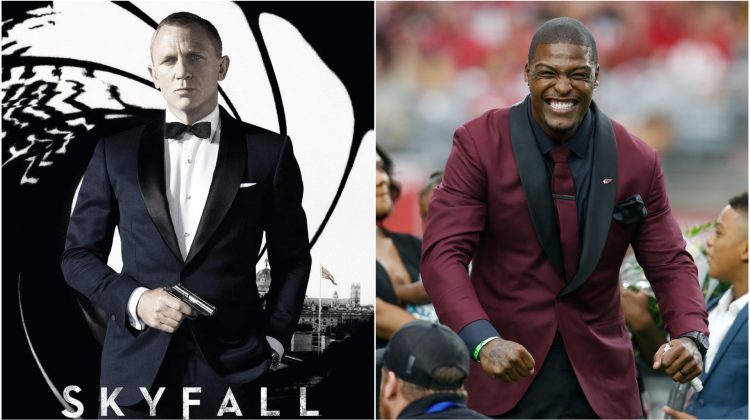 The Daniel Craig Bond Era is officially over.

This edition of 007 is holstering up his martini glass and hanging up the keys to his Aston Martin after five films. While this interation of Bond showed more emotion, more grit and focused on the man behind the number from Casino Royale to No Time to Die, each film had its own flavor.

That got me thinking, which Arizona athlete fits the mold of each Craig movie? I pondered this over a shaken – not stirred – Diet Coke, waited a bit for spoiler season to die down a bit and focused on the mission at hand:

Craig’s first Bond film showed us a different side of 007. He was raw. He hadn’t transformed into the unflappable, borderline robotic secret agent his predecessors had displayed. Much like Ayton, who built upon his defensive prowess and more consistent focus in last year’s playoff run, we got to see Bond discover his hallmark accessories that made him, well, him.

He made mistakes, but he was effective. He learned on the job and completed his mission, but ultimately did not get the long-term life he wanted (at least yet). Suns fans are hopeful Ayton’s max contract doesn’t turn into his Vesper Lynd.

"One thing about me, throughout my whole life, I've always learned to control what I can control. At the same time, obviously I'm disappointed, but I'm still trying to get us back to the finals." #Suns big Deandre Ayton addressing contract talks as they ended w/o an extension. pic.twitter.com/nJPmkUMqCi

The sophmore film of the Craig era is fast. From the opening car chase, Quantum kicks off at a break-neck pace where Bond is seemingly cornered multiple times by his pursuers, only to narrowly wiggle his way out to buy more time. Sound like a certain quarterback we all know?

It doesn’t matter if it’s in a car, along a rooftop or on a boat, speed is the main theme of this iteration of Bond and the Cardinals.

007 also has a few “How did he do that?” moments like flying a plane into a sinkhole. That question gets asked of Murray about once a quarter.

Much like the Cardinals offense under Murray, the end of Quantum of Solace is explosive. Seriously, who thought a gasoline-powered hotel and gunfire would be a good idea?

The best Craig Bond movie in my humble (and correct) opinion mixes power and polish. Craig’s character barrels through a train in the opening scene, rips off the tail of a car only to check his cufflinks after jumping aboard.

This week our focus has been SKYFALL. This train chase took two months to shoot. Discover more at https://t.co/zXshHCgALW pic.twitter.com/XUtgBnmgFf

When A-Dub’s playing career was all said and done, he was only one of six players in NFL history to tally at least 25 sacks (power) and 25 interceptions (polish) in his career.

Much like how Wilson’s career looks better the further we are removed from it, Skyfall holds up even more as one of the best Bond films ever.

On this day in 2001, we selected Adrian Wilson with the 64th pick in the #NFLDraft. pic.twitter.com/0IgRve3q25

Critics of Max Scherzer early in his career say he was reckless. His violent pitching motion would never hold up over the years.

You want reckless? In Spectre, James Bond has a helicopter fight above a massive crowd with no regard for the public or their parade.

The rest of Spectre is all about Bond having to face his past. The villian of the film, Bloefeld played by Christoph Waltz, gives constant reminders of allies and love interests who died at Bonds’ hands. He tells Bond he is “the author of all your pain.”

Sounds like Diamondback fans when they see Scherzer, the eight-time All-Star and three-time Cy Young winner who has had a plenty healthy career, take the mound and pitch in significant games for teams that aren’t in Arizona.

Max Scherzer is one of the greatest pitchers of his generation. 2013 Cy Young winner with the #Tigers, 2016 & 2017 with the #Nats, 8x All-Star & most importantly, a 2019 @Nationals World Champion. Good luck tonight, @Max_Scherzer! Go #Dodgers pic.twitter.com/0U2TxfTbrK

That pain is also a frequent reckoning now that Scherzer resides in the National League West.

No Time to Die – Larry Fitzgerald

The final Craig-Bond film is a bit of a greatest hits catalouge. What do you think when you think of James Bond?

A twist or two or three.

Even as each Bond has put his fingerprints on the role, you’ll still have just about every movie hit those marks. No Time to Die leans into them hard, for better or for worse.

It’s a consistency that is seldom matched.

But 18 years putting on one uniform and delivering at a high level, no matter the odds (or quarterback) is the same level of dependability Fitz brought to the field that Bond brought to the screen.

Plus, Fitz’s door on playing is all but closed, but not completely shut without a retirement announcement. Without getting into spoilers, the post-credit slate states “James Bond will return.”

We’ll have to wait to see what’s next for Fitz – and Bond – in their next chapters.

Have your own pairings for these films? Make sure to tag @Sports360AZ on Twitter to let us know.