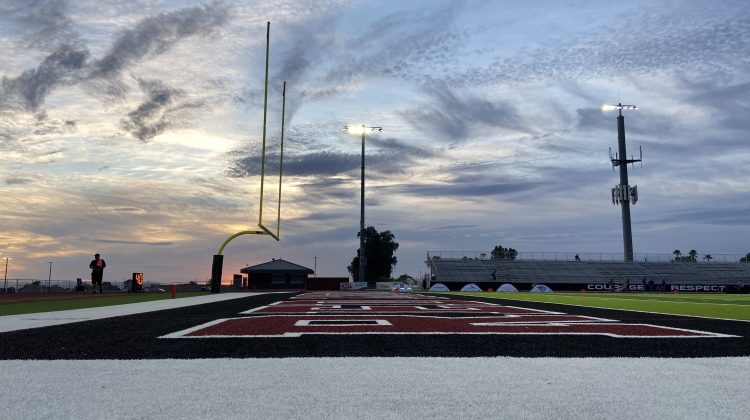 It’s October 8 (or I guess October 9) and the high school football season is in full swing. Or half swing since it’s basically the midway point.

Really the whole state is booming across the sports landscape, with ASU football ranked in the top 25, the Mercury being the second team to make the finals this year, and the Cardinals aren’t losing games.

Things are crazy across state 48. So let’s make sense of some of that craziness on the Friday night gridiron.

The two top teams in the Open division this year are and will be Chandler and Hamilton. Just like last year. The Wolves are riding a 42 game winning streak, which hasn’t come to an end during a “retooling” year. The Huskies closest game this year against an in-state opponent was 23-13 against Casteel. The Huskies are hungry, it remains to be seen if they can take down the Wolves.

Either way, these two programs are on track to see each other in the semi finals or championship round.

Don’t Sleep On The Youngsters

Everyone is hyped about the Basha Bears. EVERYONE. Yet, most will write them off as an open division team that’s destined to lose. I’m not so sure that’s the case. Demond Williams Jr. is making strides on a weekly basis as the signal caller of the team. His support cast might be deeper than any other in the state, and they all play defense as well.

Chris McDonald is brewing something, and it might be unleashed fully come postseason play. This program is loaded with every skillet a coach could ask for and a play style that fits that talent seamlessly.

Not even Ty Thompson could get Mesquite into the open division. Cactus is destined to make it to the open this year. A 42-14 win over 5A Desert Edge, an open division team last year, all but solidified that spot for them as long as they win out.

Coach Joe Ortiz is coaching at possibly the highest level in the state. Prior to only scoring 42 tonight, the Cobras surpassed 50 points in every game. The defense plays its part as well, allowing less than 20 points per game.

How big of a game was this for @CHSCobraFB? After the players were clear of the field, administration allowed the student section to "rush" the field.

Okay so there’s four teams destined for the open division. But that might not be the most interesting debate this year come playoff team.

The 3A division is loaded with plenty of really good teams. Not a single one has separated itself as the favorite either.

Valley Christian is 7-0 following a 70-0 victory over Coronado on Friday night. This program is outscoring opponents 312-119. They appear hungry for a ring.

Snowflake was in the title game last year and are still 6-1 this season.

The race to the finish line will be fascinating to watch this season because there’s no correct guess at this point.

The 6A divsion may also be wide open. One team to watch out for is Red Mountain. They took down Mountain View 20-3 tonight. It could’ve gotten out of hand, had the Toros not forced multiple red zone interceptions on bad decisions by Carter Crispin.

Other than those picks, Crispin was actually crisp all night long. He spread the ball around to Lennox Lawson, Preston Heap, and four-star hideout Jakobi Lane. The lanky 2023 pass catcher added two touchdowns to his resume tonight. And he lives up to the Twitter username.

“You can’t guard me” @cantGuardJak1 living up to the Twitter handle w/ his 2nd TD of the night @RedMtnFootball leads 20-3 w/ 2:34 left #FridayNight360AZ @Sports360AZ pic.twitter.com/xXWWPg1isv

The Lions’ defense is also stellar. The only team to score more than seven against them was Liberty last week, who won 35-23.

There’s a few more tests coming up for this squad as they still have Desert Ridge, Queen Creek, and Williams Field on the schedule. They can compete with and beat any of those programs on a given Friday night.

This is fun. I’ll be completely honest. The best student section I’ve seen so far was Horizon high school back in week 1. Basha is a close second.

The best band I’ve seen is Saguaro’s. The key to my heart is Star Wars, and they played The Mandalorian theme song. Mountain View had a really great band on the road tonight at Red Mountain as well.