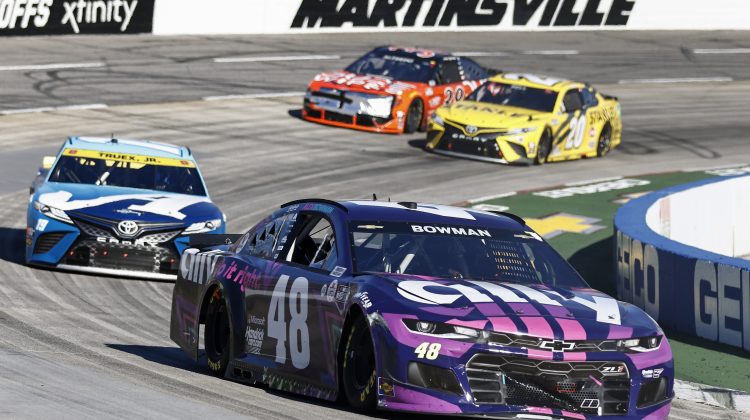 A grandfather clock from one of the most historic venues in NASCAR will reside in the home of an Arizona native.

Alex Bowman, who was eliminated from NASCAR playoff contention in the Round of 12, brawled on track in a fierce battle with playoff contender, Denny Hamlin, bumping and passing until Bowman made contact with the No. 11 machine, spinning Hamlin with seven laps to go at Martinsville Speedway. Bowman would hold off two more playoff hopefuls, Brad Keselowski and Kyle Busch, in an overtime finish to claim his fourth victory of the season.

“We get a friggin’ grandfather clock, that’s pretty special. I’ve struggled here for a long time,” Bowman said in victory lane on NBC. “The 48 car has won here a bunch, cool to do it again.”

The win caps off a great week for Bowman who also won as a dirt car owner with his driver, C.J. Leary, sweeping the Walkapedia Carolina Midget Showdown at Millbridge Speedway in North Carolina earlier this week.

Hamlin made his frustrations heard shortly after the checkered flag by running into Bowman’s idle car on the front straightaway and proclaiming Bowman to be ‘number one’ on both hands.

“I hate doing it, obviously I don’t want to crash anybody,” Bowman said. “I just got in, got loose underneath him, and spun him out.”

While Bowman will not be in the NASCAR Championship at Phoenix Raceway, he will have two of his Hendrick Motorsports teammates vying for the title in Phoenix, defending champion, Chase Elliott, and the 2021 wins leader, Kyle Larson.

Alex Bowman gets into him and a restart is coming! #NASCARPlayoffs x @peacockTV x @NBC pic.twitter.com/6EM9BLE8p2

This is Bowman’s fourth victory of the season after moving to the Hendrick Motorsports No. 48, formerly driven by seven-time NASCAR champion, Jimmie Johnson, with victories at Richmond, Dover, and Pocono as well. Bowman was formerly racing the No. 88 for Team Hendrick directly following the retirement of Dale Earnhardt Jr.

Wow! How about that for a win at Martinsville… Finally got ourselves a clock! 🤯 pic.twitter.com/jnQWPfGL7M

Bowman grew up in Tucson racing locally in dirt midgets, becoming a USAC National Focus Midget Champion in 2008 and the USAC National Midget Rookie of the Year in 2009. After a life-threatening crash in Las Vegas in 2010, Bowman stepped away from dirt racing and moved to North Carolina to pursue a career in stock car racing.

Bowman is no longer in the NASCAR Playoffs, an elimination bracket-style postseason that takes place in the final ten races of the season, so he will not be in the NASCAR Championship at his home track of Phoenix Raceway. The victory does give the 28-year-old momentum into the Championship race, though, at a track where he near won at filling in for Dale Earnhardt Jr. in 2016.