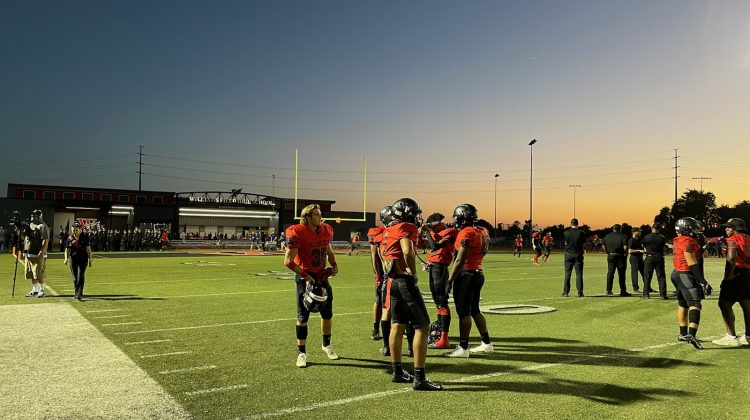 After five weeks of running up and down sidelines at high school football games across the Valley, I’ve compiled a list of five teams that have made an impression on me. Some programs have lived up to all my pre-conceived expectations while others have surprised me.

I finally made my way to the East Valley to check out a few teams I hadn’t seen from the sidelines just yet. My first stop on my Oct. 1 Friday Night Lights itinerary was at the home of the Williams Field Blackhawks.

Williams Field played host to the Queen Creek Bulldogs, both teams went into the matchup undefeated.

What began as an underwhelming performance by both teams eventually turned into a nail-biting 21-20 win for the Bulldogs. The first two plays of the game came with timeouts, setting the tone for a slow-paced first half.

Quarterback CJ Tiller connected with junior wide receiver Kyle Kasper for the first score of the game. Despite a slow-flowing first quarter, it was clear that this duo knows how to play ball together.

Even though Queen Creek came out on top, it was the Blackhawks that made an impression on me in the first half. Next week Williams Field is visiting the Centennial Coyotes, a team that has struggled so far this season. The biggest test Williams Field will face in the coming weeks is on Oct. 15 against Casteel. See #5 for more on Casteel.

I saw Mountain Pointe take down Corona del Sol in Week One of the season and I was stunned! I was on the sidelines expecting a competitive matchup that would result in an Aztec win. However, despite only winning one game last season, Mountain Pointe is now a force to be reckoned with.

Pride head coach Eric Lauer has transformed the mindset of this team and they look brand new. Following the Week One win, Lauer said their theme was “embrace the chase.” Lauer added that the team struggled with their identity last season.

After a 1-7 season last year, @MPHS_Football is looking like a new team after defeating @cdsfootball1 34-33 in the season opener.

Mountain Pointe is 3-2 on the season with losses to Perry and Casteel. While I don’t expect Mountain Pointe will be an open division team, they are opening a new chapter for the Pride this season.

At this point, I’ve gathered that Chandler is definitely worth the hype but I’ve also concluded that this may just be the year Hamilton takes down the Wolves. I’ll get to that next.

I checked out the Chandler Wolves when they hosted Colorado’s Cherry Creek in Week Two. The Bruins were in a position to truly test Chandler and the Wolves passed that test with flying colors. If Chandler’s 41-game win streak isn’t enough to convince you that they’re unrivaled, the depth of their roster should do the trick.

We’ve all heard coaches say defense wins games but their takedown of Cherry Creek solidified that saying. The Bruins took an early 7-0 lead but the Wolves’ defense held them to just that touchdown. The Wolves’ defense dominated the Bruins, forcing five turnovers in that contest.

I expected to see starting QB Blaine Hipa, instead, I saw Ethan Moore. Moore transferred in from San Diego and proved that Chandler could win with just about anyone they throw onto the field. In fact, Chandler has three talented quarterbacks that can probably lead their team to victory any given night.

While Moore was one of the stars of the game, Quaron Adams was his equally talented co-star. Adam’s was hard to miss, he showed off some incredible speed and elusiveness.

In conclusion, Chandler seems like the no-brainer first seed in the open division.

I’ll keep this short and sweet because I haven’t actually seen the Hamilton Huskies play yet. However, here’s what I know. Hamilton hasn’t defeated Chandler since 2013 but they’ve given the Wolves a run for their money.

After defeating Las Vegas powerhouse Bishop Gorman they’ve made their mark on this year’s record book. The final minutes of that game are likely some of the most exciting final minutes of any high school football game to take place in state 48.

For more on the Hamilton vs. Bishop Gorman game and thoughts on the Huskies’ potential, check out this episode of AZ Audibles.

I haven’t checked out Casteel just yet, that’s also on my to-do list. Brad Cesmat caught the Colts game on Friday against Higley. Casteel is now 3-1 with a loss against Hamilton in the second week of play.

I saw something pretty cool tonight. @CasteelFootball running back AJ Murphy had 5 house calls and rushed for a school record 377 yards #FridayNight360AZ pic.twitter.com/nnfzGBKqGa

Casteel and Queen Creek have a showdown next week.