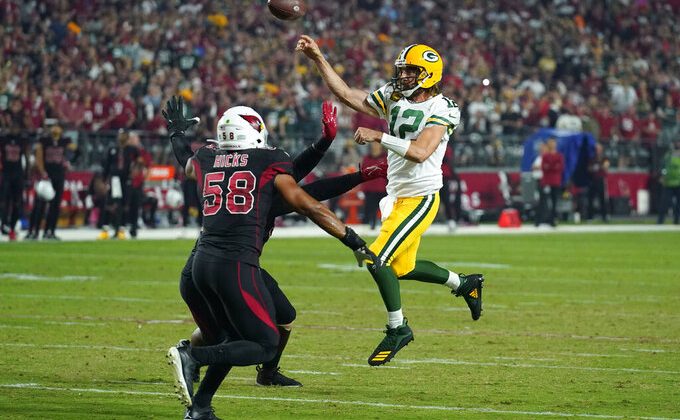 The opportunity was there for the Arizona Cardinals.

The defense came away with a clutch fourth down stop thanks to linebacker Devon Kennard’s ability to tip a pass from Green Bay quarterback Aaron Rodgers. It gave Kyler Murray and the offense a final chance to drive 95 yards down the field with just under three minutes remaining to either tie the game with the leg of Matt Prater or somehow find the end zone for the go-ahead score.

With just 15 seconds and one timeout remaining, the Cardinals aimed to take one final shot at the end zone on a back-shoulder fade route to A.J. Green. Head coach Kliff Kingsbury said the team wanted to exploit the one-on-one matchup and that it was a “routine play.” But nothing about it was routine.

Murray let the ball go and Green didn’t turn around. Instead, it fell into the hands of defensive back Rasul Douglas, who spent all of September as a Cardinal, to secure the 24-21 win for the visiting Packers on Thursday night.

“Miscommunication, obviously,” Kingsbury said. “We’ve got to communicate better in those situations. We feel like it’s a safe throw if he knew the route to run, no question. It was the right place to go with the ball, just didn’t communicate.”

Miscues, albeit none as big as the one on the final play, plagued the Cardinals throughout the game. Rookie wideout Rondale Moore, who doubles as the return man for the Cardinals, had trouble finding his way against the Packers.

In the second quarter he muffed a Packer punt, sending the ball just barely off his fingertips. It was recovered by Green Bay at the Arizona 3-yard line, but the Packers managed to only come away with three points. On the ensuing kick, he fielded it from 5 yards deep in the end zone and managed to only get to the 15. It led to a Cardinal punt.

Murray tried to find Moore on a crossing route on two occasions. Once, the rookie hideout appeared to stop short on the route. The second instance he was unable to corral it and it resulted in an interception.

“We definitely didn’t play up to our capabilities,” said Murray, who was 22 or 33 for 274 yards and no touchdowns. “You get beat when you play a good team like that … we just have to be better.”

Henry Black will take this.

Along with miscommunication on plays, the Cardinals were also plagued with injuries on both sides of the ball. Center Max Garcia was ruled out Thursday pregame, paving the way for third- stringer Sean Hayward to take over at center.

DeAndre Hopkins exited the game early in the first half with a hamstring injury. On separate occasions he tried to re-enter the game but exited a short time later. The Cardinals found out this week they would likely be without J.J. Watt for an extended amount of time – potentially for the season – as he is set to have shoulder surgery sometime next week, according to Kingsbury.

At one point, running back Chase Edmonds left with a shoulder injury but managed to come back in Arizona’s next offensive series. Third string running back Jonathan Ward, who aside from Edmonds and James Conner was the only active running back, left in the second half with a concussion after a violent hit on a kickoff.

Rookie linebacker Zaven Collins exited the game with a shoulder injury and didn’t return, which left the already short-handed Cardinal defense in the hands of veteran linebacker Jordan Hicks, who finished with a team-high seven tackles.

“Obviously, we wished we had (Watt and Collins) out there,” Hicks said. “The physicality, leadership. Zaven, the way he plays fast, downhill, we wish we had both of them. Again, that’s not an excuse. We have to play better with the guys we have out there.”

Hicks went on to credit the Packers offense, specifically the run-game with Aaron Jones and AJ Dillon. The duo combined for 137 yards and a touchdown. Rodgers finished 22 of 37 for 184 yards and two touchdowns, both of which to Randall Cobb with three of his top wideouts – Davante Adams, Allen Lazard and Marquez Valdes-Scantling – out.

“That fourth down stop is what this defense is,” Hicks said. “It’s what we’ve been all year. Obviously, we wish we had some plays back, cut down on some of the mistakes, tackled better. But that is a really good offense no matter who they have at receiver, no matter who they have out there. As long as 12 is out there that’s a really good offense.”

Who here picked up Randall Cobb this week and started him 😏 pic.twitter.com/RNtIITtMid

The Cardinals’ best drives came at the beginning and end of the game, when Chase Edmonds took a direct snap for an 11-yard score early in the first quarter and when Arizona had a chance to win at the end. Running back James Conner accounted for Arizona’s other two touchdowns, scoring on runs of 2 and 9 yards.

The Cardinals continuing their undefeated streak was never a given. A loss was bound to happen, especially against a team like the Packers on a short week. But they now have an opportunity to recover and go back to the drawing board to fix the miscues that ultimately cost them the game.

“I visualize all of it,” Murray said. “The undefeated season, obviously it’s a thing you think about but you’re going to face adversity, it’s the NFL. We fought the whole game we just came up short. It is what it is.”