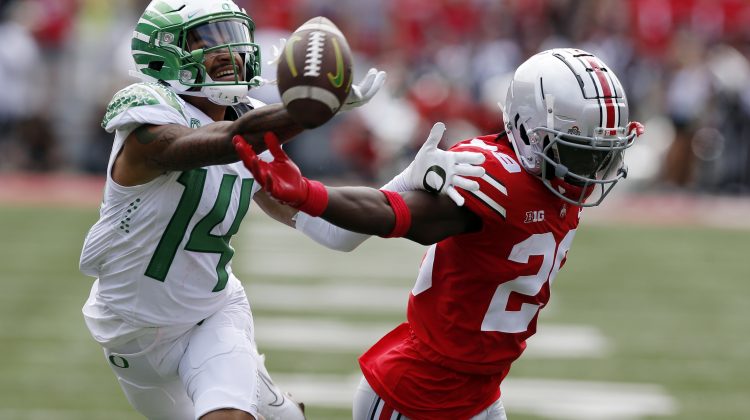 Oregon went to the hallowed ground Saturday without its star player, held off mighty Ohio State in the fourth quarter, and came away with perhaps the most significant regular-season victory for the Pac-12 in a quarter-century.

A two-touchdown underdog missing All-American defensive end Kayvon Thibodeaux, the Ducks controlled the line of scrimmage, were nearly flawless with their execution, and matched Ohio State’s vaunted talent in the 35-28 win.

Combined the stunning result with UCLA’s win over LSU last week and the Pac-12 has beaten the 2019 national champions (LSU) and the 2020 national runners-up (OSU) in the first two weeks of the season.

The conference’s image, so battered over the years, is in recovery mode — not unlike the transformation that occurred on the basketball court last March.

“The two biggest wins of the season so far,’’ FOX analyst Joel Klatt said of the Oregon and UCLA results. “You talk about putting the Pac-12 back in the middle of the playoff situation …

“What a monumental day for the entire West Coast.”

The victory clearly stands as the most significant non-conference regular-season win for the Pac-12 since the College Football Playoff era began in 2014.

There is only one serious contender:

Oregon’s 46-27 victory over seventh-ranked Michigan State early in ’14, which cleared a path for the Ducks to reach the CFP in its first year.

But back then, the Pac-12’s reputation wasn’t nearly as battered. The Ducks and Stanford had been regular participants in major bowls and the Heisman Trophy race. Nobody was mocking the conference’s performance on the national stage.

And when Washington reached the CFP two years later, the Huskies did not play any marquee games outside of the league.

In fact, Oregon’s win is arguably the most important for the conference in the past quarter century.

— USC’s season-opening victory over No. 6 Auburn in 2003, which helped propel the Pete Carroll dynasty to the upper reaches of the sport.

— USC’s win over Notre Dame in 2005 in the famous ‘Bush Push’ game. But while it was indisputably a classic game, the Trojans were well established at that point and so, by extension, was the conference.

— Oregon’s 34-33 victory over No. 11 Oklahoma, which featured a controversial finish and blown call by Pac-12 officials.

— Oregon’s 48-13 stomping of Tennessee in the 2010 season, in the heart of SEC Country — a victory that put the Ducks on the fast track to the national championship game.

But none of those stand up to the outcome today in Ohio Stadium, at least not based on what we know right now:

That Oregon’s in the playoff race.

That Ohio State likely will be, as well.

And that the narrative surrounding the conference will change because of the Ducks win.

To carry monumental importance, a victory must open a path to the national championship for winner and resonate widely across the conference. It must evaluate the stature of the collective.

Oregon’s victory could have a substantial impact on the Pac-12’s overall position in the playoff race — regardless of which team emerges.

Yes, the Ducks are a serious contender at this point. Yes, they now have more cushion in conference play; one league loss won’t derail them. (No team has gone undefeated in Pac-12 play since the Ducks in 2010.)

But don’t forget this vital piece:

Any team that was to overtake Oregon and win the Pac-12 title will have beaten the team that beat Ohio State.

In our view, the only win that carries a comparable value came in 1996, when Arizona State stunned Nebraska in the third game of the season.

The Cornhuskers were the two-time defending national champs and ranked No. 1 at kickoff.

On a raucous night in Tempe, they were shut out, 19-0, by an ASU team with Pat Tillman and Jake Plummer.

The victory propelled the Sun Devils onto the national stage: They won the Pac-10, played Ohio State in the Rose Bowl, and finished the season ranked No. 4.

At the time, the conference was coming off three substandard seasons in which it was absent from the top of the AP or the national title picture.

It was down, it needed an injection, the Sun Devils delivered.

A quarter-century later, Oregon has done the same.