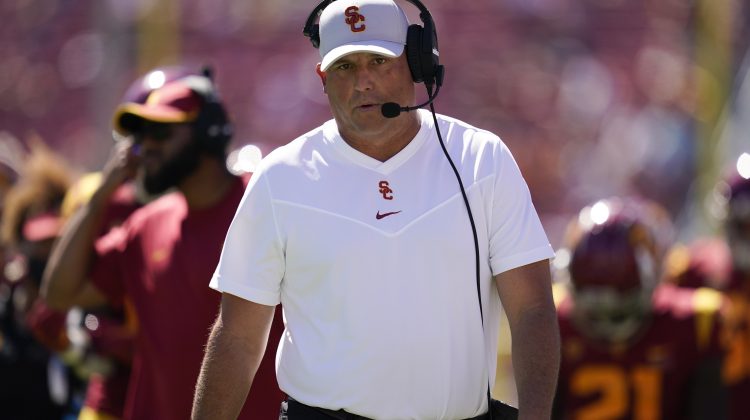 USC’s dismissal of Clay Helton on Monday, two days after another embarrassing loss, was jolting.

Not because Helton deserved to keep his job after so many years of stagnation.

Not because the evidence was flimsy.

Not because we’re only two weeks into the season.

But because the movie was so unlike the USC that we had come to know — the USC that accepted mediocrity from its blue-blood football program and handled administrative matters with a knack for incompetence.

But athletic director Mike Bohn, on the job for less than two years, isn’t a former USC player collecting a paycheck and playing golf and signing autographs and living forever in 1973.

Bohn is a real college sports administrator with experience in the field who sees the landscape and recognizes this is a moment in time the Trojans cannot afford to let pass.

And that moment has nothing to do with which coaches may or may be available when it comes time to make the hire.

— The wording in Bohn’s statement was exactly what USC fans want to hear and, frankly, what the fans of a program with seven AP national titles and seven Heismans deserve to hear.

“I want to be exceptionally clear: our university and its leadership are committed to winning national championships and returning USC football to glory.”

Bohn’s statement also covered his bases, noting that the Trojans have plowed immense resources into the football program and weren’t willing to watch them go to waste:

“The added resources carried significantly increased expectations for our team’s performance, and it is already evident that, despite the enhancements, those expectations would not be met without a change in leadership.”

USC spent two years refurbishing the body of the program and hoping that would fix the head.

But the program’s greatest flaws — the lack of accountability, discipline, and toughness — were never going to change without new leadership.

— It’s the third time in the past decade the Trojans have fired a coach during the season — first Lane Kiffin, then Steve Sarkisian, now Helton.

A national search will be conducted with deep pockets and a willingness to devote whatever resources are necessary to find the right coach. A coach is worthy of USC’s tradition.

But it won’t be a former player or current assistant.

At the end of the 2018 season — after the Trojans had gone 5-7 and it was obvious to anyone with football sense that Helton could never remake USC into USC — athletic director Lynn Swann released his infamous statement of support.

From there, it has been Groundhog Clay, one year after the next with Helton on the hot seat in some way, shape, or form.

Sure, the Trojans won the South last season; they stumbled and recovered on the recruiting trail, but the on-field product is essentially the same.

All that potential wasted.

Bad for the teams because the Trojans might hire a coach who maximizes the program’s potential, dominates on the recruiting trail, and lays waste to the conference — essentially, Pete Carroll II.

Good for the Pac-12 because the conference needs USC to thrive like it needs UCLA basketball to thrive.

— The decision cannot be evaluated in the vacuum of the present or the recent past, where a former dynasty, battered and wrecked, is finally out of patience.

It’s also about the future.

And what’s coming around the bend?

Only the Pac-12 galvanizing behind new commissioner George Kliavkoff.

And the alliance with the Big Ten and ACC.

And the expansion of the College Football Playoff.

And the Pac-12’s media rights negotiations.

And the potential for additional realignment.

And the restructuring of the NCAA, perhaps with the Power Five eventually breaking into two tiers and the top brands forming a mini-NFL.

Those are huge issues.

USC wants to be a leader in the conference, wants to own leverage at the table and in the back rooms, wants to be part of the club with Alabama and Ohio State and Oklahoma that sets the agenda and blazes the path to whatever the sport becomes.

They must have an elite coach, and they must win at an elite level.

Helton was never going to take them there.

It took an athletic director with no USC ties to make the move that gave USC the chance to be USC again.

The present and the future are at stake for the Trojans and the conference.