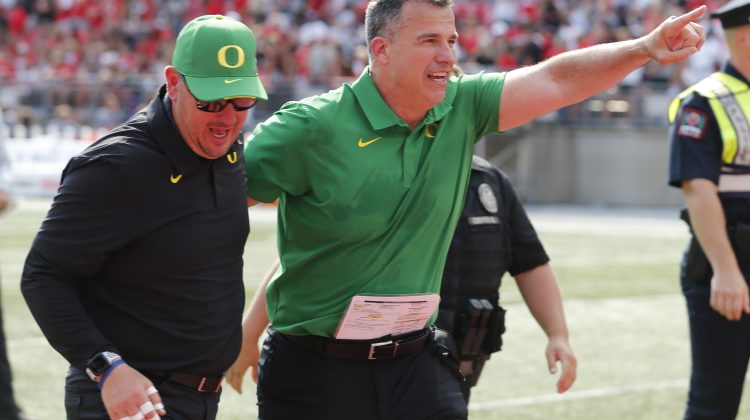 After producing the Pac-12’s most significant non-conference victory of the playoff era, Oregon is ideally positioned for the playoff.

The Ducks must keep winning, of course, but not quite to the level required if they had lost to the Buckeyes.

The 35-28 victory in Columbus was all about widening the path and creating a cushion in conference play.

Our assessment is framed by two conflicting forces of recent history:

— No team has gone undefeated in the Pac-12 since the conference split into divisions in 2011.

— No two-loss team has made the College Football Playoff since the event was formed in 2014.

In other words, one loss outside of league play necessitates an unprecedented run through the round-robin schedule in order to reach the CFP.

But the Ducks, who face Stony Brook this weekend, will emerge from non-conference play with three wins, zero losses, a gold star on their resume and what could be a season-saving cushion.

Nine weeks of perfection is no longer required.

They can afford a slip-up in the Pac-12.

Think back to the 2019 season, when Oregon’s loss to Auburn in the season opener killed its margin for error. When the Ducks stumbled for the only time in conference play — at Arizona State — they were effectively eliminated from the CFP.

Not even a decisive win in the Pac-12 championship a few weeks later could salvage their case for the CFP.

But in 2021, they have won the equivalent early-season showdown. Should they lose somewhere along the Pac-12 road, it would be their first loss, not their second. The CFP path would remain open.

Of course, this exercise presumes they only lose once in league and cap the season with a Pac-12 title. But it’s Week Three and all things are possible, so let’s plow forward and imagine the Ducks as a 12-1 conference champion.

Is there any chance they would be left out of the CFP?

There are three historical comparisons in the seven years, each with a differing degree of relevance.

1) In 2014, the inaugural season, TCU and Baylor tied for the Big 12 title; each team had one loss; both were left out of the playoff.

Baylor held the edge by virtue of its head-to-head victory but played an ultra-soft non-conference schedule (Buffalo, SMU and Northwestern State) that kneecapped its CFP credibility.

The selection committee’s decision was only controversial in Big 12 country.

2) In 2018, Ohio State finished as a one-loss Big Ten champion but didn’t make the CFP cut — in fact, the Buckeyes finished No. 6 in the committee’s final rankings.

But the blemish on their resume was significant: A blowout loss (49-20) to a mediocre Purdue team.

That result, combined with inconsistent play through the season and the absence of a marquee non-conference win, severely undermined OSU’s case.

So while the Ducks can probably afford a loss in Pac-12 play, they might want to avoid an embarrassment, especially against a so-so opponent.

3) The final comparison is the most relevant, by far: Oklahoma in 2017.

The Sooners lost once in the Big 12, at unranked Iowa State, 38-31. But they made the CFP without any controversy because of a Week Two non-conference victory … at Ohio State.

On Sept. 9, 2017, the Sooners (with Baker Mayfield) beat the second-ranked Buckeyes decisively, 31-16, and rode that win through a one-loss Big 12 season … and through a Big 12 championship … and into the playoff.

And it wasn’t even close: Powered by the victory over Ohio State, which finished No. 5 in the CFP rankings, Oklahoma was the No. 2 seed.

That’s the model for the Ducks.

They can drop one game in conference play and not panic.

As long as it’s not a blowout loss and they take care of business in Las Vegas on the first Friday of December, their CFP invitation will be waiting.