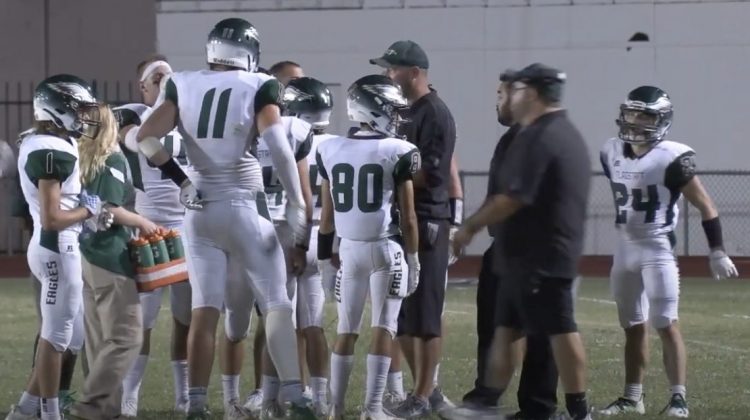 Coming up with a game plan for a 6’8″ two-way standout player is hard enough on its own. Doing so in a three-day window is next to impossible.

Flagstaff senior tight end/defensive end Nick Morrow made sure that the Thunderbird Titans learned this lesson in the most agonizing way possible, scoring touchdowns on each side of the ball and adding a blocked punt for good measure in the Eagles’ 42-11 victory.

The Titans, now 2-2 on the season, did everything in their power to limit Morrow’s impact on the game, all but refusing to run the ball in his direction when he lined up at defensive end and pushing the boundaries of AIA’s pass interference rules when he checked in at tight end. Nevertheless, he made his opportunities count when he got them, thus destroying Thunderbird’s ambitions of winning two games in four days.

Morrow, who committed to California in August after mulling over offers from Baylor, UNLV and Northern Arizona, is one of the highest-rated recruits from Flagstaff in recent memory. Friday’s 42-11 victory propelled the Eagles to their first 4-0 start since 2017, and head coach Sean Manning says that the excitement surrounding Morrow’s recruitment has also created opportunities for his teammates to grab the attention of college scouts.

“It kind of gives our other kids an opportunity to be looked at, honestly,” Manning said. “When they come out to take a peak at Nick, they can’t help but see guys like Spencer Smith and Collin Doucette and Jake Weidinger. It definitely helps them play better.”

Morrow’s recruiting journey seems to have come to a close with his commitment to Cal, but Flagstaff’s other stars could see their own stocks skyrocket if the team can keep up its current pace. The Eagles have looked like one of 4A’s best through four weeks, and they are eager to make the good times last as long as possible.

If Morrow continues to be as much of a force as he was Friday, that goal seems well within reach.

@Sports360AZ D can’t stop anything or tackle. Offense has gone conservative. Afraid to throw the ball. And when they do. WR can’t catch it.
View on Twitter
0
0

ASU is melting down in Salt Lake City: Utah has scored 21 unanswered points as Rising hits Kuithe again and the Utes take their first lead - 28-21 with 11:49 to play.
View on Twitter
3
7

End of the third quarter: ASU 21 Utah 21. Quarter dominated by the Utes who are on the move again near midfield.
View on Twitter
0
1

Utah has scored 14 unanswered points and tied the game at 21 after Cam Rising’s 20-yard dart to tight end Brant Kuithe. 6:20 to play in the 3rd quarter.
View on Twitter
1
0

Utah starts the second half much like they did the first, scoring a touchdown. Tavion Thomas 7-yard rushing touchdown. 21-14 ASU with 10:21 to play 3rd quarter.
View on Twitter
0
0

ASU extends their lead to 21-7 as Daniels hits Curtis Hodges on a beautiful throw down the seam from 15 yards out. 6 plays, 63 yards in just 2:28. Less than a minute to play before halftime.
View on Twitter
0
0