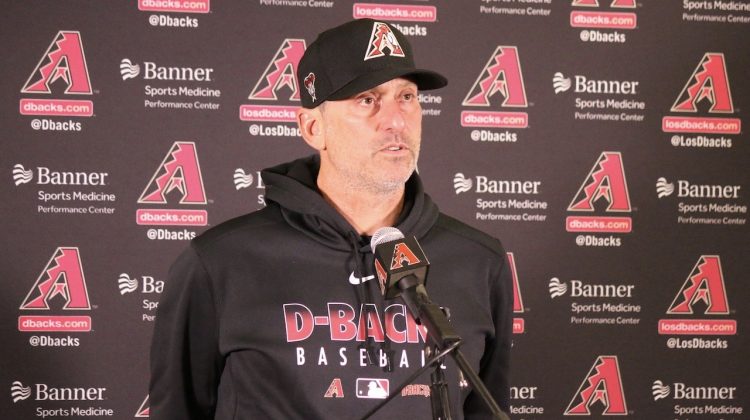 In an offseason that is full of big questions for the Arizona Diamondbacks, one of the first and most important decisions has been made: Torey Lovullo will remain the team’s manager.

The club announced Lovullo will be the the manager in 2022 with a team option in 2023 as well.

This comes as a surprise to some as the Snakes are the worst team in Major League Baseball and are currently 51 games out of first place in the NL West.

While Arizona saw success and consistency in Lovullo’s first three seasons with the club, the team has been in the cellar during the shortened 2020 season and this year.

In Lovullo’s first season as manager in 2017, the Diamondbacks had one of the most impressive bounce-back seasons in baseball, posting a 93-69 record and heading to the postseason.

In 2018, the Diamondbacks underachieved and held an 82-80 record. After losing the likes of Paul Goldschmidt, Patrick Corbin and A.J. Pollock, the team was a surprise again with a 85-77 record and narrowly missing the playoffs.

After going “all-in” for 2020 and acquiring Madinson Bumgarner and Starling Marte, the shortened season was distastrous for the Diamondbacks at a 25-35 record.

This year, the club holds a 48-104 record and are in-line for the top pick in next year’s MLB draft.

Entering the year, it was no secret the San Diego Padres and Los Angeles Dodgers were gearing up for a battle of titans. The talent gap between them and the D-backs was a wide one, and that was before anyone anticipated the San Francisco Giants to be on the verge of winning 100 games this year.

Sounds like @Dbacks Torey Lovullo will have significant say over what happens with his coaching staff. The entire staff is in the final year of their contracts.

While Lovullo defenders would point out that any manager would struggle after absorbing injury after injury on a thin roster, some thought the skipper’s voice may have lost its effectiveness in the clubhouse after the last two seasons.

A one-year deal with an option for a second year gives both sides stability and flexibility. Lovullo continues as the manager as Mike Hazen tries to rebuild the roster. If things continue on the tracjectory it’s been on the past two years, the club can move on without being tied to a long-term deal.

I'm glad to see @Dbacks have extended the contract of manager Torey Lovullo. He is not the problem with the @Dbacks IMO.

This also isn’t the first time Hazen went the patient route when all signs pointed to blowing things up. When Hazen and Lovullo got to Arizona, the Diamondbacks were coming off a 69-93 season where they were expected to make a deep playoff run. Rather than making a swift decision that no one would have blamed them for, Hazen kept the bulk of the roster in place. The “big” deals were adding Fernando Rodney and making a trade for Taijuan Walker and Ketel Marte, who had minimal MLB service time.

When addressing media earlier this week, general manager Mike Hazen said the front office would need to examine the team’s approach this offseason, but one of the first decisions that needed to be made would be Torey Lovullo’s future.

Now that Lovullo knows he’s manning the top step of the dugout for at least the next year, the team now needs to focus on building a product on the field that a manager can succeed with.