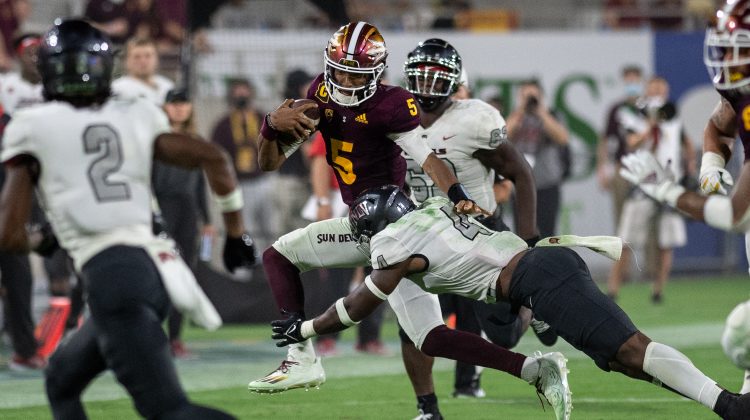 However, there is work that needs to be done, especially in the passing game. To fix this, Jayden Daniels is already spending plenty of time in the office breaking down film alongside Herm Edwards.

“We haven’t made a lot of explosive plays,” Edwards said about the Sun Devils’ passing game. “When you think about passing, you want to be able to do that. A lot of time we’re a little bit off schedule.”

The ability to make off-schedule throws is what separates great quarterbacks from good ones. That’s the step Edwards is waiting for Daniels to take.

One set back for this development in Daniels’ game is a lack of continuity with this young receiving core. Guys like Johnny Wilson and LV Bunkley-Shelton are supremely talented, but the trust isn’t fully developed.

“When you’re not familiar with what your guys are going to do, it’s difficult,” Edwards said. “You’ve got this clock in your head… when the clock expires, now you’re off schedule. When you get off schedule, what are your receivers doing? It’s not a planned deal, you just see it.”

Against UNLV, Daniels struggled to progress through multiple reads. He made up for this by running, and running a lot. In fact he ran 13 times while notching a career best 125 yards. This is a recipe for limited success. This is why Edwards’ hopes to see his passing game take a leap forward.

The slight comparison Edwards made with Daniels is to Kyler Murray. Only in reference to the ability Daniels has the ability to make off script passes. He just needs to make sure he is patient enough to do it.

“It’s all about how Jayden is adjusting with his eyes,” Edwards said. “The off-schedule quarterback presents the biggest problem, because all of a sudden the back end of the defense breaks down.