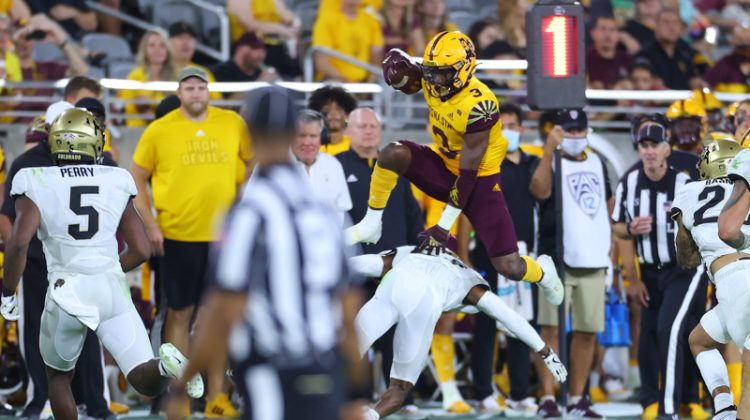 Arizona State was eager to put last week’s blunder against BYU behind it Saturday against a Colorado team on a downward trend.

Fans expected an onslaught early on from quarterback Jayden Daniels and the Sun Devil offense. Instead, they once again saw a slow start offensively that was masked by an impressive performance from the Sun Devil defense.

Nonetheless, the Sun Devils showed improvement from last week in their 35-13 win over the Buffaloes to begin Pac-12 play. Especially when it came to costly penalties.

“It was more of a complete game,” Arizona State head coach Herm Edwards said. “The thing about last week, for me, I’ve never witnessed that. We talked about it all week and we got it cleaned up some. Now we have to continue to clean it up.

“It was good to bounce back after something like that.”

Arizona State was penalized 16 times against BYU for 121 yards. Several of those came in crucial moments of the game.

Saturday was a different story. The Sun Devils were flagged just seven times — four of which in the first half. Arizona State’s first penalty, a holding call on a long run by Daniels, came nearly 11 minutes into the first quarter.

That helped Arizona State find a slight rhythm on offense, as Daniels led the Sun Devils on a 6-play, 45-yard drive that ended with him scoring on a 7-yard zone read. Arizona State’s second touchdown of the first half came after a 7-play, 72-yard drive capped off by an 11-yard run from redshirt senior running back Rachaad White. But those were all the points Arizona State was able to muster in the first half despite 138 passing yards from Daniels against a Colorado secondary that many figured to be the strength of its defense.

“In the first half we had sustained drives we just couldn’t capitalize,” Daniels said. “That was the main thing we harped on in practice and we harped on at halftime. We went out there and executed.”

Like it did in the first half, Arizona State’s defense shined in the final two quarters of play. Redshirt freshman defensive tackle DJ Moore, who had one solo sack and was part of another in the first two quarters, continued to put pressure on Colorado freshman quarterback Brendon Lewis. He and the rest of the Sun Devils front-seven combined for 3 total sacks but had several quarterback hurries.

As a whole, Arizona State’s defense had 8 tackles for loss. Linebackers Merlin Robertson and Darien Butler led the way with 9 and 7 tackles, respectively.

Colorado’s offense managed to achieve 250 total yards in the game, 108 of which came in the first half. But the Buffaloes were held to just one touchdown on the night, which came on the their most successful drive, an 8-play, 75-yard series in which they torched the Sun Devil defense on the ground.

But Arizona State quickly regathered itself and held Colorado to a field goal the rest of the way.

“We were harping in practice about the penalties, and the emphasis was come out and play a clean game,” Butler said. “We cleaned it up and did exactly what we thought we could do. It was just that first drive (in the second half).”

Much like it did in Arizona State’s last home game against UNLV on Sept. 11, the defense’s ability to force three-and-outs allowed the offense to find a rhythm.

An end-around to wide receiver Elijhah Badger, his first touch of the year, resulted in a 17-yard touchdown to open the second half. In the fourth quarter, a double pass from Daniels to wideout Ricky Pearsall to White went 30 yards for the Sun Devil score.

That play was one White had hopes he would have an opportunity to run after last year against UCLA.

“We ran that play last year against UCLA and I ended up getting tackled deep down field,” White said. “Ricky came to me on the sideline, and he asked me, ‘are you going to score for me?’ Ever since then I’ve had it in my head. It’s just a great play. We’re having fun out there.”

The Sun Devils scored four total touchdowns on the ground against Colorado, the last of which a 15-yard run by Daniels late in the game. He finished 18 of 25 through the air for 236 yards. He also rushed seven times for 75 yards and his only two scores.

Daniels was one of six rushers for Arizona State who combined for a total of 167 yards. White, despite 11 carries, had just 37 yards on the ground. But he made up for it with 70 receiving yards.

Edwards said he was pleased overall with the way his team responded after last week’s debacle. He told his team to not play “cautious,” and was impressed with the way they maintained control throughout the entire contest.

He knows Arizona State (3-1, 1-0) will have to maintain that level of play when they travel to Pasadena next week to face UCLA (3-1, 1-0) in what could be a battle of ranked teams and one that sets up the winner to control its own destiny in the Pac-12 South. He also knows if they have a similar outing with penalties like they did the last time they were on the road, it won’t turn out well.

Here’s a photo gallery of the night 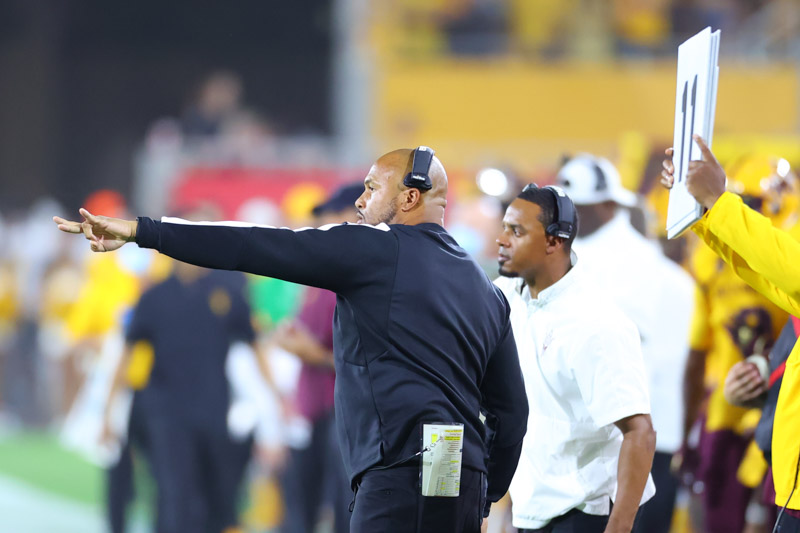