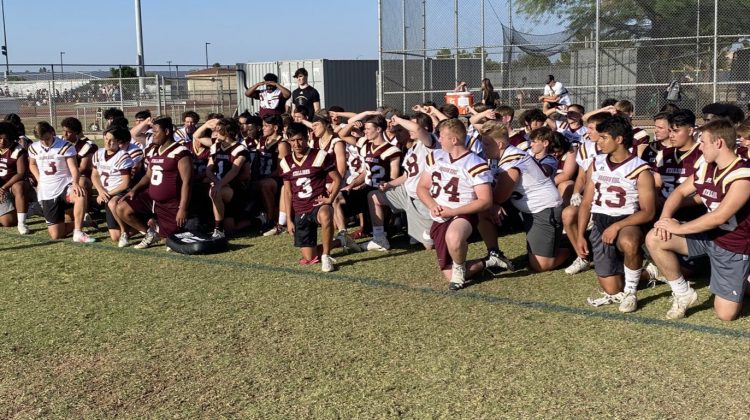 Story by Dominic Stearn
Coming off two straight winning seasons, the Shadow Ridge Stallions are looking to build on the success of 2020’s 6-3 season.
“There is an understanding of the necessary dedication required to improve and take this team to the playoffs,” Shadow Ridge head coach Sean Hegarty said.
Year one under coach Hegarty did not proceed how he expected it to be given the COVID-19 protocols. Nonetheless, Shadow Ridge saw their best season since 2013 when they went 9-3.

Rise and shine west side!!! Ready for a great practice!!! pic.twitter.com/2hfoW6LPKa

Leading into this season, Hegarty was able to instill a full schedule of offseason practice in the spring and summer. They were even able to attend a camp in Payson to become closer as a team and better as a football program.
The Stallions came in prepared for their season opener last week, defeating Westview 54-0 in quite the opening statement.
Quarterback Seth Gallardo is coming off a historic season at Shadow Ridge, as he broke several school passing records. He threw for 1671 yards and 24 touchdowns while also rushing for 371 yards and three touchdowns. To open his senior season, Gallardo did a lot of damage with his legs, finding the end zone four times and picking up 113 yards on the way.
Junior Anthony Garcia is the premier running back. He ran for 100 yards and two touchdowns in the opener, already matching his touchdown total from 2020 and well on his way to reaching the 573 rushing yards from last year.
On defense, sophomore linebacker Memphis Palelei impressed the coaching staff to be a starter this year. His performance last week backed them up as he led the team in tackles with 12, while four of them were tackles for loss.

“Our linebackers are a tough group who should give opponents a difficult time this year,” Hegarty said.
Another linebacker who is poised for a strong year is junior Jacob Cano. He notched 26 tackles in his sophomore season and was third on the team in the opener with four tackles.
Senior Micah Hendricks is a player to also watch out for. Hendricks is listed as a linebacker and safety, but will primarily play safety given the abundance of talented linebackers for Shadow Ridge.
“[Hendricks] is an intelligent athlete who plays multiple positions on defense,” Hegarty said.
He only recorded two tackles last Friday, but is expected to pad the stat sheet more as the season goes on.

After a winning season in 2019, the Shadow Ridge students weren’t able to show up and support their team and classmates for their even stronger 2020 campaign. The student section was back for the Stallions gave them the extra energy needed to shut out Westview.
“There seems to be a positive buzz about the season and students are excited to be able to attend games this year,” Hegarty said. “I am excited about getting our student section back this year, it will be great to have our student body cheering for us every Friday night.”
Shadow Ridge will host the Canyon View Jaguars September 10 for their second straight home game to start the year.
Share Tweet Share
Shadow RidgeShadow Ridge Stallions