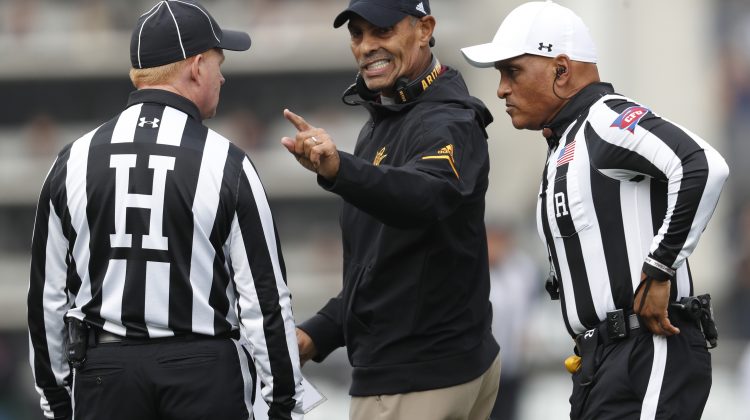 The most important Pac-12 football season in ages begins in force this week with three games against Power Five opponents and five against the Group of Five.

In other words, there’s more risk than reward.

Multiple losses to Group of Five teams could offset victories in other games — unless one of those victories comes in the Rose Bowl.

If UCLA beats LSU in prime time, little else will matter.

The Pac-12 desperately needs big wins … wins over blue bloods … wins that resonate nationally … wins that change the narrative of a conference left behind.

There are a handful of chances in the opening weeks, with UCLA the first to take center stage.

We like the Bruins this week, both against the spread and to win outright.

All picks against the spread
Lines taken from vegasinsider.com
All times Pacific

Stanford +2.5 vs. Kansas State (in Arlington, Texas)
Kickoff: 9 a.m. on FS1
Comment: Tough assignment for the Cardinal with the travel, the early kickoff and a new quarterback (Jack West or Tanner McKee). But Stanford thrived as nomads last season and the against-all-odds mentality should carry through the opener. Mistakes, or lack thereof, will be the difference. Pick: Stanford

Oregon -20.5 vs. Fresno State
Kickoff: 11 a.m. on Pac-12 Networks
Comment: Classic trap game for the Ducks, who have grand expectations, a showdown looming at Ohio State and a new quarterback (Anthony Brown). Their opponent has already played — FSU crushed Connecticut last weekend — and won’t be intimidated. (Quarterback Jake Haener started his career at Washington.) Expect misfires early from Oregon but just enough big plays in the second half to avoid a pressurized finish. Pick: Fresno State

USC -14 vs. San Jose State
Kickoff: 2 p.m. on Pac-12 Networks
Comment: SJSU has several legitimate playmakers, a quarterback (Nick Starkel) who could start in the Pac-12 and the competitive advantage of having played last weekend. If the Trojans aren’t fully locked in — color us skeptical — this will be in doubt into the fourth quarter. If the Spartans win, the proper reaction would be one of merely mild surprise. Pick: San Jose State

Oregon State +7 at Purdue
Kickoff: 4 p.m. on FS1
Comment: Leave it to the Beavers to plant the Pac-12 banner in Big Ten country. (No, West Lafayette isn’t Columbus, but it still counts as Big Ten country.) We are bullish on their offensive line and would have leaned to OSU with a much lower point spread. The touchdown makes this a no-brainer. Pick: Oregon State

UCLA +3.5 vs. LSU
Kickoff: 5:30 p.m. on FOX
Comment: The Hotline picked the Bruins to win outright in our season preview, and their performance against Hawaii certainly didn’t provide fuel for second-guessing. However, LSU’s difficult situation this week — uprooted for practice, playing for a hurricane-ravaged state — does change the dynamic. We’ll take UCLA and the points, but with some trepidation. Pick: UCLA

Arizona +11.5 vs. Brigham Young (in Las Vegas)
Kickoff: 7:30 p.m. on ESPN
Comment: The Wildcats have (slightly) more talent than they displayed last year, will be highly motivated to change the narrative and should look more competent than expected. Meanwhile, the Cougars aren’t as good as they were following the departure of star quarterback Zach Wilson. Those colliding dynamics should result in a thrilling debut to the Pac-12 presence in Allegiant Stadium. Pick: Arizona

Cal -3 vs. Nevada
Kickoff: 7:30 p.m. on FS1
Comment: If you’re wondering why the Bears aren’t favored by a touchdown (or more), we’ll introduce you to Nevada quarterback Carson Strong, a future NFL draft pick. Also, questions persist about Cal’s offense, quarterback Chase Garbers and the caliber of playmakers on the perimeter. For one game, at least, the Bears will provide some answers. Pick: Cal

Washington State -16.5 vs. Utah State
Kickoff: 8 p.m. on Pac-12 Networks
Comment: We admittedly don’t know much about Utah State and admittedly don’t really care; this is all about the Cougars and their efficiency at quarterback with either Jayden de Laura, Jarrett Guarantano or both. We expect some glitches early and drama down the stretch — as midnight approaches. Pick: Utah State

Five-star special: Fresno State. We circled this as the five-star play for Week One back in the spring, not expecting the line to reach 20-something. Yes, please.