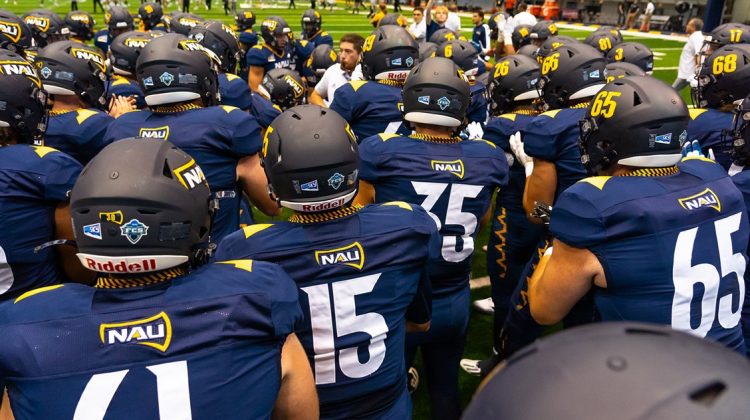 This Saturday the battle between the team up north and the team down south takes place in Tucson.

The Northern Arizona University Lumberjacks enter the weekend 0-2. The Wildcats are also 0-2 and riding a 14 game losing streak.

Two tough FCS matchups to open the season have coach Chris Ball feeling like something is missing. However, he knows his team prepares vigilantly throughout the week.

“I’ve got to do a better job of mentally preparing our guys,” Ball said. “At the end of the day we’ve got to put together a game plan that we can execute and play fast in. Then we have to be able to handle the swings of a football game a lot better.”

The matchup with Arizona marks the second game of a three week road trip for the Lumberjacks. It’s a brutal way to open any season, but Ball says his guys are embracing it.

One benefit of playing tougher teams early in the season is character and toughness is built. That’s part of the message from Ball, as he expects to compete for a Big Sky title this year.

“To be able to win a Big Sky championship you’ve gotta be able to win on the road,” Ball said. “There’s some great teams in this league and the competition that we’re playing is going to help us down the road. It’s a great experience for our team.”

Every year, NAU faces either Arizona or ASU. With 74 Arizona kids on the roster, Ball knows his players enjoy playing an extra game in state 48. The parents and families love it as well.

“It’s a great game for us,” Ball said. “It’s always an away game for us, but it’s also really a local game for most of our kids. I think it’s great.”

As far as recruiting goes, this game is an opportunity to show prospects what the Lumberjacks are all about. Arizona is the bigger school and is in the FBS, but as long as NAU competes, recruiting becomes more enticing.