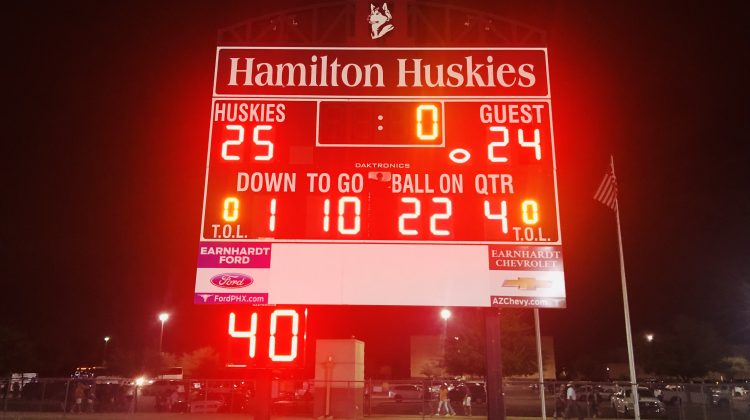 The Friday night lights can simply leave us speechless.

On a warm, muggy, insect-filled stadium in the southeast Valley, the Hamilton Huskies seized the moment…finally.

A moment no one will forget, erasing a 24-7 Bishop Gorman lead with about a minute to play and stamping an exclamation point on the comeback when tough and talented senior quarterback Nicco Marchiol kept it around the left edge and dove into the end zone for what would prove to be the winning two-point conversion with less than 10 ticks on the clock.

That was one of the craziest high school games I’ve ever seen. Bishop Gorman played a near perfect football game, but @MarchiolNicco, bleeding from the elbow, bleeding fron the mouth, and limping, led Hamilton to 18 points in less than 60 seconds. Unreal. pic.twitter.com/9X8sFE9MXe

“That’s an instant classic right there, baby,” Hamilton head coach Mike Zdebski said flashing a smile stretching from one end of Arizona Avenue to the other. “My kids pound the weight room and they’re relentless. They just kept coming.”

FINAL: @Husky_Football7 comes back from 24-7 fourth quarter deficit to knock off @BishopGormanFB 25-24 as @MarchiolNicco runs in game-winning 2-point conversion with 8 seconds to play. #FridayNight360AZ pic.twitter.com/uvFyDwHrMN

As we’ve seen from these Huskies before, they have a tendency to save their best for last and Friday’s late-game drama was no different.

After taking the opening kickoff and methodically picking apart Gorman’s Division I-filled defense, Marchiol and the offense was stuck in neutral for the next three-plus quarters as Hamilton’s line struggled to protect their quarterback.

But the Huskies kept coming and, to be frank, the 7th-ranked team in the nation fell asleep at the wheel playing their second game in six days.

HAMILTON TAKES THE LEAD. Nicco Marchiol gets the 2 point conversion.

Although Bishop Gorman’s pristine campus is located just minutes from the Las Vegas strip, lady luck was on Hamilton’s side when it counted most.

However, most of Friday night Hamilton was bullied by a team bigger, stronger, and by most accounts, more talented littered with Power 5 players on both sides of the ball. The Gaels tall, athletic secondary would make some Pac-12 schools blush.

But the Huskies never quit, seized the small window of opportunity, and took the game when it was there for the taking – something Hamilton didn’t do in small handful of recent losses to rival Chandler.

One this night, Zdebski’s team finished.

“That’s the biggest thing that we’ve talked about, the mental toughness and finish,”  he explained. “In our last four losses we had a chance, and we didn’t finish. Well, we finished.”

Oh, yes they did – and everyone around the nation saw it.