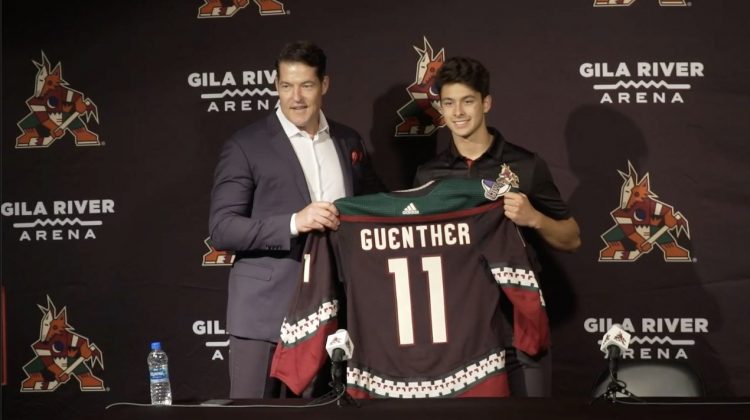 After a quiet few weeks in terms of player news, the Coyotes broke their silence in a big way Wednesday, when they formally introduced 2021 first-round pick Dylan Guenther.

Arizona selected Guenther, a high-scoring, versatile right winger with the ninth overall pick in this year’s draft following an abbreviated season in the Western Hockey League in which he logged 12 goals and 24 points in 12 games.

“This is really a dream come true for me,” Guenther said. “My first ever jersey was a Coyotes jersey. I don’t think a lot of people know that, but my dad came here and he brought me back a jersey when I was just a little kid.”

Coyotes General Manager sang Guenther’s praises throughout the press conference, but shot down any speculation that the 18 year-old might play in the NHL this season.

A passion for the game. 🏒 pic.twitter.com/EcNKHTS4QY

“He’s a young man who’s got some ways to go before he has a chance to play in the National Hockey League,” Armstrong said. There is a process to this that needs to be done properly. From my experience of being with another NHL organization, I know there’s this big rush to get to the NHL, but sometimes [the players] get there at the wrong time and that really slows down their process. We want to make sure players get there at the right time.”

Guenther may not get his NHL opportunity this season, but that hasn’t stopped him from training with the Coyotes’ veterans at Ice Den Scottsdale ahead of the team’s development camp, which starts Sep. 9. Guenther skated with the team on Tuesday, an experience which he described as surreal due to some of his future teammates’ achievements.

“You are a bit star struck when you get out there,” he said. “A guy like (Coyotes right winger) Phil Kessel, I mean, he’s won two Stanley Cups and I’ve obviously watched him a ton. I go out there and I’m passing the puck to him in a drill. I think that’s really cool and something I couldn’t imagine happening if I were to look back a few years.”

Skating it up in Scottsdale. ☀️ pic.twitter.com/lge1EpOT4i

The opportunity for Guenther to familiarize himself with the Coyotes organization and the Phoenix area, Armstrong said, is especially crucial for his development, as the young goal scorer has spent his entire hockey career up to this point in his hometown of Edmonton.

Guenther has stayed at the home of Coyotes great Shane Doan since he arrived in Arizona on Monday, and his mentorship seems to have helped Guenther ward off the nervousness that sometimes afflicts prospects entering their first NHL training camp.

“It’s a huge advantage for him to come in and get comfortable with his surroundings,” Armstrong said. “Everything is new [for him] so coming in early really helps him. He’s had the opportunity to skate with the guys out here, get used to the trainers and the strength guys and just incorporate it into that day-to-day living.”

Barring an exceptionally strong showing in development camp, Coyotes fans will likely have to wait at least one more year before can watch Guenther work his magic at the NHL level. However, they will be able catch a glimpse of him at the NHL Rookie Faceoff, which the Coyotes will host Sep. 17-20 at Gila River Arena.