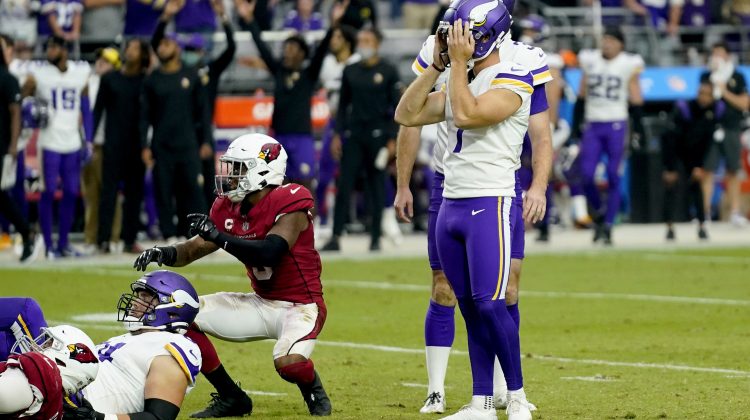 Here are five things we learned at State Farm Stadium.

1. Quite a Show…At the time this story was posted, no Week 2 NFL game produced more points than Minnesota-Arizona. Much of that can be attributed to quality quarterback play on both sides. Outside of a handful of throws, Kyler Murray was spectacular completing 29-36 passes for an even 400 yards and three touchdowns. He was intercepted twice but rushed for 31 yards and a touchdown, as well. “We just got fortunate at the end,” head coach Kliff Kingsbury said, referencing the missed field goal. “I was excited for our guys. We battled. I was proud of their fight.”

2. Pat P’s Homecoming…Nobody had to show Patrick Peterson around SFS. After all, the eight-time Pro Bowl cornerback spent a decade in the locker room across the hall from the one he exited Sunday afternoon. Despite being beaten by DeAndre Hopkins for a touchdown in the first quarter, Peterson locked down D-Hop the rest of the way, holding him to just four receptions and 54 yards. He didn’t catch a pass the entire second half. Peterson registered two tackles.

3. More Rondale Moore, Please…The early returns have been quite favorable thus far for the rookie wide receiver from Purdue and Sunday he did absolutely nothing to damage his stock. The 5-foot-7, 181-pounder consistently found open space in Minnesota’s secondary, including a late-second quarter 77-yard touchdown reception when he took advantage of a busted coverage and reeled in the deep ball near the Cardinals’ sideline before sprinting into the end zone.

“They went zone and they dropped me,” he said about the long scoring play. “When I saw the ball in the air, I said, ‘Shh, don’t drop it.'” Moore increased his production from his NFL debut last week in Tennessee (four receptions, 68 yards) to seven catches for 114 yards and the score against the Vikings.

4. Dalvin Cook(in’)…After witnessing what he put on the Cards’ defense, it’s easy to see why Dalvin Cook is one of the best young running backs in the game. The 26-year old ripped off a number of big runs, many right into the heart of defensive coordinator Vance Joseph’s front. Cook had eight touches for at least 10 yards in the first half. His 96 rushing yards before intermission were 40 more than the Cards had as a team in the first 30 minutes of game action. Arizona’s defense adjusted well in the second half. Cook totaled 131 rushing yards on 22 attempts. He also caught two passes for 17 yards.

5. No Prater Haters…In what was a crazy, high-scoring first half the culmination was some history being made on the final play. 15-year veteran kicker Matt Prater, who came over as an unrestricted free agent this past off-season from Detroit, drilled a 62-yard field goal which likely would have been good from 65.

Prater’s boot, which electrified the crowd far more than “Naught By Nature’s” halftime performance, eclipsed the previous record set by Jay Feely – a 61-yarder against the Buffalo Bills back in 2012.

The Cardinals are back on the road next week to take on rookie quarterback Trevor Lawrence and the Jacksonville Jaguars. For now, they’ll enjoy the 2-0 as they prepare to head back east.