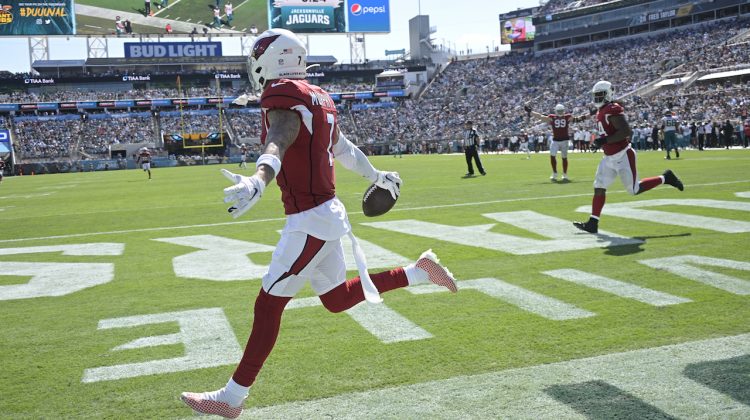 The Arizona Cardinals remained undefeated after beating the Jacksonville Jaguars 31-19 on Sunday.

After a dominant first quarter, the Bird Gang trailed the Jaguars 13-7 thanks to a kick return for a touchdown to end the first half.

But the Cardinals flexed their muscle in the second half, outscoring Jacksonville 24-7.

Here are a few things that jumped out in the win:

Murphy’s law states if anything can go wrong, it will. That’s how things went for Trevor Lawrence when he threw Byron Murphy’s way on Sunday. Murphy came away with two interceptions, two passes defended and four tackles. The former Saguaro star had the play that swung the momentum fully back in the Cardinals’ favor, returning an interception for a touchdown on a flea-flicker, giving Arizona a 24-19 lead.

While most eyes will be on DeAndre Hopkins week in and week out, two slot options have stepped up big for the Cardinals early in 2021. Christian Kirk had seven catches for 104 yards, his fourth time eclipsing the 100-yard mark. In three games, the receiver tallied 234 yards and two touchdowns.

A.J. Green has slid in nicely as another slot option to complement Hopkins and Kirk. He eclipsed the 100-yard mark for the first time as a Cardinal and since 2018. Of Green’s six catches, four of them were for first downs.

Despite a dominant first half, Cardinals found themselves tied with the Jaguars in the closing minute of the first half. The Cardinals weren’t on the right side of the 50-yard-line, but the team opted to have Matt Prater kick a 68-yard field goal attempt instead of running out the clock or having Kyler Murray take a shot at the end zone.

Prater lined the kick up perfectly, but it was a few yards short. The only problem was Jamal Agnew was waiting in the back of the end zone. He caught the missed kick and returned it 109 yards for a touchdown. Much like the famed “Kick-6” between Auburn and Alabama, many of the blockers in place for the Cardinals were out of position or not the correct personnel to make a tackle if a return were to happen.

If the kick is made, it looks like a genius decision by the coaching staff, but the result was a worst case scenario for the Cardinals, who gave an inferior opponent momentum into the half and took a significant chunk of the second half to regain the lead.

Third Down’s Not the Charm

While the Cardinals were effective in the moving the ball, tallying at least 400 total yards for the third straight game, there was progress that was left to be desired. On the day, the Cardinals converted just one of nine third downs. Entering this week, the Cardinals were 10/22 in that situation. Making matters worse, four of those attempts were 3rd and four to go or shorter. The team converted on two of those.

A bright side of this equation is the Cardinals were effective getting off the field on third downs. The Jaguars only converted 2/11 on third down attempts.

For a guy that was seemingly on the outside looking in to the starting lineup at the start of the season, linebacker Jordan Hicks sure has made a lot of plays.

The linebacker had a team-high 12 tackles along with a sack and a pass defended. Murphy’s first interception was set up by a pass breakup from Hicks. He also closed the game out by sacking Trevor Lawrence.

The Cardinals now sit at 3-0 on the year and will be facing a tough stretch of the schedule. The Bird Gang goes on the road to the Rams next week before hosting the 49ers and then head to Cleveland to take on the Browns over the next few weeks.