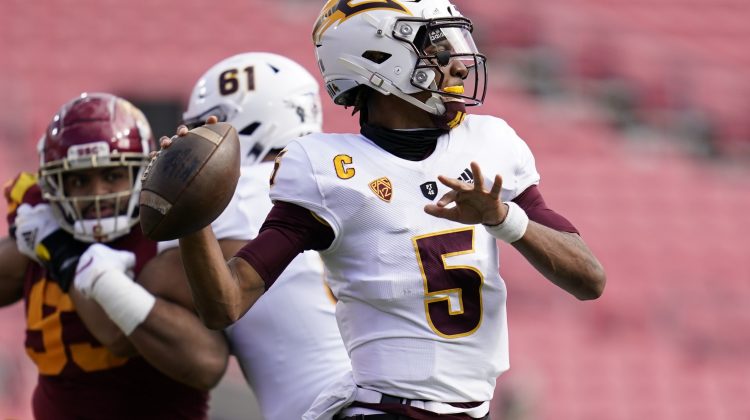 At the dawn of the 2021 season, the state of quarterback play in the Pac-12 appears fragile.

If a handful of veterans elevate their performance — USC’s Kedon Slovis, UCLA’s Dorian Thompson-Robinson and ASU’s Jayden Daniels, to name three — then the collective output should approach the standard set in previous years.

If their inconsistency continues and none of the touted newcomers emerge, this could be the worst season for quarterbacks the Pac-12 has experienced in eons.

Welcome to the final, murkiest installment in our series previewing the 2021 Pac-12 season.

We delayed publication of the Quarterback Comfort Quotient (QBCQ) rankings to this point — two days before kickoffs — in order to create maximum clarity. And still, so many teams have so much to resolve.

As always, the QBCQ takes into account the quality of the starter and the experience and talent possessed by the top reserves. After all, the backup quarterback is the least important player on the roster until he’s the most important.

The teams that grade out favorably in this exercise have high-level starters and experienced backups.

One without the other is suboptimal.

1. Utah
Starter: Charlie Brewer
Backups: Cameron Rising, Ja’Quinden Jackson, Peter Costelli
Comment: Rising started the opener for the Utes last year but was injured early and missed the rest of the season (and spring practice). Brewer, who threw 65 touchdowns in the Big 12 (for Baylor), excelled in the spring and beat out Rising for the job in training camp. That tells us the Utes are in good shape in both QBCQ categories: the quality of the starter and the caliber of the backup.

2. Oregon State
Starter: Sam Noyer
Backups: Chance Nolan, Tristan Gebbia (injured)
Comment: The Beavers announced Noyer as the starter on Monday but left open the possibility that the dynamic could change when Gebbia recovers from lingering hamstring issues. At that point, OSU will be the only team with two 2020 Pac-12 starters on the roster: Gebbia ran the offense in Corvallis while Noyer started for Colorado — and was named second-team all-conference.

3. Washington
Starter: Dylan Morris
Backups: Sam Huard, Patrick O’Brien
Comment: Morris showed promise in 2020 but the sample size was small (four starts, all at home). However, there are quality options with a five-star talent (Huard) and a former Mountain West starter. (O’Brien had 400+ attempts at Colorado State). UW might not have the best starter or second-stringer, but it goes three-deep as well as anyone.

4. USC
Starter: Kedon Slovis
Backups: Jaxson Dart, Miller Moss
Comment: No better example of QBCQ extremes than USC, where the starter could be one of the top players in the country but the backups are first-year freshmen. The Trojans would be a spot or two higher but for two issues: Slovis struggled last year; and his skinny frame will endure considerable punishment standing in the pocket 40+ times per game.

5. Oregon
Starter: Anthony Brown
Backups: Ty Thompson, Jay Butterfield, Robby Ashford
Comment: Brown took control of the job in spring practice and became the official starter a few days ago. There are talented but inexperienced options behind him in Thompson and Butterfield, so we don’t expect a long leash. But the Ducks would be better off with Brown, a former starter at Boston College, leading them onto the field at Ohio State next week. Which means he needs to show well in the opener.

6. Arizona State
Starter: Jayden Daniels
Backups: Trenton Bourguet and Daylin McLemore
Comment: The Sun Devils have a returning starter with something to prove as a pocket passer and two backups with everything to prove. But we expect a stellar season from Daniels; otherwise, ASU would be much further down the list. Bourguet has two career attempts; McLemore has none. If Daniels gets hurt, the situation turns dicey.

7. UCLA
Starter: Dorian Thompson-Robinson
Backups: Ethan Garbers, Chase Griffin
Comment: The range of possibilities for quarterback production is wide in Westwood. Will Thompson-Robinson’s inconsistency continue — he wasn’t sharp against Hawaii — or will he mature into an elite passer and lead UCLA to a first-rate season? Garbers has talent but not much experience; Griffin played last year and is a solid third option.

8. Cal
Starter: Chase Garbers
Backups: Zach Johnson, Kai Millner, Ryan Glover
Comment: Were this a list of the least interesting quarterback situations, Cal would join ASU at the top. Garbers has been the unquestioned starter all along and doesn’t have a hot-shot newcomer attempting to disrupt the status quo. Johnson and Millner are rookies, while Glover is an FCS transfer from Penn and Western Carolina.

9. Washington StateProjected starter: Jayden de Laura
Backups: Jarrett Guarantano, Cammon Cooper, Victor Gabalis
Comment: de Laura and Guarantano engaged in a tight competition throughout training camp, and coach Nick Rolovich might not publicly disclose his decision ahead of kickoff against Utah State. (Hence the use of ‘projected’ starter.) WSU could have a far better situation than this ranking indicates, but we simply haven’t seen enough from either candidate.10. Colorado
Starter: Brendon Lewis
Backups: Drew Carter, Jordan Woolverton, JT Shrout (injured)
Comment: When we published the initial QBCQ rankings many months ago, CU had three options with Lewis, 2020 starter Sam Noyer and Shrout, the Tennessee transfer. Then Noyer left for Oregon State and Shrout injured his knee, leaving only Lewis, whose lone appearance last year came in the Alamo Bowl. And behind him, there’s zero experience.11. Stanford
Projected starter: Tanner McKee
Backups: Jack West, Isaiah Sanders
Comment: The depth chart released this week lists McKee “or” West as the starter. We suspect the decision has been made — there’s no reason to inform Kansas State — and believe both will play. West has more experience, but McKee is the more talented passer. This feels like a competition that won’t be settled for several weeks.

12. Arizona
Starter: Gunner Cruz
Top backups: Will Plummer and Jordan McCloud
Comment: Coach Jedd Fisch announced two quarterbacks, Plummer and Cruz, will play in the opener against BYU. That isn’t a good sign given the level of inexperience — ideally, one candidate would have separated. Don’t discount the potential for McCloud, a former FBS starter (South Florida), to eventually emerge after he learns the offense.