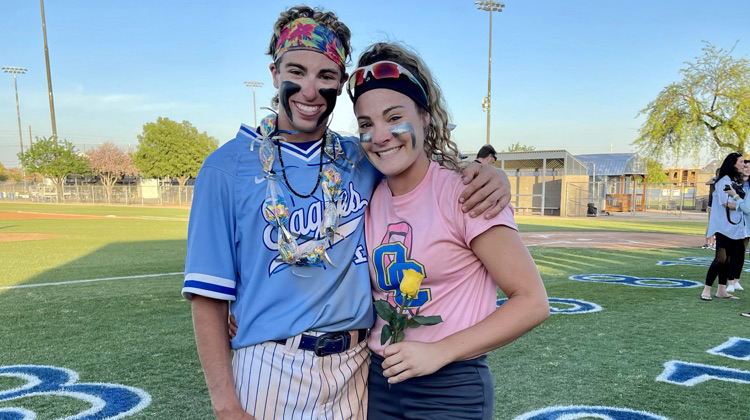 A brother and sister relationship can be complicated at times, but for Chase and Riley Valentine, it’s all about helping each other out.

The two represent Sandra Day O’Connor high school where Chase plays baseball and Riley plays softball. Despite participating in two different sports, they stick together as much as possible.

Hanging out together and working side-by-side has even helped the pair become better players.

“We’re able to bounce things off each other,” Chase said. “Since we’re both at a pretty high level at this sport, were able to see stuff, whether its with our swings, or we’re in the weight room. It’s just been a really cool experience with me and her, it seems a little different than some bother and sister relationships.”

Chase was ranked as the No. 1 shortstop in the state, according to Perfect Game. The recent graduate was committed to play at Texas A&M until some offseason coaching changes led to him opening his recruitment again.

Although he has not decided on a school yet, programs like Oklahoma State, Oklahoma and Washington State are just a few schools that have shown interest in signing him.

On the other hand, Riley Valentine has just started her recruitment process. She’s coming off a junior year that included hitting 12 home runs while batting .426 and racking up 38 RBIs.

This summer was the first-time schools could reach out to her and the coaching staff, making it a hectic month of June when the NCAA lifted the recruiting dead period.

“It’s been crazy,” Riley said. “I have schools all over me. Hundreds of coaches are at the games, which is a lot of fun. I have a couple offers right now. I’m waiting just so I can find the perfect spot that I’m going to be happy at for four years.”

Riley played mainly as a catcher last season, but she’s been known to play at varies positions including shortstop, which is her second favorite spot on the field after catching behind home plate. Her versatility on the field has set her apart from other players and is a big reason why she’s received so much interest from colleges.

“It hasn’t mattered where she plays,” Hobson said. “As soon as I started putting her at shortstop and third, she then wanted more reps there. She works really hard to be the best at where she’s at.”

Success for the Valentine siblings came early as well. In Chase’s freshman year, the team won the 5A state title. The same thing happened for Riley in 2019, with the softball program winning the state championship.

“I think people started to realize that these two are really, really close and they’re going to do some crazy things at this place,” Chase said. “Obviously, we won a state championship my freshman year and she got her’s her freshman year and it kind of built a little reputation for us being the brother and sister who both got that championship for the school.”

The relationship between the two can be seen on Twitter as well. Chase doesn’t just share his highlights and Riley doesn’t just post about her work. Instead, they share each other’s highlights which is something that has benefited both after the pandemic affected the recruitment process.

“It all really started with posting each other’s stuff,” Chase said. “Since I’m a little older, I had a little more recruitment and a little more exposure before her. I thought my outlet for me to be able to post her type of success was through my social media to help her where she needed to go. I notified that it would get a lot of views, a lot of likes and retweets and now I have people retweet my stuff on national pages.”

This upcoming season will be the first time in three years they won’t be playing for the same school, but that doesn’t mean they won’t continue to stay connected.

As Riley continues to play at summer softball events and Chase looks for a college home, their goal remains to be the best in the sport they play.

“Sports is everything,” Riley said. “I mean, me and Chase, we both want to play baseball, softball for the rest of our lives. So, this is everything for us. And we’re going to do whatever it takes to get to that next level.”