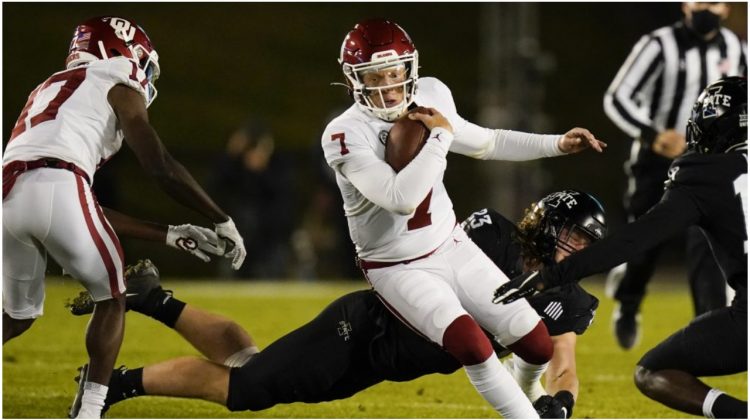 There’s good news for the Pac-12 in the build-up to the 2021 Heisman Trophy race: Two key recruiting areas, Phoenix and Southern California, have produced five of the top six preseason favorites.

The bad news, of course, is that none of the players are on Pac-12 rosters.

One used to be, then left for greener hedges.

The other four signed out of high school with powerhouses thousands of miles away.

Nothing encapsulates the Pac-12’s struggles to keep the top West Coast prospects at home like the list of 2021 Heisman betting favorites (odds courtesy of betMGM):

All but Howell are from the Pac-12 footprint:

Rattler is from Phoenix while Young, Uiagalelei, Daniels and Stroud grew up in Southern California.

Daniels, the prodigy from Mater Dei, started for USC as a freshman, got hurt, watched his backup Kedon Slovis fill the Trojans’ void, then transferred to Georgia.

Oh, and did we mention that the five West Coast products happen to play for the top five teams in the AP preseason poll?

It’s the most important position in the sport; the Pac-12 footprint continually produces elite talent; and too many of them are leaving the conference in search of glory elsewhere.

They want to win the national title, win the Heisman and ride off into the first round of the NFL Draft.

From what they’ve seen lately — from what we have all seen lately — the likelihood of hitting that trifecta is greater at Alabama, Clemson, Oklahoma, Georgia and Ohio State.

In a familiar situation: Off the pace.

Based on betting odds, the top candidate is Slovis (28/1), who has the uniform and the system (the Air Raid) to contend for the trophy if his team is successful.

There are two fringe candidates in Arizona State quarterback Jayden Daniels and Oregon defensive end Kayvon Thibodeaux. But both have narrow paths to the Heisman ceremony in New York City.

Only one Pac-12 player in 50 years has won the Heisman for a school not named USC: Oregon quarterback Marcus Mariota in 2014.

But voters across the country knew of Mariota before the first kickoff. He was a preseason frontrunner, then played brilliantly while leading the Ducks to the playoff.

It’s exceedingly difficult for dark-horse candidates from the Pac-12 to secure the necessary support in each of the Heisman’s six voting regions.

They typically play too many games on a network nobody watches and too many games at night, after voters in the Northeast, Mid-Atlantic, South and Midwest regions have turned off the lights.

In 2015, Stanford’s Christian McCaffrey broke one of the most hollowed records in the sport — Barry Sanders’ mark for all-purpose yards — and he finished second.

Why? Because McCaffrey had zero preseason hype, then collected 55% of his yards in games that started at 10 p.m. or later on the East Coast.

Name your Pac-12 candidate, real or imagined, this season or any season. If he’s not a preseason frontrunner, if he doesn’t play for USC, the path to Heisman glory is treacherous.

2. Georgia quarterback JT Daniels: He has the team, the talent and the background to generate support in every region, particularly the Far West. And that could be decisive.

3. North Carolina quarterback Sam Howell: If the Tar Heels dethrone Clemson in the ACC, the potential No. 1 pick in the draft will get the credit. And perhaps the hardware.

4. Texas running back Bijan Robinson: Played sparingly last season as a rookie but should thrive in Steve Sarkisian’s system. An immense talent who grew up in … wait for it … Tucson.

5. Iowa State running back Breece Hall: He’s a preseason All-American on a preseason top-10 team and has the needed November platform (dates with Texas and Oklahoma) to reach New York City.