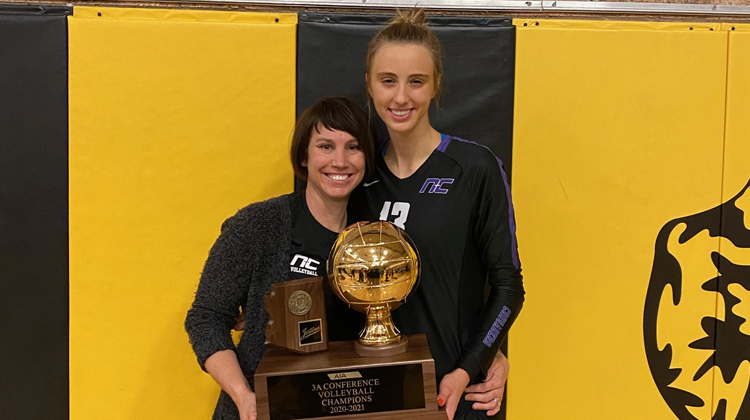 The biggest reason for the team’s success comes down to two members of the Hope family. Jenna Hope is the head coach, while her daughter Reagan, was a middle blocker on the team.

A huge congrats to ‘21 signee Reagan Hope on helping lead Northwest Christian HS to its third-straight Arizona 3A state title over the weekend 👏. #GoDucks pic.twitter.com/tCk2qcTrDZ

Reagan, who recently graduated, said she will always remember the family aspect of playing at Northwest Christian.

“I think I’ll remember the family aspect of just the school, the team, the fans, everything,” she said. “I’ve been here since I was in preschool. So, I’ve kind of grown up here and literally was raised with these people. Even when I come back, like I’m here right now, and just seeing how everyone loves to see you back. They all know, they all follow your journey.”

Much like her daughter, Jenna also played volleyball for the Crusaders and has been the head coach for the last six years. She was able to coach Reagan all four years she played in high school. After not wanting to play the sport in the beginning, she was able to see her evolve over the years.

“She had this drive that was really not typical for her age, just really wanting to be the best in the sense of doing her best at everything she did,” Jenna said. “But it was really fun to see how she caught the love for the game. And how just her determination and drive took her to it. Because trust me, in second grade, you would have been like, ‘that kid is going nowhere.’ You’re just happy she didn’t get hit in the face with the ball.”

Reagan was a crucial part to the team’s three state championships. She tallied 1,568 career kills, while serving up 208 aces and 761 total digs. In her sophomore year, she was named a state player of the year finalist as well.

She is also ranked as the No. 21 recruit in the Class of 2021, according to PrepVolleyball national rankings. Before her stellar high school performances, she committed to play at Oregon during her freshman year.

“I knew the second we pulled up to the arena before I had met anyone, I just knew this is where I
wanted to be,” Reagan said about visiting Oregon’s campus. “I’m just excited to play really high-level
volleyball with some really awesome people and celebrate and have a good time.”

Before getting started with Oregon, Reagan played this summer for Team USA in the FIVB Under-20 World Championships. It was a moment her coach and mom will never forget.

“First off, I cried all the way through the national anthem,” she said. “It just makes me proud that of who she is as a person and how she works with each team. And year, it’s kind of mind blowing to see your child when you’re watching on TV with the USA jersey on and it’s going to the same when I see her step on the Oregon court.”

It’s her mom’s support and coaching that helped Reagan become the player she is today. However, it didn’t come without the difficulties of having a parent as the head coach.

“When I was young, we would fight all the time, because we were the same personality,” she said. “But honestly, all throughout high school, it was so awesome. And it’s definitely harder because a lot of times people won’t credit my success especially when I was a freshman. They’ll try to use the excuse that your mom’s a coach, but she’s like 20 times harder on me. So, I feel like that definitely helped me as a player.”

The incoming freshman will start her collegiate journey when the Ducks play their first game of the
season on August 27.