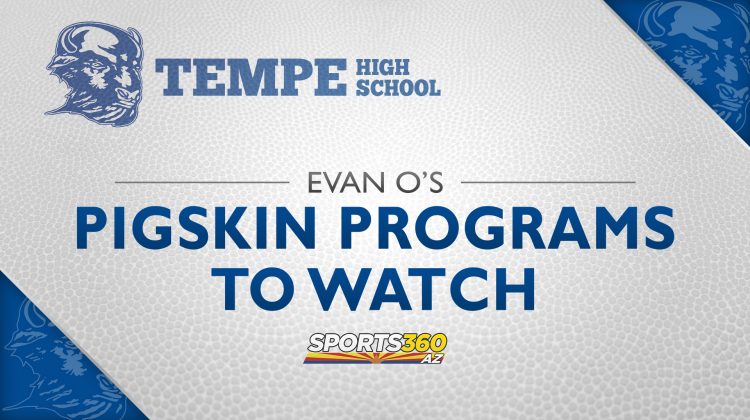 Most winless seasons are several years in the making. Whatever the cause may be – lack of talent, low participation numbers, or a culture of complacency – it often takes time for these factors to build up before a team truly hits rock bottom.

Not so for Tempe High School. In just one year, the Buffaloes went from being a playoff team to finishing 0-7 and losing every game by a margin of 12 points or more. Head coach Brian Walker resigned at season’s end, bringing his 12-year run at the school to a close and forcing the program to start from zero.

Thus began the search for a new head coach. On account of Tempe’s already thin football membership and the loss of multiple regular players due to transfers, the job would require a healthy amount of patience, and the new coach would need to be committed to staying at the school long-term.

It did not take long for Tempe’s administration to settle on Todd Hanley. Having just left his previous position at Flagstaff High School to be closer to his extended family in the Phoenix area, Hanley was a safe bet to stick around for the foreseeable future, and his two decades of coaching experience were enough to convince the school that he could oversee the impending rebuild.

In two seasons at Flagstaff, Hanley held a 10-8 record and snapped the Eagles’ twelve-year playoff drought in his first season at the helm. He will be expected to turn around a struggling program once again in his new job at Tempe, and though the Buffaloes are only two years removed their most recent playoff berth, Hanley says the situation he currently faces might be more demanding than the one he stepped into at Flagstaff.

“It’s very easy to engage the community in Flagstaff,” Hanley said. “I had boosters coming out my ears. When you compare it to somewhere like Tempe that’s very spread out, it’s very hard to engage the parents. We have kids whose families live in Laveen or North Phoenix, but their parents work in town so they still come to Tempe. It’s not lack of interest by the parents, it’s just that they have a 30-minute, 40-minute commute every day. Those kinds of things do matter.”

Tempe’s lack of a centrally-located student body makes consistently high football participation a challenge under normal circumstances, but it was a total impossibility during the COVID-plagued 2020 season. Players who relied on the school bus system to get to practices were forced to use public transit or simply miss practice, leading to a sharp decline in the program’s membership and all but guaranteeing a losing record.

Naturally, recruiting new players was Hanley’s first priority upon taking the head coaching job. When he took over, there were only 33 active players in the entire program, but Hanley was able to quickly and efficiently raise that number by seeking out players who had left the program the year prior, as well as athletes who participated in other sports. By mid-August, 75 students were cleared to play, and Hanley is hopeful that more will show up soon.

“We’re getting in the 50s, I would say, regularly at practice,” he said. “When I opened the weight room for the first time in March, there were two guys, and now we’re crowded down with the 50 or so guys working out. I’m confident that we’ll get to where that 70 number is kind of regular and just build it from there. We’ve got some talented kids, and I think it’ll take care of itself as long as I can get the numbers up.”

The sudden surge of new players has resulted in intense competition at a number of positions, particularly on offense. With few returners, Tempe’s starting lineup is still largely undetermined two weeks away from the season opener, and there will be plenty of opportunities for newcomers to get significant playing time right away. Aside from key players like jack-of-all trades offensive lineman Humberto Ledezma and two-way threats Bryan Stroughter and Ulises Ontiveros, nobody is guaranteed a primary role.

“We have a large number of guys that are o-linemen, so there’s a lot of competition there,” Hanley said. Coach Meador does a great job with the o-line and I see him interchanging guys every day because he sees something that he wants to see. We also have a lot of competition at running back. Some of those guys are returners to the program but weren’t necessarily guys that played last year, either they were backups or didn’t play. They help each other, they’re working hard, they understand that they’re going to share the load, and it’s really coming along how you would hope. Guys know that if you take a couple days off, you may not be in that rotation.”

Humberto putting in a day in the lab @humbertoledezm8 hits 505lbs. Can’t wait to see him in action this year! #EET @E_Thompson92 pic.twitter.com/ZF4ugZ9MFe

Many of the Buffaloes’ starters on offense may be new this season, but their playing style will remain mostly the same as it was under the previous coaching staff, albeit with a few tweaks. Hanley has introduced a few new concepts to make the offense less predictable, but he expects there to be a minimal learning curve for his players.

“Schematically, it’s not that far from what they were maybe running before,” Hanley said. “A little more air raid, a little more spread out, looking for mismatch type stuff. We’re really trying to teach that aspect, and zeroing in on the quarterbacks to make sure they understand the reads and what we’re trying to do. It’s really not that complicated but it can appear that way to defenses, and that’s why we like it.”

While Hanley is satisfied with the talent he has managed to accumulate in his short time as coach, he has no illusions about the status of the program, and will be basing his expectations on preparation and effort rather than wins and losses. Since taking over, he has operated under the mantra of EET – effort, enthusiasm and toughness – which he considers to be the building blocks for a winning team.

“We are looking to never be out-prepared,” he said. “If you’re going to beat a Tempe Buffaloes team, it has to be that you outperformed us, not that we hurt ourselves. I’m not okay with losses in the sense of ‘oh well, that’s okay, we lost,’ but if we come up against an opponent that outmatches us and outperforms us, there’s no shame in that. I just try to focus on taking care of our guys and taking care of our assistants and making sure this is somewhere that people want to be. I know from my experience that that will translate to wins on the field.”