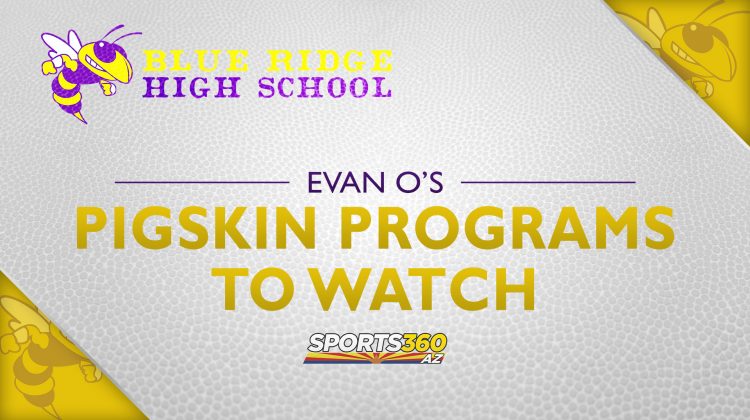 It is often said that big things come in small packages, and no high school football program in Arizona exemplifies this truism better than that of Blue Ridge High School.

Though it serves only 700 students, Blue Ridge, located in southern Navajo County at the feet of the White Mountains, has earned itself a reputation for excellence in football. In the last ten years alone, the Yellow Jackets have won two 3A state championships, won their section five times, averaging nine wins per season during that time frame.

Despite its rich history, Blue Ridge’s playoff struggles in recent years and the retirement of head coach Bob London following the 2020 season meant that the program had reached a crossroads. The school needed to hit a home run with its next coaching hire in order to get on the road back to contention, and it seems to have done just that by bringing in Jeremy Hathcock.

Hathcock, a Blue Ridge alumnus who starred on three state championship-winning teams as a player, returns to his old stomping ground after a 15-year run as the head coach at Mesa’s Desert Ridge High School. At Desert Ridge, Hathcock coached a previously moribund program to 11 consecutive winning seasons and two 6A state title berths, utilizing the same small-town football philosophy that had been engrained in him during his playing career. Now, as he prepares to spearhead the resurgence of Blue Ridge’s program, he will lean on the same values that made his teams at the 6A level so successful.

Hathcock’s return to Blue Ridge might have seemed like an inevitability given his strong ties to the school, but the idea of coaching the Yellow Jackets was one he only began to entertain fairly recently. Ultimately, it was a combination of factors that drew him back to his roots, not least of which was the opportunity to coach in an authentic high school environment away from the bright lights and scorching temperatures of the Valley.

“At first I didn’t entertain [the idea of coming back],” he said. “But I’m like ‘I’m tired of coaching in the heat,’ that’s a definite thing. I’m ready to work with small-town kids that have grown up here since they were in kindergarten, and [football] means everything to them. [The Valley] just became too much of a cesspool, a recruiting ground, and I felt like I was coaching club football. I wanted to coach high school football again and the small towns are really the last place in the state where you can do that.”

While some aspects of 6A football might have worn thin on Hathcock, coaching at a larger school provided him with certain luxuries that will not be available at Blue Ridge. The absence of a large roster and full scout team means that he will need to maximize the performance of the players he has at his disposal, but the challenge of adjusting to this new reality is one that Hathcock relishes.

On top of the limitations brought on by having fewer personnel, Hathcock will inherit a roster with a considerable amount of inexperience at skill positions. The Yellow Jackets lost their passing, rushing and receiving yards leaders from 2020 to graduation, meaning that younger players will need to step up and make up for the lost production. Further complicating matters is the fact that Blue Ridge will be running a new offense, meaning that veteran players and even some of the coaching staff will need to be re-educated.

“We returned four or five of our starting linemen and most of our starting linebackers but every single one of our skill kids is brand-new,” he said. “The challenges go deep because the coaching staff that we inherited here… they’re used to running a certain style, so I not only have to coach my players, I have to coach my coaches. That was the first dilemma that we came to, but now that our coaches are coming on board, our players aren’t coming to me for all the answers and [they’re] starting to coach other players.”

Although Hathcock’s short tenure as the Yellow Jackets’ head coach has brought a few noticeable changes to the program, one thing that he aims to hold constant is Blue Ridge’s tradition of being a hard-nosed team with a strong work ethic. He says that the school’s commitment to preserving its “bloodline,” in other words, the identity that enabled it to have so much sustained success in the past, is the key to engineering further success in the future.

His return to Blue Ridge carries with it great expectations, but at this time Hathcock is more focused on laying the groundwork for a perennially successful team rather than obtaining immediate results. While he and the team have relatively modest ambitions for this season, Hathcock admits that the desire to carry on Blue Ridge’s championship legacy is still very much present.

Claudia Collins ·
@ClaudiafCollins
Arizona and ASU next moves: Notre Dame and certain TV markets should be in the mix - https://t.co/x7Udn8KKtT via @sports360az
View on Twitter
0
2

Jordan Spurgeon Retweeted · Brad Cesmat
@bradcesmat
Arizona and ASU next moves: Notre Dame and certain TV markets should be in the mix - https://t.co/dgElVYurPZ via @sports360az
View on Twitter
4
0

Sports360AZ Retweeted · Brad Cesmat
@bradcesmat
Arizona and ASU next moves: Notre Dame and certain TV markets should be in the mix - https://t.co/dgElVYurPZ via @sports360az
View on Twitter
4
0

Brad Cesmat ·
@bradcesmat
Arizona and ASU next moves: Notre Dame and certain TV markets should be in the mix - https://t.co/dgElVYurPZ via @sports360az
View on Twitter
4
7