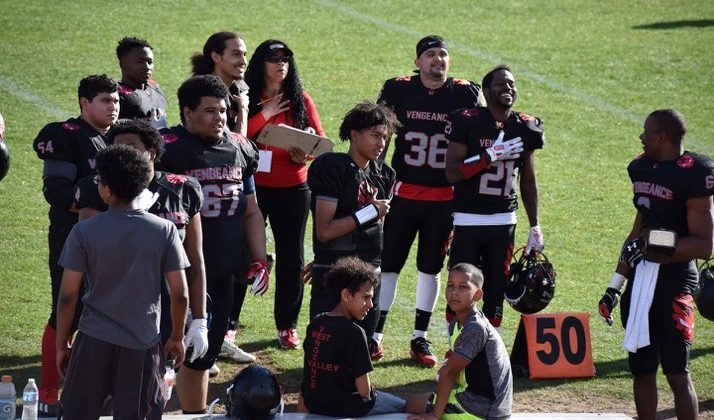 Amber Dirks has gone from worldwide billboard recording artist to blazing trails and making history. Dirks is set to break cultural barriers in her new position as the running backs coach for the Papago Pumas Junior College Football Program.

Dirks’ hiring is ground breaking for colleges all across the nation due to the mainly male-dominated career field, but she says she is ready for it.

“I’m going to bring the very professional aspects of this game because I’m here to groom them to be prepared for the next level,” Coach Dirks said. “I’m emphasizing on the academic side because not everyone is going to make it to the NFL. We need to make sure academically we have things to fall back on. They are going to get a coach out of me but also they are going to get someone that will make them better.”

Dirks has over 20 years of coaching experience through youth, high school, semi-pro, and professional indoor footbal, including 33 seasons of year-round youth football. Dirks is now part of a very small percentage of women that hold full-time coaching positions in the NCAA and NJCAA, but the rarity of this hire doesn’t stop there.

Before Dirks became a coach, she toured the world by means of a professional singing career. Dirks, raised in New York City, came west to seek out her dreams of being a famous music artist and found a career in the studios of Los Angeles and Phoenix.

Amber has provided backing vocals for groups like Sister Sledge and shared the stage with recording artists like Gladys Knight and Destiny’s Child. After playing and singing in front of tens of thousands of people across the world, Dirks traded her microphone for a whistle to take on coaching. It all started with her son at five years old wanting to play football.

@PapagoPumas would like to announce our 1️⃣st woman position Coach in Junior College Football History, our RB ‘s Coach, @Coach_Dirks brings over 20 yrs of coaching experience from various levels. We our excited & blessed to have her be a part of our Puma Family. #HistoryIsMade pic.twitter.com/bS352ilQqh

“I was doing a lot of touring with a very well-known group and he (Amari Dirks) was very interested in playing football. I was kind of hesitant because I didn’t know much about the game but we put him onto a team and it was not a good experience,” Coach Dirks said. “I say that as a parent sitting on the sidelines watching how derogatory these coaches were and these kids at this age are very impressionable. This is supposed to be a stepping stone or building blocks for them. I looked at my husband and told him one of us is going to have to step up because he wants to play. So I said I am going to do it and I learned the game.”

“I bought all the books, I got online to do clinics, and did everything I could to learn the game. There were times that I’d be the only female with 350 male coaches but that is how I became so passionate about this,” Dirks explained.

Dirks spent time at Apollo High School, serving as the JV head coach while also spending time at Arcadia and North Canyon High School as a tennis coach. The road to coaching at Papago had its own fair share of obstacles for her due to her status as a female
coach amongst male coaches.

That’s a wrap from Apollo! The Hawks have a whole new coaching staff which includes Amber Dirks. She will be the JV head coach and also assist with the varsity D on Friday nights. pic.twitter.com/77ASEVzEWA

“As a female they didn’t take me seriously in the beginning,” Dirks said. “There was a point where referees would walk past me and not even acknowledge me, only go to my coaches who were men asking to speak to the head coach. Soon to be pointed back around to me, the head coach. But slowly, I gained the respect and wasn’t taken as a joke. I love this sport.”

Among the players who have played under Dirks are 2021 WR Elijah Sanders from Ironwood and SDSU commit William Haskell.

“The biggest reward for me is to watch these elite student athletes honing into what they really dream and aspire to being successful not just on the field but off the field as well,” Dirks explained. Dirks continues to work on her passion of music with just recently releasing a song on the international charts. But Dirks is fully committed to the game that has changed her life not just her career.

“Coaching has so far surpassed my singing aspirations because I have grown to be so passionate about this game that I consider myself a coach more than a singer,” Dirks explained.

Dirks will lead a running backs room that includes 3 rd team All-American running back Brian Santana-Fis going into next season. The Pumas are finishing up summer camp with an upcoming schedule soon to be released.