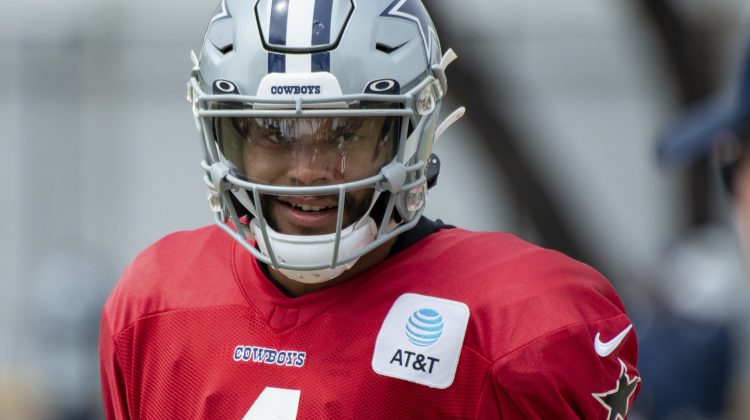 The Cardinals will open their 2021 preseason schedule at home against the Dallas Cowboys Friday night, and the status of Dak Prescott remains very much up in the air as the Cowboys quarterback recovers from a shoulder strain.

To preview the contest and shed some light on Prescott’s situation, former ASU quarterback and longtime Cowboy Danny White appeared on The Brad Cesmat Show, where the College Football Hall of Famer speculated that Prescott would play only sparingly against the Cardinals, if at all.

“He may not even dress out,” White said. “There’s no way that Dak will play. [He’ll play] maybe a quarter in the third game and may not even play next week. We’ll see, but I don’t expect him to play at all [Friday] night. If so, it’ll be one series.”

White went on to lament the Cowboys’ overall lack of toughness, noting the many injuries he suffered during his own playing career and stated that Prescott would need to “toughen up” in order to fully live up to his expensive contract.

“These guys are so pampered today,” White said. “Dak’s got a sore shoulder. Do you know how many camps I went through without a sore shoulder or a sore elbow? Zero. It was just part of camp. Now that he’s this $40 million a year player, an asset to Jerry (Jones) and the organization, how is that going to affect him on the field? If you’re not tough enough, and I think Dak is, I’m not saying he isn’t, the game will get you.”

While he did not seem impressed with the team’s level of toughness, White praised the Cowboys’ offensive weapons and stressed Prescott’s importance to the franchise.

“Dak might be the most valuable player to his team [out of] any player in the NFL,” White said. “If Dak is out, the Cowboys might not win a game. If he’s healthy, they might not lose a game. That’s how valuable he is to this team. I’ve said it for the last four years at least, this is the most talented roster, on paper, that I’ve ever seen from the Dallas Cowboys.”

If White’s prediction holds true and Prescott does not suit up for Friday’s game, fans can expect to see a lot of Garrett Gilbert and Cooper Rush under center for the Cowboys. Even if Prescott does not end up playing, Dallas ought to be a good litmus test for the Cardinals as they take the field for the first time in 2021. Will the Cowboys’ high-powered offense be too much for the Cardinals to handle, or will Arizona’s new acquisitions prove to be the difference?

All will be revealed come kickoff.