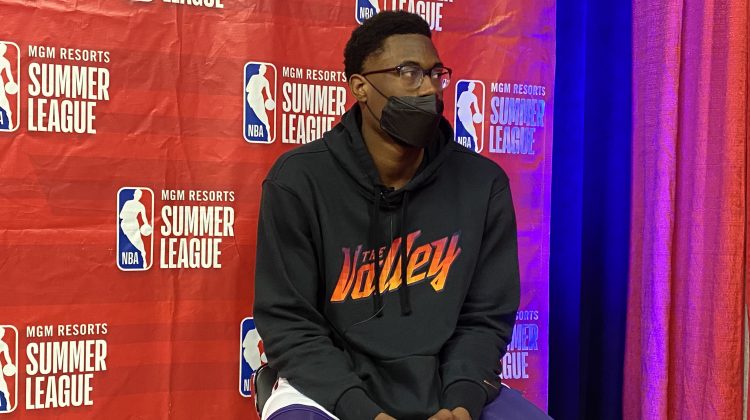 The Suns are already playing basketball again. Well sort of.

The ones who played a majority of the minutes during the Finals are in Las Vegas supporting their younger teammates from the stands.

“We all have a bond. We call each other brothers for a reason… It’s fantastic to have those teammates come out here and support us.” 🧡💜 pic.twitter.com/0WiKjp63Ds

“I wasn’t expecting to see a lot of veteran players,” ESPN’s Cassidy Hubbarth said on The Brad Cesmat Show. “To have opening night and then I turn around and see Chris Paul there, that’s awesome of course he’s a leader… And then in the first quarter I do a gasp I was like ‘Devin Booker!’ I’m telling my producer that Devin Booker is here…. To see Booker there knowing he came straight from Tokyo, I just found that so impressive and indicative of what a close unit this Suns team is.”

After that first game Jalen Smith, the No. 10 pick for the Suns in the 2020 draft, said it meant a lot to him that they were there for him.

After not playing much last season, Smith is eager to showcase his development. While there’s rumors about trading him for a veteran power forward, there’s something to be said for how he’s managing his expectations as a lottery pick.

“You can tell that he’s itching to play,” Hubbarth said. “He looked like the best player on the floor at moments against the Lakers. There were times where you wanted to see him more involved in the offense a bit down the stretch because he was the best player. He was high energy.”

A fastbreak slam followed by a 4-point play 🔥

Many view this past season as a wash for Smith. Hubbarth echoes that sentiment, saying this is basically his rookie year. While the roster is built to win now, there’s reason to believe they will continue to stay patient with his development.

With the signing of veteran center Javale McGee, there’s less pressure to play him this season. However, Hubbarth believes he will still have a vital role to play.

“Right now you allow him to gain confidence, you allow him to figure out how he can be the best in his role,” Hubbarth said. “It is a stacked Suns team. For him, he is going to have to carve out his space. In order to find out where he gets in, he needs to find confidence in his game.”