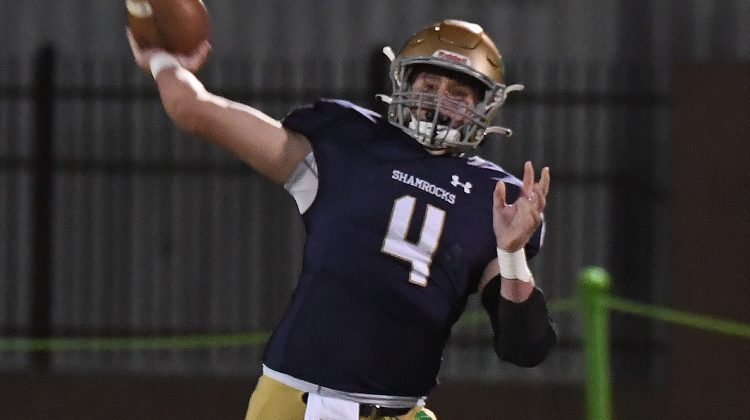 It is rare to see an underclassman quarterback lead his state in every major passing category as a first-year starter. It is even more rare for a quarterback to receive no college offers after doing so.

Welcome to the world of Yuma Catholic’s Richard Stallworth. As a sophomore in 2020, Stallworth exploded for 49 touchdowns and 3803 yards through the air, leading the Shamrocks to an undefeated regular season record and earning them a trip to the 3A state championship game. He was one of only two quarterbacks in the state to eclipse the 3000-yard mark, and his 133.1 passer rating was also the best in Arizona among qualified starters.

Incredibly, not one college program offered Stallworth a scholarship following his exceptional sophomore campaign. His youth and Yuma’s remote location likely played a role in keeping him off of college coaches’ radars, but his performance on the field certainly did not.

Richard Stallworth makes a perfect throw down the right sideline to hand Yuma the quick lead.

“We’re waiting on that first offer,” Richard’s father and Yuma Catholic head coach Rhett Stallworth said. “Down here in Yuma, it’s hard to get people to pay attention. We’re hoping to do it the old school way where it’s just lots of film, getting the film out and people look at it and say ‘he’s a player’ and go from there.”

As impressive as his debut season was, Stallworth’s second act might end up being even more spectacular. With a year’s worth of in-game action and a full offseason under his belt, the possibilities for Stallworth and Yuma Catholic are virtually limitless. There will be pressure on him to follow up his coming-out party with another extraordinary statistical season, but Richard says that the idea of winning a championship and making his family proud is the only motivation he needs.

“It helped a little bit seeing (former Gilbert Mesquite quarterback) Ty Thompson’s name up there and me and him going back and forth, but I wasn’t that worried about what was going on the stat sheet,” he said. “My goal in these next two years that I have is to win a state title with my dad and my little brother.”

Yuma Catholic leads Pusch Ridge 17-6 with 3:53 left in the first half. pic.twitter.com/gQ8xLnTtJK

If not for an injury suffered in the first quarter of the state title game against Snowflake High School, Stallworth might already have a championship to his name. Nonetheless, Richard and his father both agree that the experience of having played on the big stage will pay off in a big way this fall.

“I definitely think it will help,” Rhett Stallworth said. “We used to talk about it before we’d ever done it and played for a state title. [You have to] act like you’ve been there before, and that’s hard to do. When you have been there before, you approach it differently, more mature and you know how to handle it.”

Richard’s appearance in the state championship game may have been cut short, but he saw more than the necessary amount of playoff reps in the two games prior, in which he easily dismantled Bourgade Catholic and Pusch Ridge, and those two games should be all the experience he needs to lead the Shamrocks on another deep playoff run.

Richard Stallworth with a DIME but it’s called back due to holding pic.twitter.com/IQXgVJ9J1F

Fully recovered from his injury, Stallworth has spent the offseason competing in passing tournaments with his teammates and working on improving his mobility, which he hopes will add another component to the Shamrocks’ already lethal offense.

“Being able to go out there and do everything we need to do is really great,” he said. “I’ve been working on getting a lot faster than I was last season so that I’m not just a threat throwing the ball. I want to be able to run the ball when we need to and that’s what I’ve been working on.”

To say that he made no impact in the run game last season would be an exaggeration, as his five touchdowns on the ground were the second-most on the team, but a true dual-threat version of Richard Stallworth would be nightmare material for any opposing squad. Yuma Catholic’s attack will be further aided by the return of their leading rusher and top three receivers from their run to the state title game, which will allow Stallworth to build on the chemistry he has already developed with his skill players.

Replicating his dominant 2020 performance will be no easy task, but all the pieces are in place for Stallworth to become an unstoppable force of nature in 3A. His high school training wheels, if he ever needed them, have long since been removed, and his tantalizingly close brush with a state championship has added another layer to his competitive flare. Playing in Yuma has likely prevented Stallworth from receiving his full dues, but if he can maintain his current level of play, the best-kept secret in Arizona high school football will not be a secret for much longer.