The Phoenix Suns’ big three did not have a particularly hot start in Game 2 of the NBA Finals. The Bucks, coming off a Game 1 loss that felt like cruise control for Phoenix, came out swinging and adjusted their defensive sets.

Devin Booker started the game shooting 2/10. In the first quarter, Chris Paul had just as many turnovers – two – as he did points. Deandre Ayton didn’t show up in the box score until nine minutes into the game. But the Suns escaped the opening quarter trailing 29-26.

To help weather that storm, Cameron Johnson, Jae Crowder, Mikal Bridges and Torrey Craig combined for eight 3-pointers. Booker’s only two makes were 3-pointers as well. The Suns made only one shot inside in the arc in the opening quarter.

The Suns eventually found their rhythm, outscoring the Bucks 30-16 in the second quarter and did not give up the lead again, winning 118-108 to take a 2-0 lead in the NBA Finals. The Bucks won the battle for points in the paint, second chance points, fast break points and bench points.

The significance isn’t necessarily the quantity of those numbers. It’s when those shots were made. That production absorbed the Bucks’ first punch and gave those three time to get in rhythm and not look back.

“I liked the fact that our guys just stayed the course and showed poise,” head coach Monty Williams said. “We were down three and then in the second quarter, which I felt like won the game for us our defense was at a high, high level. We held those guys to 16 points. So, that ended up being the difference. Obviously, you have to do more in the second half, but the second quarter defense was tremendous.”

The Bucks made runs to close the gap, but the Suns had answers. Booker ended with 31 points on 12/25 shooting. Seven of those makes came from beyond the arc. In total, the Suns shot 20/40 from 3-point land.

“I just slowed it down a bit,” Booker said. “Early in the game just amped, excited and shooting a few things long, rushing a few shots. So just getting back to fundamentals.”

Bridges followed up his 14-point performance in Game 1 with 27 points and seven rebounds in Game 2. The Suns only got to the line 14 times on Thursday with Bridges accounting for eight of those, making all of them.

“He recognized once he started making shots and they ran him off the line, he was getting to his spot,” Williams said. “Sometimes he would get close to the basket but he would get to a spot where he can make that seven, eight-foot jump shot. He’s been doing that all year, it’s just that everybody’s seeing it now.”

Now, the Suns head to Milwaukee for two games with a 2-0 lead. They’ve clinched their three previous postseason matchups on the road, but the team is not getting ahead of themselves.

“We talked about it being a 0-0 series. That’s our mentality. That’s what we talked about this morning. We have to approach every game with a level of desperation and we can’t look at the series numbers. But human nature forces you to do that, but our mentality is to play every game as if we’re coming off of a loss. I think that’s served us well throughout the playoffs. And we know that when we don’t play with the force that is necessary to win, we’re not as good as we can be.”

Game 3 tips off in Milwaukee on Sunday at 5 p.m. 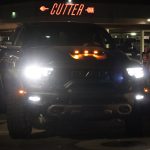 Phoenix Is A Suns Town, Last Night Showed It 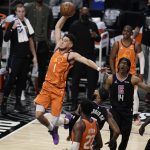