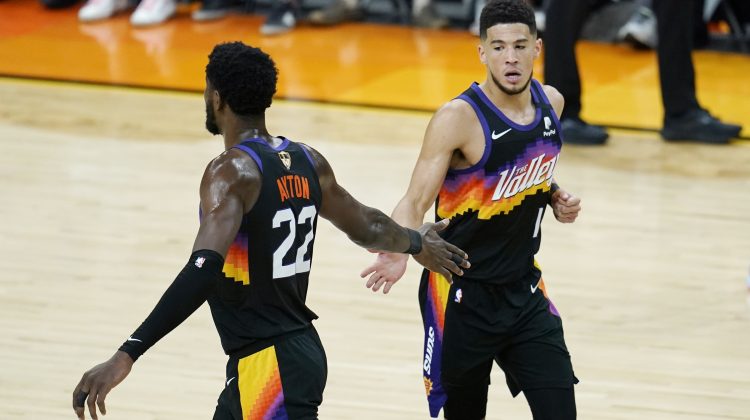 The magic number is three. This is unchartered territory for the Phoenix Suns.

Every synonym for “unexpected” has been used in the past few weeks to describe the Phoenix Suns’ run to the NBA Finals. To them, this was the opposite. This is what is expected within that locker room and the organization.

“Our team is built a little different,” Chris Paul said. “Everyone is comfortable and accepts their roles. This is a special team and we’re right where we’ve worked to be.”

Game 1 was all Suns. Now there’s a few key areas and storylines that are being discussed heading into Game 2 tomorrow night.

It was announced by the team today that Dario Saric suffered a torn ACL in Game 1 and will miss the remainder of the season. This was a blow felt right away by Monty Williams.

“It’s one of those situations that literally breaks your heart,” Williams said about Saric’s ACL injury. “He was so looking forward to playing in these NBA finals. It was a tough thing to hear this morning… obviously he was shocked and he felt pretty bad.”

Injuries in the Finals can be devastating to a team’s mindset.

As far as the rotation is concerned, Saric mostly spelled Deandre Ayton when he needed rest. Against a bigger team like the Bucks, this could present obstacles. However, Williams says that he’s comfortable running Torrey Craig and Abdel Nader at the five whenever Ayton is on the bench. He also mentioned that Frank Kaminsky will see a few more minutes on the court after not playing much this postseason.

Game 1 was a maestro performance from Paul, Ayton, and Devin Booker who combined for 81 points. Much of that success came from exploiting Brook Lopez in the screen and roll game. He seemed to switch every time and that’s a matchup Williams’ wants his team to take advantage of.

“There’s only so many things that you can do out here on this court,” Paul said. “We just adjust. If they’re gonna trap, they trap. If they’re gonna switch, they switch. Whatever it may be, all season long we’ve adjusted to anything teams have thrown at us.”

The Bucks found some success when its rotation went small. With Giannis Antetokounmpo at the five and four guards on the floor, Milwaukee cut the lead from 17 to seven in the fourth quarter, before the Suns pulled away late. In order to combat any potential setbacks in Game 2, Williams is preaching what he always does: play with urgency.

“We’re preparing ourself for the best Milwaukee effort we’re going to see in this series,” Williams said. “Our guys don’t need to be pushed too much, they know they need to play with urgency.”

The leader of the Suns is CP3. His experience plays a large role in how this team operates on a day-to-day basis. Despite the fact that he’s 36-years-old, Paul knows he’s in the best position of his career to win a title while playing at a high level.

“I know the work that I put in day in and day out,” Paul said. “I don’t think about being 36 when I’m on the court. I’m thankful for the team around me…. You just gotta fall in love with it, the repetition of it.”

In Game 6 of the WCF and Game 1 yesterday, Paul has scored over 70 points. A 16-year wait is paying off for Paul and he’s ready for this moment. He even believes that he wouldn’t have been this ready to perform if he made it this far when he was younger.

As a side note on Paul, he’s been wearing HBCU clothes on a regular basis for years. Today he’s rocking a Winston-Salem State University hoodie because he’s taking classes there. He’s looking to get a communications degree, so be on the lookout for television CP3 in a few years.

"It's not coincidental… just trying to champion them the best way I can."@CP3 on why it's important that he promotes HBCU's #NBAFinals pic.twitter.com/KRkiAkjqk3

Not only is Booker dominating on the court and winning the NBA Cares Community Assist award, but he’s wearing outfits that showcase the history of Suns playoff runs.

“I’m just paying my dues honestly,” Booker said about his latest wardrobe. “This is a basketball town. These fans put in the work for the arena to be as loud as it was last night. I appreciate everybody on this shirt for making this organization what it is.”

"I'm just paying my dues, honestly. I appreciate everybody on this shirt for making this organization what it is." pic.twitter.com/ab0Wqgvzl3

The veteran leadership of this team with Paul and Jae Crowder is noteworthy. Young players like Cam Johnson and Cam Payne are reaping the benefits, which were actually sowed by players like Ricky Rubio last year during the bubble.

“They’re real learners,” Williams said about the young players on the team. “It takes guys awhile until they know what to say in practices. Chris and Jae allow those guys to talk and express themselves and they’re better off for it.”

Speaking of growth, Williams acknowledges he’s grown tremdously over the past decade. Early on in his coaching career he was known as a tough coach. Now he feels he’s more considerate when getting his message across to his players.

“I was more of a doofus then than I am now,” Williams said while laughing. “But still a doofus now. I just want to be there for all my guys and prepare them to win games.”

Part of Williams’ philosophy is embedded into the DNA of this team. Much like the rest of the valley, this team enjoys having a great time after series wins. Some don’t like the celebrating, but this team doesn’t care. They know who they are and it stems from trust built throughout the year.

“You have to build that trust in losses, wins, and on bus rides and plane rides,” Paul said. “We come to work but at the same time we make sure we have fun and enjoy being around each other.”

Game 2 is tomorrow night at 6 p.m. on ABC. The Suns are looking to take a 2-0 lead and move closer to the franchises’ first NBA Championship.