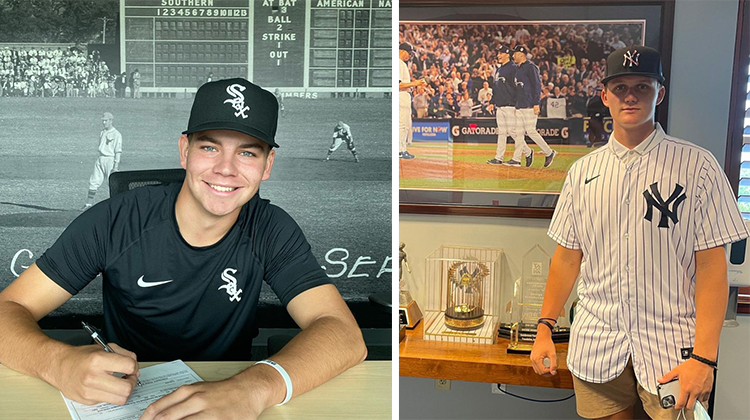 It wasn’t a question of whether or not they would be drafted, but more where they would end up. Desert Mountain’s Wes Kath and Hamilton’s Brock Selvidge were both top high school prospects coming out of Arizona.

In his senior year, Kath won the 2020-21 Arizona Gatorade Player of the Year award. Selvidge pitched to
2.41 ERA in 11 appearances this past season. Kath was drafted in the second round, 53rd overall by the Chicago White Sox. while Selvidge was picked in the third round, 92nd overall by the New York Yankees.

“[The two days before the draft] was the longest two days of my life,” Kath said. “So, it was those last couple days that were pretty stressful, but I kind of wanted to enjoy the moment. I was just trying to soak it in and appreciate the little things with it.”

In some mock drafts, Kath was projected to be picked late in the first round, but with some unexpected selections, he ended up finding a home with the White Sox.

“In the moment, I was definitely a little bit disappointed but as the next day went on, I knew kind of where I was going to go,” he said. “I knew the White Sox really liked me. So then from that point it was just sit back and relax and wait for the pick to happen.”

Selvidge was on track to be a third or fourth round pick, something Hamilton head coach Mike Woods knew early on.

“He was kind of a slam dunk as far as how high he goes,” Woods said. “Some kids you have to wait for their body to develop, he was already there and then he just kept going and kept growing. So, we knew early on that this was probably going to be his future.”

For Selvidge, being drafted by the Yankees meant everything to him. “It was a dream come true,” Selvidge said. “I definitely feel as it is the best moment of my life and I’m down here living out my dream.”

Kath, who was committed to play at Arizona State and Selvidge, committed to Louisiana State, both had a decision to make -either head to college or sign a professional baseball contract. In the end, both decided to forgo their commitments and sign with the team that drafted them.

According to MLB.com’s Jim Callis, Selvidge signed for $1.5 million with the Yankees, which is more than $800,000 over the pick value.

Kath also took home significantly more money than was expected, signing for $550,000 over the typical slot value for pick No. 53 in the draft.

Desert Mountain baseball head coach Ryan Dyer, who has known Kath since he was in middle school, believes he will be one of the best players to come from the program.

“It will be the highest pick that we’ve had through the program,” Dyer said. “There’s been a lot of players though the years that have gone on to good levels in college baseball and Merrill Kelly’s at the Diamondbacks now. Wes is just I think anchoring himself as one of the best that have come out of Desert Mountain.”

Selvidge is the highest pick to come out of Hamilton since 2017 when Dominic Hamel was drafted by the New York Mets 81 st overall. Hamilton has seen five players since 2012 selected in the first three rounds of the MLB Draft. Just days after being drafted, he’s already in Tampa getting started with the Yankees.

“I walk in every day to the weight room and on the field and it’s just a surreal moment to be wearing a Yankees shirt or Yankees sweatshirt,” Selvidge said. “Just to see that I’m in an organization with the history that it does contain, it’s a lifelong experience that nobody’s ever going to get.”

Both Kath and Selvidge won state championships during their time in Arizona. Most recently, Kath and Desert Mountain were crowned 5A state champions in 2021. It was an experience he’ll never forget.

“Going into the day I was so nervous,” he said. “I wanted to win so bad. I remember having a tough time trying to eat and stuff like that… It’s always fun to bring something back to the school and the community like that especially when you have a lot of people rooting for you.”

As a sophomore, Selvidge and Hamilton brought home the 6A state title in 2019 which included a three-run blast from Selvidge that broke open the game.

“My favorite moment would be hitting the home run in the state championship of my sophomore year when we won it,” he said.

Now, the two will head to the minor leagues where they hope to make the same impact as they did in high school.