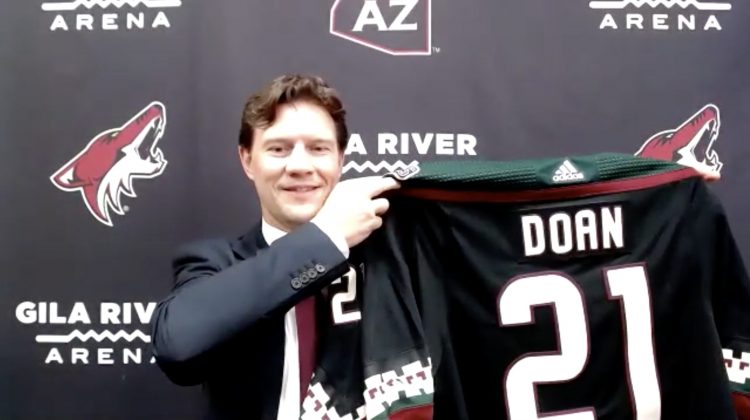 The 2021 NHL Entry Draft has come and gone, and few teams were able to get more value out of their picks than the Coyotes.

Thanks to a series of trades made by General Manager Bill Armstrong, Arizona was able to increase its number of selections from six to nine, maximizing its chances of finding impact players in a wildly unpredictable draft.

Rather than focusing on a singular position of need, the Coyotes opted for a balanced approach to the draft, using their first three picks on forwards before shifting their attention to defense and goaltending in the later rounds. Here are the players they selected.

With the first-round pick they acquired from Vancouver in the Oliver Ekman-Larsson/Conor Garland trade, the Coyotes selected Guenther, a highly-regarded winger from the Western Hockey League’s Edmonton Oil Kings. Guenther might be the best pure goal scorer in the draft, and was ranked as the third-best prospect overall by TSN’s Bob McKenzie. A run on centers and defensemen in the top ten led to Guenther sliding to the ninth overall pick, where Arizona was happy to select him. He likely won’t be in their lineup until at least 2022, but Guenther should provide an immediate solution to the Coyotes’ goal-scoring issues once he reaches the NHL.

ICYMI: The 5th ranked North American skater for the #NHLDraft, Dylan Guenther of the @EdmOilKings, compares his game to that of Claude Giroux.#MeetTheFuture | @KubotaCanadaLtd pic.twitter.com/caI9auNFsx

With their first pick of day two, the Coyotes drafted a true home-grown talent in Josh Doan. The son of longtime Coyotes captain Shane Doan, Josh played his minor hockey for the junior Coyotes and is committed to play at ASU this coming season. If not for his overage status and concerns about his skating, Doan likely would have gone in the first round. He already has NHL size, excellent hockey instincts and above average puck skills, all of which make him a projectable middle-six forward at the next level. Like Guenther, Doan won’t be in the Coyotes’ lineup for at least a couple of seasons, but his versatility and upside give him an excellent chance to stick once he gets there.

He's a HUGE fan of these shots from the wing. And he's really, really starting to master them. This shot has perfect fundamentals, perfect weight transfer, and a great release.

And, of course, he sniped. Wow. #2021NHLDraft pic.twitter.com/I2gujDERnR

The last of the three forwards selected by Arizona in the first two rounds, Fedotov was a star in Russia’s top junior league this past season. Like Guenther, he is a natural goal scorer with a history of success in every league he has played in, though his lack of appearances in international tournaments may have caused him to slip in the draft. As with most Russian-trained players, Fedotov’s level of NHL success will depend his ability to adapt to the smaller North American ice surface, but he has the size and scoring instincts necessary to do so.

Ilya Fedotov (2021) scores a between the legs goal against Snaipery in MHL action #2021NHLDraft pic.twitter.com/JXn7uqtBzz

Moser, a 21 year-old Swiss defenseman, is perhaps the most intriguing of the Coyotes’ eight draft picks. He is coming off of a monster season in Switzerland’s top league, where he was the captain of his team. Moser’s style of play has drawn comparisons to 2020 Norris Trophy Winner (NHL defenseman of the year) Roman Josi, and his ability to produce against older players indicates that he should at least be a third-pairing defenseman in the NHL.

🚨! And just like that it is 2-0 in Klagenfurt! Janis Moser gives @ehcbiel the 2 goal lead!#ChampionsGoBeyond pic.twitter.com/LuLmLlKsfw

Another European overage defenseman, Martinsen Lilleberg spent the 2020-21 season in Norway’s top league and also appeared for his country at this year’s World Championships, posting modest totals. at 6’2″ and 207 pounds, he has the frame of a prototypical NHL defenseman, but likely needs more time to develop before coming to North America. He is signed on to play in Sweden’s top league for at least the next two years, and his performance there will likely determine whether he plays in the NHL or not. Due to limitations on in-person scouting, this year’s prospect pool is shrouded in mystery, and there are sure to be diamonds in the rough. Martinsen Lilleberg could be one of them.

Every year, there are talented goaltenders who fall to the later rounds of the draft only to develop into stars later on in their careers. The Coyotes are hoping this becomes the case with Korhonen, a 6’5″ Finnish netminder who appeared in two games for Pori of the Finnish League last season. Finland has been a factory for franchise goalies in recent years, and it is possible that Korhonen becomes the next one, though it is far too early to know for sure. On average, goaltenders take longer to develop than skaters, so it is unlikely that the 18 year-old Finn plays for the Coyotes any time soon.

Landry, an American-born center of French-Canadian origin, is another very intriguing prospect. He is fast, hard-working, effective in all three zones, and was the captain of his junior team. While he is slightly undersized for a center and doesn’t have elite offensive skills, Landry has all the trademarks of a late-round steal. In the fifth round of the 2015 draft, the Coyotes selected Conor Garland, another undersized forward from the QMJHL, and got more value than they could have possibly imagined from that pick. With Garland now out of the picture, Landry could be the perfect candidate to fill his spot in the lineup.

Just yet another example of why Manix Landry (#13) will be in my Top 32 at the end of the year. pic.twitter.com/6HKPt9BiPZ

A product of Minnesota high school hockey and University of Vermont commit, Thomas is a dynamic puck-moving defenseman with limited junior hockey experience, playing in nine games for the USHL’s Sioux Falls Stampede last season before returning to high school. While he was an offensively productive player in high school, Thomas seems like a project and a long shot to make the NHL at this time. His performance in college will provide much more insight into his NHL potential.

It seems as though the Coyotes had eyes on Lipkin, as they acquired this pick from Montreal late on day two. Lipkin, a 6’3″ winger, played with Josh Doan on the Chicago Steel this past season and is committed to play for Quinnipiac University in Connecticut. While his 11 points in 30 games with the Steel don’t hint at a ton of offensive potential, Lipkin could have a future as a checking forward in the NHL.

None of the Arizona’s 2021 draftees are likely to play in the NHL right away, but the Coyotes managed to walk away from what many pundits considered to be a subpar draft with a number of promising players. A successful showing at the draft table was vitally important as the team attempts to reinvent itself under new head coach André Tourigny, and while it is too early to know for sure, the Coyotes appear to have done well for themselves given the circumstances.

In a draft where he initially had a single pick in the first three rounds, GM Bill Armstrong managed to trade back into the top ten and acquire two extra second-rounders without giving up key assets. If even one of the players drafted with those picks makes an impact, Armstrong’s first draft in Arizona will be an unqualified success.