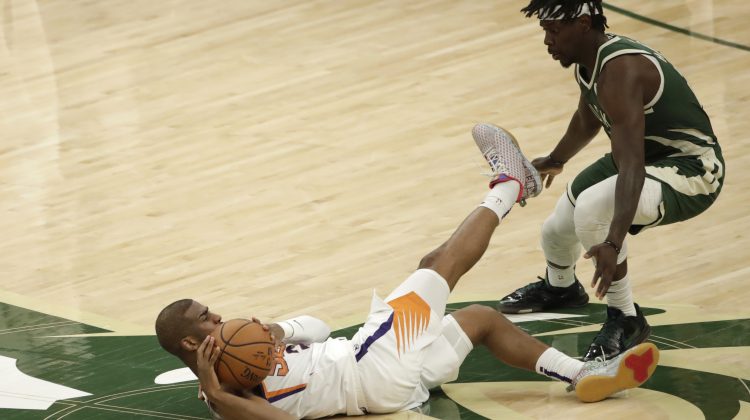 It’s a new series in the NBA Finals. After both teams took care of business on their home floors, the Finals return to Phoenix for Game 5.

In Game 4, the story for the Suns was the struggles of Chris Paul. Despite those struggles and maybe some fatigue, the Bucks aren’t ready to believe he’s done. Starting point guard Jrue Holiday knows how taxing it is on Paul and himself press for all 94 feet down the floor.

“It’s gonna be a battle,” Holiday said. “I think both sides know the price and both have a goal so you just have to leave it out there.”

The adjustment that Holiday and others have made well since games one and two, is defending the screen. In those first two matchups, Paul was able to expose Bucks’ center Brook Lopez and get switches with ease. Now, the third-team all defensive member is playing his game and sticking with Paul for longer, allowing their defense to stay better set in the paint.

“No secrets,” Holiday said. “I’m just trying to make it uncomfortable for him [Paul]. Sometimes going over the top, sometimes going under. We know he has a side-step three that’s very effective. He always has the mid-range, which he rarely misses. Every time he misses, you’re like surprised that he missed.”

Suns fans always feel surprise when Paul misses his mid range jumpers, which he did a lot of in his 10 point, 5-13 shooting performance in Game 4. Since Holiday began defending Paul more, turnovers have also become a problem.

He was guarded by Jrue Holiday in the last two games. pic.twitter.com/Fz80j0Sqjx

With Game 5 at home, Paul and the Suns look to retake control of this series. Tip off is set for 6 p.m. PST at Phoenix- I mean at Footprint Center.