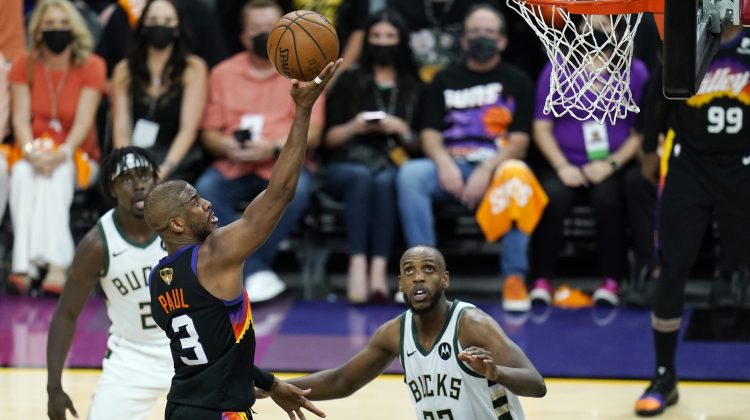 Feel free to call it a new series. The first four games to begin the 2021 NBA Finals have brought four completely different outcomes and showcases. As the series returns to Phoenix on Saturday night, all eyes are on the Suns as they attempt to control their home court advantage.

No team has lost at home through four games. While the average margin of victory in this series is 12 points per game, the Suns have scored 439 total points and the Bucks total 442 points in the series. The outcomes haven’t been tight but the series sure seems to be.

Needless to say, the Suns didn’t perform at a championship-caliber level in Games 3 and 4. The Bucks are on a roll following back-to-back victories to tie up the Finals and aim to bring that momentum back to Phoenix for Game 5. The home team has won every game thus far in the series and Las Vegas believes that trend will continue.

Instead of a chance to clinch their first NBA Championship at home, the Suns return to Phoenix with an even series and loss of momentum. The Suns’ 20-point loss in Game 3 and six-point loss in Game 4 brings them to 13-7 against the spread this postseason. Phoenix is still a respectable 55-36-1 against the spread over the course of the season and is 26-20 when at least a 4.0-point favorite.

Not a pretty game. Now it becomes best 2-of-3 w/ 2 games in Phoenix #RallyTheValley

In the regular season, this duo combined for 249 points in regulation in their first meeting and 255 in overtime in their second game. It certainly shouldn’t be an expectation for this matchup to meet either of those marks without an overtime finish in these NBA Finals.

Games 1 and 2 in Phoenix hit the over. Games 3 and 4 in Milwaukee hit the under. At this point, 218.0 total points turns into a craps shoot for the Game 5 over/under. Phoenix did a decent job minimizing Giannis Antetokounmpo’s scoring in Game 4 after back-to-back 40-point games but still couldn’t find a foothold in their own scoring ability.

Can Chris Paul meaningfully bounce back? Will Devin Booker blow up for another 40-point night? Can Giannis soar for another massive scoring game? Will P.J. Tucker or Mikal Bridges make a monumental difference on defense? Who else will step up and be a lead scorer? These are all questions you’ll ask yourself when deciding the Game 5 over/under.

From now on, the Phoenix Suns will be playing their home games at the Footprint Center. @EvanOscherwitz has the details on the Suns’ naming rights partnership with @planetfootprint and their plans to transform the arena.https://t.co/oJSaAAAdo3

Game 5 of the NBA Finals returns to Phoenix on Saturday, July 17. You can tune in on your local ABC channel beginning at 6:00 p.m. Arizona time.