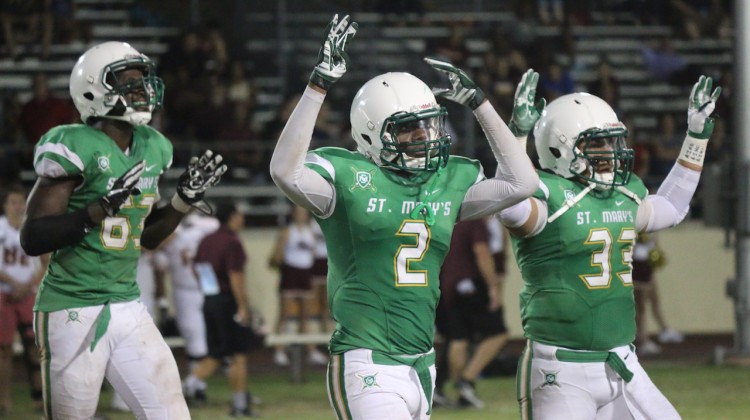 While it may not hold the same significance as Easter Sunday or Christmas, the day of the rivalry game between Saint Mary’s High School and Brophy College Prep could be considered a holy one for many Catholic high school football fans in Phoenix.

From 1959 until 2012, the annual meeting between two of the city’s largest Catholic high schools was a staple of Arizona high school football. Like any storied rivalry, the Brophy-Saint Mary’s feud is steeped in tradition, folklore and mutual, respectful dislike between the two sides. Legend has it that Saint Mary’s appropriated Brophy’s green and white colors after the latter school temporarily closed in 1935, and that this event lit the spark that would eventually ignite the rivalry.

On Sep. 3, the two schools will do battle again after a nine-year hiatus. The meeting was officially announced in April, but discussions between Saint Mary’s head coach Jose Lucero and Brophy skipper Jason Jewell had been ongoing for over a year before the AIA approved their arrangement. Lucero, the reigning 4A coach of the year, says that the teams initially did not plan to restore the rivalry, but ultimately decided to do so after their original plans fell through.

Excited to announce that THE rivalry is OFFICIALLY back!!! Mark your calendars for St. Mary’s vs Brophy game 1 of the 2021 season!!! pic.twitter.com/G7KDyI5Zdd

“We originally planned on having a scrimmage,” Lucero said. “That got a lot of traction and people were excited about it. We ended up not scrimmaging due to the COVID situation and then one day, out of the blue, I just decided ‘you know what, we should try and get it on the schedule for real.’”

Historically, the rivalry has been relatively even, with Brophy holding a slight advantage in head-to-head wins. However, at the time of the rivalry’s discontinuation, the two programs were headed in completely opposite directions. Saint Mary’s had lost 12 of the previous 14 meetings and was becoming stagnant, while Brophy was well on its way to becoming a 6A powerhouse.

The rebirth of the rivalry comes at an especially opportune time for Saint Mary’s, as the school’s athletic programs have experienced a major renaissance in the last year. The basketball program won its first state championship since 2009, while the football team enjoyed its most successful season in nearly a decade.

The upcoming season will be Lucero’s second as the Knights’ head coach, and he views the game against Brophy as a means of galvanizing the school community and establishing Saint Mary’s as a program on the come up.

“It’s always good to play against other good teams,” he said. “With a game like this, there’s multiple things that are going to help us. The school community and the school coming together and supporting the program, that’s going to be great for our kids, just to experience that part of it. We’ll get a chance to see where we’re strong at, where we’re weak at after a quality opponent like [Brophy].”

Lucero’s ties to the rivalry long predate his coaching career. An alumnus of Saint Mary’s, he made his high school football debut against Brophy and still fondly remembers the profound excitement surrounding the rivalry during its golden age.

“There’s kind of a lot that goes on,” he said. “I remember everything from the huge assemblies we would always have for Brophy week to getting a beat-up old car and spray-painting it red and everybody hitting it with a sledgehammer.”

Many years have passed since Lucero last took part in a game against Brophy, but he is still as passionate as ever when discussing this year’s installment of the rivalry. Though he will be carrying a playbook and headset instead of a helmet and pads, the thought of rekindling the intense enthusiasm that once surrounded the game has him impatiently counting down the days until kickoff.

“I’m just looking forward to having my chance to be a part of that environment again,” he said. “Since the moment this game was announced, I’ve had alumni reaching out to me. I’m looking forward to seeing a packed stadium and people really excited about the game.”

Though there is currently no concrete plan to extend the rivalry beyond this season, neither school has any intentions of making it a one-time event. Brophy and Saint Mary’s have come to realize that they, as well as Arizona high school football in general, reap considerable benefits from the rivalry’s prestige and the attention it brings.

“We definitely want to continue to play the game,” Lucero said. “Both schools recognize that this is a longtime rivalry that’s important to a lot of people, very important to both school communities. If it’s up to coach Jewell and I, it’s going to stay there for the foreseeable future.”