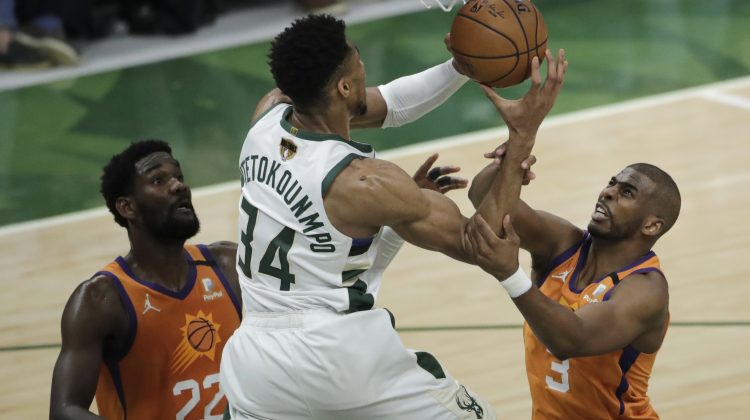 The Suns drop two straight to the Bucks following a 109-103 loss in Game 4. It’s now a best-of-three series with two more games in Phoenix.

The play of the game came by way of the Greek Freak. A pivotal block with a tie game late in the fourth.

Stress levels were high the entire game for Suns fans. It was also full of surprises.

Devin Booker is a bad, bad man. He dropped 42 points, including 18 in the third quarter. However, Khris Middleton also eclipsed 40, going off in the fourth quarter.

Khris Middleton up to 36 in the game and 20 in the 2nd half.. Fiserv Forum is HYPED!

The Suns' starters in Game 4:

Devin Booker – 42
Everyone else – 38 pic.twitter.com/XvRsn9bKOg

The Suns paid to have 200 plus employees travel to Milwaukee to cheer on the team. Because of that, the road rally took place inside Chase Field. 15,000 fans showed up.

Larry Fitzgerald is hoping for a championship ring. Enjoying his time before making a decision about his NFL career.

It’s now a battle of the home courts. The Suns have a shoe cam at home games, while the Bucks have a reverse food cam??

Game 5 is in Phoenix on Saturday July 17.