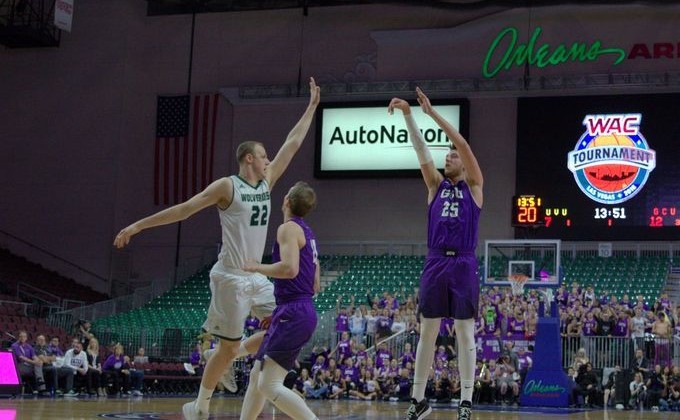 Alessandro Lever, who starred for Grand Canyon University’s basketball team over the last four years, will return to his home country of Italy to begin his professional career. The 6-10 center finished an incredible career with the Lopes with numerous accolades and some hardware to take back home to Italy with him.

Lever helped lead the Lopes to their first ever NCAA Tournament this past March that ended with a first round exit against Iowa. As a senior, Lever averaged 13.3 points and 5.4 rebounds to go along with a first-team All-WAC honor, 10 straight double-doubles, and a team-best 37.8% shooting from behind the arc.

While his college career is now behind him, Lever is set to reach a frontier that few Lopes have reached before – professional basketball.

“Signing a professional contract is just like the next step,” Lever said. “I’m just super excited to finally start this new adventure. It is like starting from the beginning in college for me, from zero because I’m basically a rookie.”

Lever joins a small group of Lope basketball players to reach the professional ranks that includes Horacio Llamas (the first Mexican-born player to play in an NBA game) and Bayard Forrest, who had stints with the Seattle SuperSonics along with the Phoenix Suns. Lever also joins DeWayne Russell as former GCU players to go overseas to play professionally.

Lever is set to play for the Allianz Pallacanestro Trieste of the Lega Basket Serie A, Italy’s highest level of professional basketball. The club has been in existence since 1975, winning five Italian League titles and one Serie A2 championship. Even with Lever returning back to Italy, he will always carry with him what he learned in his time at GCU.

“One thing that I really developed in America was the work ethic,” Lever said. “After being at GCU I still don’t understand when to take a day off and rest. But also making connections with my new teammates by hanging out with them because we are a team. Creating that chemistry allows us to not just play by ourselves but as a team. GCU taught me how to create chemistry for the floor in order to be successful.”

Lever hopes to take much of what he learned in college, including Dirk Nowitzki’s famous fade-away, to the professional level and beyond. Lever will report to training camp Aug. 9 and officially begin his professional basketball career.