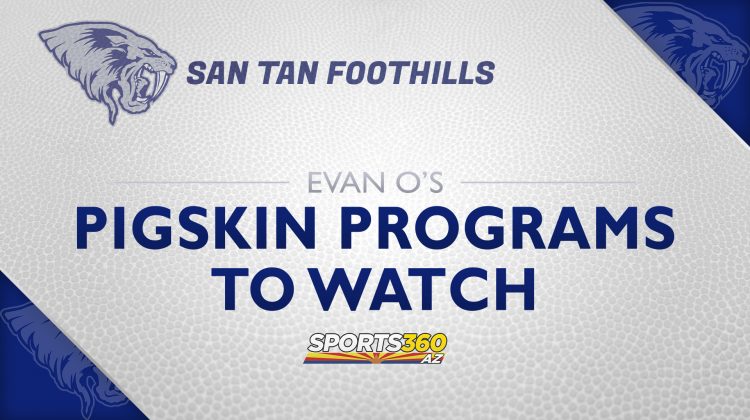 When Mike Carlin took the head coaching job at San Tan Foothills in Dec. 2020, he knew he was signing up for a massive challenge – bringing stability to a program that has changed coaches four times in four years.

Carlin, a longtime assistant coach who has made stops at Basha, Tempe, Marcos de Niza and most recently at Florence High School, has the experience necessary to lead the Sabercats back to respectability. The question is, will he have the patience?

“In the back of my mind, I’ve always wanted to be a head coach,” he said. “I got wind that this job was going to open up and at some point, you’re either going to go for your dreams or you’re just going to say ‘alright, I’m done.’ I always thought if I took over a program, I’d be taking over a program that I’d been part of, where a lot of things are in place, but that wasn’t the case [at San Tan]. I like the challenge.”

Sabercats are ready to put in some work at camp this week! See you at Foothills tomorrow morning by 7:30. pic.twitter.com/p24vNly8AO

His “dream job” might seem more like a nightmare for some coaches, but Carlin believes he has the recipe for reviving San Tan Foothills’ moribund football program. Due to the immense amount of turnover that has taken place in the last few years, he will essentially need to start from scratch, which is something he has done before at previous stops.

“It’s almost like starting a brand-new school, because there’s been so much turnover,” he said. “The closest thing I’d compare it to is Basha High School. When (former Basha head coach) Tim McBurney opened it, he opened it with freshmen the first year. I came on board the second year and we had just freshmen and sophomores. This is very similar to that.”

While San Tan Foothills does have upperclassmen on its current roster, the bulk of the team is young, and most of the seniors play on both sides of the ball to make up for a shortage of depth at certain positions. Addressing the lack of participation in football was Carlin’s first order of business after taking over, and he has placed a heavy emphasis on building relationships with local middle school football players and their families in order to bolster San Tan Foothills’ recruiting pipeline.

“Down here in Florence, they play eighth grade football,” Carlin said. “I went to all my feeder schools’ games, and so I got to see them play, I talked to their coaches, met their players, met the parents. I was just out and visible. In the spring, all of the coaches got to go out and recruit at the schools. We got to go there and spend an hour, half-hour with the kids and answer questions, get them signed up and just get them excited about [San Tan Foothills football].

In the future, Carlin hopes that members off his staff will become involved in coaching at San Tan Foothills’ feeder schools to further strengthen the relationship between the Sabercats’ football team and its subsidiaries. If that plan does not materialize, he says he will hold football camps at the feeder schools in order to keep future San Tan Foothills students interested in the sport.

Carlin’s efforts to recruit players from the middle schools that surround San Tan Foothills provide a strong sense of hope for the future of the program, but he will need to make do with his current group of players in the meantime, and he has started the process of reforming the team’s identity to better suit the strengths of this year’s squad.

In 2020, the Sabercats operated out of spread offense that they were ill-equipped to run, resulting in scoring troubles throughout the season. Carlin has instead opted to turn San Tan Foothills into a run-heavy team that prides itself on grit and physicality, which he says will cater to the strengths of his personnel.

“We have run kids,” he said. “We’re getting back to running the football and grinding it out. I coached spread at Florence and at Basha and I’d be happy to do that if we had the spread kids but we’ve got run-mentality kids here. We’re going to just fight our way through football games. We’re not going to out-big anybody or be faster than anybody but we’re going to fight you. We’re going to come out and we’re going to be fighters this year.”

💪That endzone battle is different.💪 pic.twitter.com/8F24RYYnqb

Toughness and intensity will be major points of emphasis for Carlin’s group this coming season, but he also wants to instill in his team the importance of analytics and strategic film study. Carlin, who has a background in mathematics, says that analytics will have a significant influence on how San Tan Foothills prepares for opponents this fall, and he hopes that the insight they provide will work to the team’s advantage.

“The plan is to up to football IQ of our entire program,” he said. “Hudl helps with that tremendously. It allows you to really gameplan for what you think [your opponent] is going to try to do to you that Friday night. Myself and the coaches, we’ll use Hudl a lot. We’re going to get the kids on the film and we’re going to teach them how to watch Hudl and how to filter it and what to look for. A lot of the time when they watch Hudl they just like to watch the game, they’re not watching for specifics. We’re going to teach them how to look for specifics which relate to their position.”

It will take time for Carlin to realize his vision for the program, but the early signs of encouraging. The current seniors, who have played under a different head coach every year of their high school careers, have fully bought into his blueprint, and Carlin expects their leadership to serve as an example for future generations of Sabercats to live up to. With a talented freshman class on the way and a renewed sense of excitement around the team, good things may await San Tan Foothills in the not-so-distant future.

“I think we just have great kids.” Carlin said.  They work hard, they get after it and they’re always encouraging each other. We have a really good freshman squad coming in, I watched them play their eighth grade football and I’m excited about them. I’m really excited about our future.”