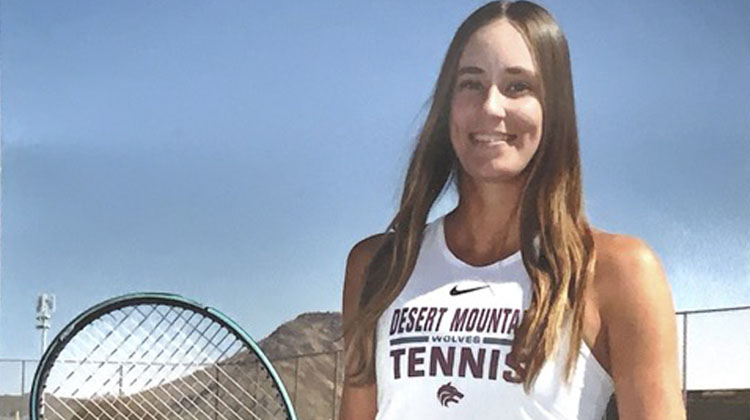 Playing tennis at Desert Mountain high school in Scottsdale comes with the expectation of winning. The program has won three of the last four Division I state championships in girl’s tennis, including this year, beating Hamilton 5–2.

A major reason for the team’s success is the performance of senior Savanna Kollock, who went 14-0 and finished 28-1 in sets during the regular season.

Savanna is the fourth-ranked junior player in Arizona, according to Tennis Recruiting Network. Nationally, she is No. 102 on the recruiting list for the class of 2022.

“She is probably the most amazing athlete in tennis, I have ever met,” Desert Mountain girls tennis head coach Kim Dever said. “She is going to go far in her tennis career.”

For Kollock, it was a relief to finally win a state title.

“It was a great feeling to see everything finally come together,” Kollock said. “When we finally won, I was thinking like, we finally did it. After some controversies, like over the past couple years. We as a team, we definitely deserve it.”

The team had been waiting two years to claim another championship. In 2019, the Wolves were disqualified by the AIA after a team reported them for making a lineup change during the playoffs. They were forced to forfeit their semifinal game against Hamilton.

After getting off to a hot start in 2020, the season was cancelled due to the COVID-19 pandemic. Many tennis courts closed for months as facilities began to shut down in March, leaving Kollock and her teammates looking for somewhere to practice in a sport that requires major dedication.

“I usually play like two or three times a day,” Kollock said. “It kind of depends on the schedule, but I’ll play from four to six hours a day.”

The Arizona native also plays in other events around the country. The United States Tennis Association will have tournaments in Georgia and South Carolina, which Kollock will participate in this summer. Coaches from various colleges will be in attendance, and Savanna will have an opportunity to showcase her talents before committing to a university.

“I’ve been able to visit a couple of colleges so far,” Kollock said. “I’m still trying to decide between local colleges and more out of state. If they watched me play, then I’ll get to talk to them more and just see which one I prefer.”

Tennis runs in the family as well, her father Tom, is a teaching pro at the Arizona Country Club and was Kollock’s first coach when she was starting out. Dever credits Savanna’s family for making her the person and player that she is today.

“She is mentally tough, physically in shape and probably one of the sweetest, nicest girls you’ve ever met off the court,” she said. “I really account this to her family. They support her, so does her grandparents. They’re almost at every match cheering her on.”

Outside of tennis, her passion for reading and writing has led to the creation of her own children’s book called ‘Cleo-cat-tra’s Wonderful World of Bugs’.

“I actually wrote a children’s book when I was 11 and I just got it published,” she said. “It’s for children
just learning to read. It’s a a sequel to a series that my grandmother wrote, so I was kind of inspired by that.”

With one season left at Desert Mountain, Kollock is expected to be a captain on the team as she tries to lead the program to another Division I state title.

“She will definitely be one of our captain spots next year and I think that’s so awesome for our younger girls coming in to be able to have her,” Dever said. “I think the girls would be lucky to have Savanna as their captain because she encompasses everything about tennis and athletes, what athletes should stand for.”