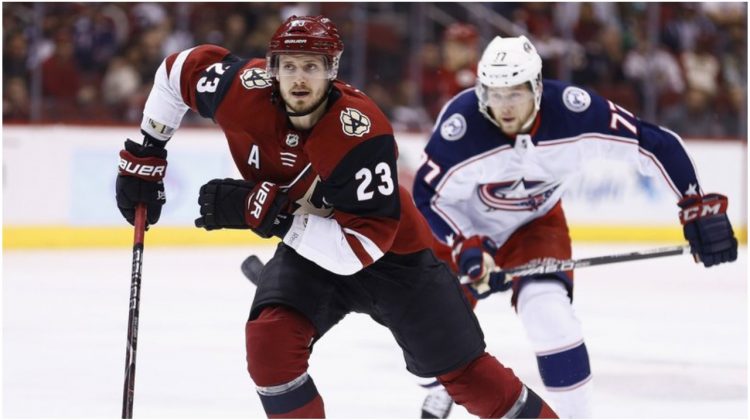 The Coyotes executed one of the biggest trades of the NHL offseason Friday afternoon, sending defenseman and team captain Oliver Ekman-Larsson to the Vancouver Canucks along with restricted free agent forward Conor Garland in exchange for three players and three draft picks.

The blockbuster trade, finalized less than three hours before the start of the 2021 NHL Entry Draft, brought an end to Ekman-Larsson’s 11-year run in a Coyotes uniform. The Swedish-born defenseman scored 128 goals and 388 points in his 11 years as a Coyote, and led all defensemen in goals during the 2014-15 season.

Ekman-Larsson was named captain before the start of the 2018-19 season, shortly after signing an eight-year contract extension worth $66 million. His contract quickly became a topic of discussion, as injuries contributed to a steep decline in his performance over the last three seasons, and his exorbitant salary likely contributed to his departure from Arizona. Ekman-Larsson had previously been linked to the Canucks in after waiving his no-trade clause last offseason, but no deal materialized.

Oliver Ekman-Larsson, meet the back of the net. pic.twitter.com/3rKkZ3gyfh

Garland, a restricted free agent who led the Coyotes in goals two seasons ago, was a fifth-round draft pick by Arizona in 2015. He made his NHL debut in the middle of the 2018-19 season and immediately became an impact player, endearing himself to fans thanks to his work ethic and timely scoring. The Scituate, MA native underperformed in 2021, scoring only 12 goals in 49 games, and was unable to come to terms with the organization on a contract extension, which likely factored into his exit from the desert.

In return for Ekman-Larsson and Garland, Vancouver will send the ninth overall pick in Friday’s draft to the Coyotes along with a second-rounder next year and a seventh-rounder in 2023. Arizona will also receive veteran forwards Antoine Roussel, Jay Beagle and Loui Eriksson in the deal.

The Ekman-Larsson trade appears to be the latest step in Coyotes General Manager Bill Armstrong’s master plan to take on unsavory contracts from other organizations in exchange for draft picks. By taking on the salaries of Andrew Ladd, Shayne Gostisbehere and the three forwards acquired from Vancouver, Armstrong has managed to add eight draft picks over the next three years, four of which are in the first two rounds.

In Roussel and Beagle, the Coyotes are getting two experienced bottom-six forwards with limited offensive ability but a healthy amount of physicality. Both have one year remaining on their respective contracts and should be regular players for Arizona in 2021. Eriksson, a 36 year-old former 30-goal scorer who is entering the final year of a six-year, $36 million dollar deal, only appeared in seven games for Vancouver last year, and it is unclear what role he will have with the Coyotes moving forward.

Antoine Roussel really turned on the turbo jets for this one. 💨#NHLonSN pic.twitter.com/3KtBe8j9cs

The departures of core players like Ekman-Larsson and Garland could signal the start of a wholesale rebuild for the Coyotes. Arizona’s $19.5 million in cap space makes it a possible destination for coveted free agents, but Armstrong has stated a desire to “get younger” multiple times during the offseason, and his emphasis on stockpiling draft picks seems to hint at a long-term approach.

Although Ekman-Larsson’s play dropped off in recent years, he leaves Arizona with a rock-solid legacy. In his prime, he was one of the league’s best offensive defensemen, and his exploits were the one of the few bright spots on a number of losing Coyotes teams. He was a regular at Phoenix-area Boys & Girls Clubs and finished as a finalist for the King Clancy Humanitarian award in 2019 for his philanthropic work in the Valley.  Coyotes fans will be sad to see Ekman-Larsson leave, but the trade gives both he and the organization a chance to start anew.

With the face of the franchise gone, a new era of Coyotes hockey has officially begun.