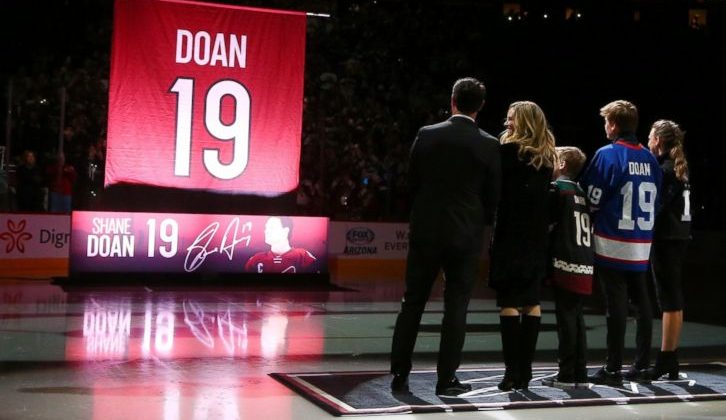 For as long as the Coyotes have been in Arizona, there has been a member of the Doan family associated with the team.

Saturday, the organization welcomed another member of the clan into the fold, drafting Arizona State’s Josh Doan with the 37th pick of the 2021 NHL Entry Draft.

Doan, a Scottsdale native who spent the last two seasons with the USHL’s Chicago Steel, becomes the highest draft pick in the history of ASU’s hockey program, and the first Arizona native to be drafted by the Coyotes. His father, Shane Doan, served as the Coyotes’ captain between 2003 and 2017, and has the most goals in franchise history.

“To tie it all together and come back to Arizona is definitely special,” Josh Doan said. “I think no matter where you’re from it’s going to be an honor to be selected by the team that’s from your city. Being around the rink my whole life as a kid, it just makes it that much sweeter.”

A physically gifted winger with excellent hockey instincts and a high level of skill, Doan projects to be at least a middle-of-the-lineup forward in the NHL, but will likely need at least a couple of years in college to work on some of the less refined aspects of his game, most notably his skating.

Many scouts and draft analysts anticipated that Doan would be selected somewhere in the third round, but the serious lack of in-person scouting over the past season made it difficult to accurately grade prospects. In such an unpredictable draft, any kind of familiarity or access to players was a huge luxury, and Doan’s being in the Coyotes’ backyard likely influenced their decision to draft him with their first pick of day two. Shane Doan says he was not involved in scouting or interviewing his son during the pre-draft process, and that he only learned of the team’s intention to draft Josh the prior day.

“They had kind of kept me out of the loop with Josh,” he said. “They wanted to make sure that there wasn’t any bias. I didn’t see it coming before [Friday].”

Along with first-round pick Dylan Guenther, Josh Doan should be a key component of the Coyotes’ attack for years to come. Expectations will be high due to his bloodline and his status as the first home-grown prospect in the history of the franchise, but Doan says he is prepared for the scrutiny, and he intends forge his own unique legacy independent from that of his father.

“I think no matter where you go at this point, there’s going to be pressure on you,” he said. “I’m excited to be a part of Arizona nonetheless.”