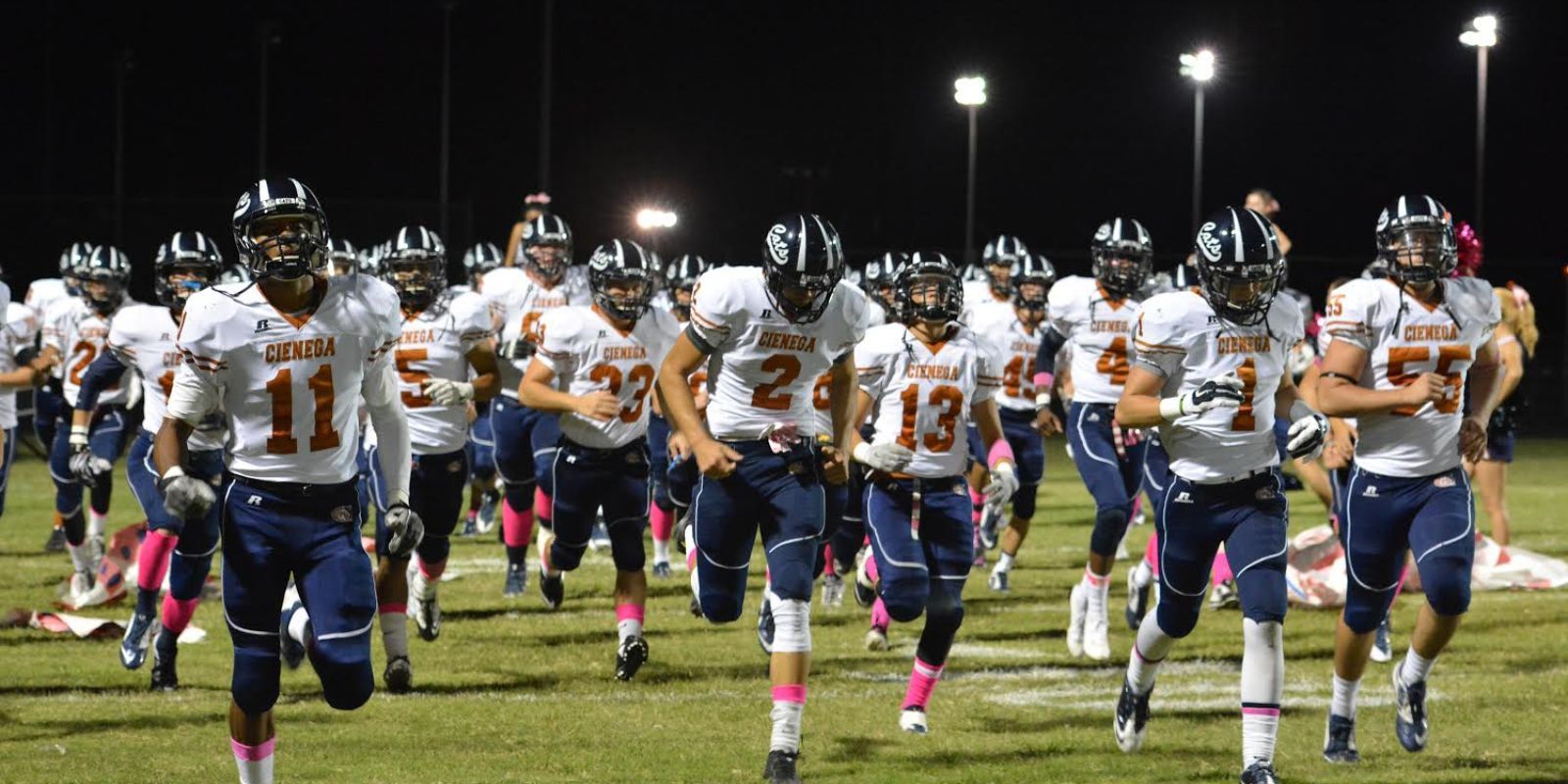 Cienega Players Take The Field Prior To A Game Against Marana

As the sports world has shifted more and more towards analytics in recent years, many collegiate and professional teams have invested in cutting-edge technology to evaluate and improve the performance of their players.

While this technology has not been widely used at the high school level due to its high cost, some schools, like Cienega High School in Vail, are taking full advantage of it to separate themselves from their competition.

The purchase was one of new Athletic Director Chris Desrosiers’ first orders of business upon arriving at the school. Strength coach Steve Schween had previously planned on experimenting with GPS tracking, but those plans were put on hold by the COVID-19 pandemic. Desrosiers had used Catapult technology during his time at the University of Arizona, and he began coordinating with Schween on bringing it to Cienega as soon as he was hired.

“I bought a single unit from a different company last year,” Schween said. “We only had two football games, so I barely even got to use it in the fall, but I knew it was something I wanted to get into. [Chris] set up a meeting with Catapult for us to upgrade our system. It was a year in the making, trying to get it in, but we instantly bought into it.”

The new set of GPS trackers employed by Cienega track a variety of metrics, including top speed, acceleration and distance covered, which are then compiled into a singular statistic that measures the overall strain on a given player during a practice or training session.

Big news to announce for our football program! We will now be partnering with @catapultsports to optimize on field performance through wearable technology and GPS tracking. @SteveSchween @CDesrosiers85 @CienegaSports pic.twitter.com/OsyQlzshzY

“It gives you a thousand different data points that you can look at,” Desrosiers said. “The accelerometer will tell you sudden changes in direction, sudden stops. It combines all of that into Catapult’s logarithm, which is called ‘player load.’ That’s kind of what you base your periodization off of, as far as planning practices, planning sessions.”

Aside from the obvious benefits of helping limit wear and tear on players, the new GPS system also promises to help Cienega’s top players with recruitment.

Many of the attributes that scouts tend to look for, like a player’s “motor” or “compete level,” can be difficult to attach statistics to. However, the Catapult units can be used to calculate numbers that reflect these intangible traits, which gives recruiters unique insight about prospective players.

“When you’re recruiting, there’s no exact science,” Desrosiers said. “But we’re giving them science to help support our opinions and support what they’re seeing on the game film. Being able to tell a guy that [a certain player] can accelerate a certain meters per second or he reaches a top speed of a certain miles per hour, that just speaks coaches’ language.”

Desrosiers, Schween and head coach Justin Argraves have devised a long-term plan for how they will use their new equipment. For this season, they plan to simply collect data and analyze trends, which they can then use to reform their conditioning program and re-organize football practices accordingly.

“For year one, we’re just going to observe how practices are run” Desrosiers said. “That’s really what you should do when you get this type of technology, just see what practice looks like first. You’ll be able to make adjustments going into year two or later in the season when you kind of see what the baseline data looks like.”

In addition to helping them figure out their athletes’ baselines, taking a patient approach will help the staff ease into their new situations. Desrosiers and Argraves are new to Cienega and will need time to familiarize themselves with the players, while Schween will have to acclimate himself to the new technology.

“I’ve got resources to use but it’s going to be a learning curve,” Schween said. “We do track velocity within our weight room, we do have velocity-based technology, so I’m used to collecting certain data and looking at different points and metrics, but not so much out there in the wearable technology.”

Schween will have plenty of time to master the new system, and if all goes according to plan over the next couple of years, Cienega could extend their use of player tracking to other sports as well if it makes sense financially. Other schools are likely to follow Cienega’s lead and experiment with Catapult technology in the future, but Cienega’s athletic staff will do everything they can to stay a step ahead of the rest.