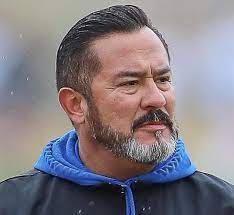 Brophy Prep has announced the hiring of George Archuleta as its new soccer coach following the unexpected resignation of Paul Allen, who led the Broncos to three straight 6A state titles while finishing last season No. 2 in the nation.

Archuleta, a former US Navy corpsman who worked as a trauma medic, has previously coached Sandra Day O’Connor High School and numerous club soccer teams in the Valley. Even though Archuleta enjoyed his stay at O’Connor, he says there was something drawing him to become a Bronco.

“I don’t make any moves in my life without praying and looking for God’s direction,” Archuleta explained. “A group of kids that I youth lead at my church told me that Paul Allen resigned and they really wanted a strong leader in there. They told me I would be a great fit.”

Today, Principal Bob Ryan announced the hiring of George Archuleta to lead Brophy's championship soccer program. Coach Archuleta brings a wealth of experience to the program — we are excited to have him join our Bronco community!
Press release:https://t.co/bIcNbipeYK pic.twitter.com/i3zR5hXpRY

Even with the persuasive words from the youth group, Archuleta still wasn’t sure it was the direction he was supposed to go in.

“I’ve worn the eagle (Sandra Day O’Connor’s mascot) on my chest for 10 years and you’re asking me to switch to a bronco, that’s a big change,” Archuleta explained.

Archuleta didn’t just stumble upon the opportunity but received the likings from Brophy legend Matt Newman whose words excited Brophy athletic director and head baseball coach Josh Garcia. If that wasn’t enough for Archuleta to become a Bronco, a sign came at an unexpected time.

“I get out of the grocery store on the northwest side and this guy gets out of his car next to me,” Archuleta explained. “He has a Brophy mask on because of COVID so I’m like “what are you trying to tell me? Is this where I need to be?” and it just becomes more and more obvious.”

Archuleta has been working with high schoolers for more than 15 years of his life where he takes pride in developing the youth to not only be successful on the field but also off the field through developing their character.

On the field, Archuleta has made a profession by getting the most out of athletes while working for EliteLevel PT where they specialize in PASS program (performance, agility, speed, and strength).

“Paul has been very successful there (Brophy) and I am sure they have had a lot of very successful coaches,” Archuleta explained. “But there could be little things missing and little things that we can do better by being tactical students of the game. When it comes into the expertise that will come into play of taking them to another level, I feel that I can definitely do that.”

“But I’m not going to come in and reinvent the wheel either, soccer is soccer and there is only so many formations that you can run or so many ways of attacking. But the biggest part of what it’s going to be that what I do with my team is that everyone walks out of there like a family. I come at it with a father approach by not only being their coach but also their mentor and a leader.” Archuleta explained.

Archuleta certainly doesn’t shy away from that fact that he wants his teams to win and has created a winning culture on many of his teams. His resume includes appearances in the State Cup for club, the Dallas Cup, and a team making it to the semi-finals in international tournaments. In 2000, Archuleta led his team to an underdog win against Del Sol, who rostered six division one and national players.

Archuleta has been a native to the Valley as his roots run through Apollo High School where he played soccer there which included an offer to play at GCU but foregoing that to enter into the military. Archuleta got back into soccer and the coaching ranks when his children started playing at the local YMCA and his love for the game came back to him.

Archuleta and the Broncos will look to follow up last season with another 6A state championship this coming
winter.