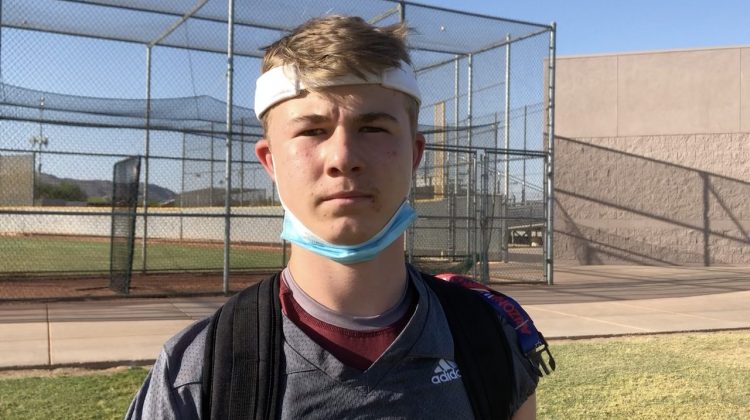 Every now and then, we hear of an incoming sophomore who has yet to log varsity experience, but their freshman seasons are well known.

Jawhar Jordan at Hamilton was a well-established name based on what he did on Wednesday nights.

“I’ve been mostly working on my legs, and just making sure I can get the plays,” McDonough said. “I’m new to the offense this year, we can change it up a little bit. So I’ve just been trying to stay in (the coaching staff’s) back pocket. And just make sure I know everything. So when I’m back, I can begin with that new playbook.”

“They’re changing a lot of things,” McDonough said. “I think that they’re kind of just rebooting. And it’s cool that Arizona is my home school. So I thought it’d be cool to go to. It just tells me like that all my hard work paid off and I just have to keep working so I can keep developing.”

McDonough styles his game after a former Desert Mountain gunslinger in Kedon Slovis. He has trained with the USC quarterback and the two are friends.

“We’re both kind of dropped back passers,” McDonough said. “We know how to scramble but we don’t have to do it. And we’re both good at delivering it on time and accurate.”

He’s also picked Slovis’ brain about being a decorated quarterback and navigating a recruitment.

“He told me to trust the process,” McDonough said. “Do what you think you can make sure you can play. Just give your best. He he wasn’t looked at very much but USC kind of found him when he was a senior and that’s turned out great for him. So just trust the process.”

Not only is McDonough a stat-filling quarterback, but he’s also one of the best golfers in the state.

He balances football and golf in the fall and uses lessons on the course and under center to help enhance both sports.

“I think being golfer there’s lots of pressure situations same as being a quarterback,” McDonough said. “You’re down by three, with like a minute left, and you have to drive down the field to get kick a field goal, or maybe score a touchdown to win. It’s similar to if you’re down by like two strokes going into the last hole. You know that you have to hit a good shot and make a putt to make birdie.”

Whether it’s on the gridiron or with his set of irons, McDonough is looking to make an impact for the Wolves in the coming years.