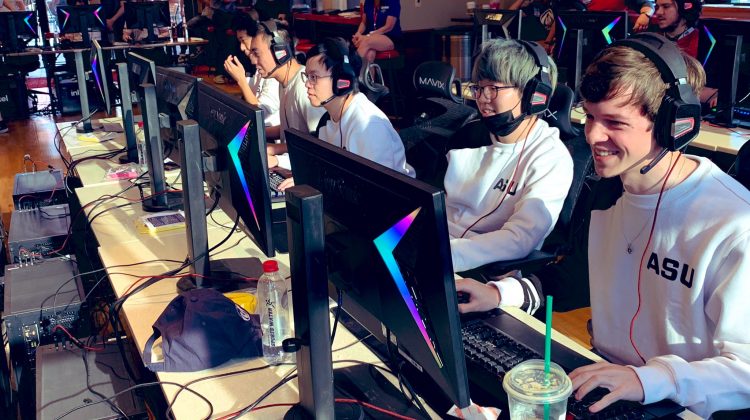 Arizona State’s Esports Association is one of the university’s biggest and most diverse communities, with 2000+ members from all campuses, and is 100% student run.

The club opened its doors un 2011 as a way for students who enjoyed Starcraft II to play together. In 2016, ASU won “Heroes of the Dorm”, which at the time was one of the biggest collegiate esports tournaments, which put ASU’s esports teams on the radar and led to a boom in popularity.

Since then, ASU has won multiple titles and placed highly in multiple esports, even going so far as to win the SMITE collegiate national championships this past season. They hope to receive funding for their League of Legends, Overwatch, Rocket League, and SMITE teams by fall 2022.

Funding would include athletic scholarships, travel expenses and equipment. Ideally, the club would love to have ASU support all of their titles, but ASU Esports Vice President Jesse Brawders says that’s a few years away.

“It’s more acceptable now to have an esports program. You have GCU, University of Arizona just announced at the end of the spring semester that they became funded,” Brawders said. “The sky’s the limit, we’re just gonna keep trying to win titles.”

Typically, the club will try to host LAN events bi-weekly, and those will bring in about 100-150 people. However, they expect those numbers to increase this year. During the COVID-19 pandemic, the club saw its biggest growth and uptick in activity. Students are hungry to get back in person and see the friends they played with during the pandemic.

“It’s hard to visualize the community until you actually see them in person,” Brawders said. “We’ve got people from all the campuses, so I think it’s one of the most diverse clubs at ASU.”

This past year, the club even put on a Barstool-sponsored event from Sun Devil Stadium where ASU’s Call of Duty: Warzone team placed third overall in the country. Due to COVID-19 protocols, only about 10 people were allowed into the event, but more than 100 concurrent viewers tuned in online. Barstool’s stream maintained more than 10,000 viewers throughout the event.

The big screen is all set up for a nail biter as we go into the last drop of the night pic.twitter.com/XbyYx6pDIe

Another event that ASU Esports has helped put on is Cactus Combine, a tournament involving Arizona’s four major universities. ASU Esports also gives back every year by working with Extra Life, a charity that raises money for children’s hospitals through streaming and gaming.
In years past, ASU Esports will do a 24 hour livestream on Twitch to help raise money for the Phoenix Children’s Hospital. Last year they were able to raise $3000 during the livestream, using stretch goals to incentivise donations. This year, they’ll be doing a month-long event with Extra Life from November 21 to December 21.

Our @ExtraLife4Kids campaign officially comes to an end!

Our community continues to amaze us everytime and this is no exception!

We not only hit our goal, but almost tripled the amount! So thankful for our staff, streamers, and most importantly, our community for donating ❤️ pic.twitter.com/RhGRO1uDZ2

“Our stretch goal this year is probably gonna be $5000. But I think we’ll smash that since it’ll be a month-long thing,” said Claire Kenison, President of ASU Esports. “We might reach out to U of A too to do a competition, plus the Phoenix Children’s Hospital will promote it all over their social media. It’s gonna be huge.”

Kenison says that ASU Esports hopes to be able to host official intramural esports in the near future
through the university, which can translate into increased funding for their esports teams by next fall.

“I’d love it if we became a community that hosts intramural esports. We kind of
want to be like ASU’s 942 Crew. Host events, cheer teams on, and show support,” said
Kenison.