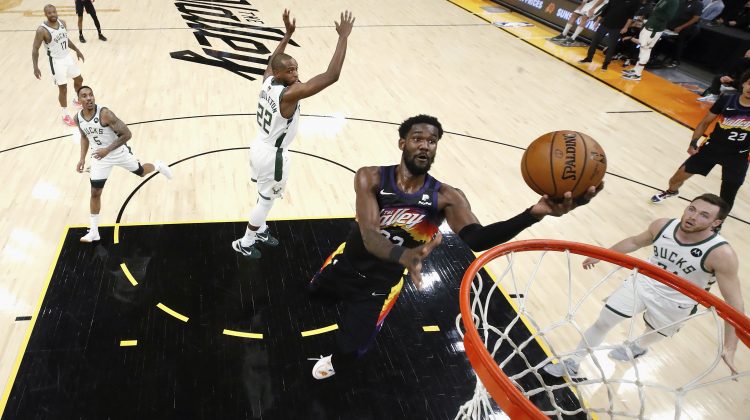 While many across the nation might view the Suns’ third-year center, Deandre Ayton, as a third fiddle of the scorching hot Phoenix roster, the Bahama native has placed a monument impact on the 2021 NBA Playoffs.

Even before Ayton officially became the No. 1 overall draft pick in 2018, it was predetermined by the masses that his name would forever be tied to fellow 2018 draft picks, Luka Dončić of the Dallas Mavericks and Trae Young of the Atlanta Hawks. Even those in the valley would quickly declare Ayton a draft bust through his first two seasons, only averaging 17 points per game on 56% shooting, while Dončić and Young were boasting near-herculean performances every other night.

While Young and Dončić averaged more than 25 points, nearly nine assists, and a strong chunk of rebounds per game, Ayton seemed to struggle to find his place in the professional game. The youngster was sometimes visibly tired in the fourth quarter, lacked finesse and aggression in the post, and was manhandled by the veteran centers of the league across the floor.

Deandre Ayton has a 50% FG pct in each of his first 15 career playoff games, the longest streak to start a playoff career in the shot-clock era (since 1955)

It’s the 2nd-longest streak in a single postseason all-time, trailing Shaq in the 2006 playoffs (18)

This postseason, Ayton has gone toe-to-toe with some of the most aggressive and talented big men in the league over the past decade such as Anthony Davis, Marc Gasol, Andre Drummond, Demarcus Cousins, and the last two NBA MVPs, Giannis Antetokounmpo and Nikola Jokic. Even if not all the names listed are elite talent, not only could Ayton keep up with every player he faced but he oftentimes outperformed them game-by-game.

“To see his growth, man, I get goosebumps seriously,” Suns guard Chris Paul said after Game 4 against the Clippers. “We had some heated conversations this season, especially earlier in the season but I genuinely love him. The person that he is and to see everything that’s coming to him, national audience getting to see who he is and why he’s the No. 1 pick, I couldn’t be happier for him.”

Throughout the year, Ayton has made it clear that future Hall of Famer, Chris Paul, has made an insurmountable improvement to the center’s game this season. It is impossible to dismiss Ayton’s growth from game one of the 2020-2021 season up to the playoffs.

While Ayton plays with a new demeanor and talent level, those who only look at the stat sheet won’t understand this season’s road to success. Statistically, 2020-2021 has marked the center’s lowest career scoring average and he failed to improve his rebound, block, and assist averages from last year.

Regardless of what the stats say, Ayton has added a new set of post moves to his game, keeps the ball high and protected in the post, and has developed the ability to receive nearly any lobbed pass. No. 22 looks like an entirely new player compared to just one year ago both physically and mentally.

“I love CP, man. Like I said, that’s really the only teammate that really push me. Like big bro-type push. Knowing what I got and that I ain’t never thought that I had,” Ayton said after Game 4 against the Clippers. “I think he was the best thing that happened to my career. I can say that every day.”

The 6’-11’’ starter was a literal bully during his time at Hillcrest Prep in Phoenix as a seven-foot, 235-pound monster. Ayton received offers from San Diego State, Maryland, Kentucky, Kansas, and his eventual one-year home, UArizona.

In his lone year at the University of Arizona, Ayton maintained the ability to be a walking double-double. Ayton played in 35 games his freshman season and averaged 20 points alongside 12 rebounds and 2 blocks per game.

A 27-8 season gave the Wildcats the fourth seed in the NCAA Tournament South bracket but was annihilated by the 13-seed, Buffalo. Ayton only scored 14 points but pulled down 13 rebounds in the massive upset loss.

While the addition of Paul has made a colossal difference for Ayton, another major piece of his development has been his growth alongside fellow Phoenix star, Devin Booker. The duo’s chemistry has reached new heights as their talent levels rise as well.

Another part of Paul’s game he brought to this Suns team is his experience as a leader and as a winner. While Paul still needed to get over the hump to become a champion, the 36-year-old was able to bring a new sense of communication and confidence to this young Phoenix roster.

“Earlier in the year, there was some gray areas as to how to help those guys play together. I think those three deserve a lot of credit for the time that they spent after practice talking about certain environments,” Head coach, Monty Williams, said. “I would love to tell you that I orchestrated it all, but we have given them a system and then those guys talk about the angles of the screens and different ways to run plays that we have so that they can be effective. I just think it’s a lot of intentional conversations between those three and all of our guys.”

Ayton has become an offensive rebounding machine for Phoenix, a category that the Suns fell short on, in early rounds. On five different occasions this postseason, Ayton has collected four or more offensive rebounds. Even when he is not the guy collecting off the glass, he has improved in tipping the ball to his fellow teammate as well.

“They got to tell me something every day to click,” Ayton said. “Book always has something to say in a good way, just to get me going. I can just say they keep a consistent thing where they are always giving constructive criticism, and I take the best of it.”

Most games with 20+ points on 80% shooting in a single playoff run:

The only player with former Finals experience is a newcomer from the Miami Heat last offseason, Jae Crowder. The nine-year NBA veteran has brought the extra intensity and grit on the floor while Ayton, Booker, and Paul tally up the stat sheet. Through this playoff run, Crowder credits the willingness of those three stars to adapt en route to success.

“They have done a great job of just being who they are, but at the same time, trying to mold themselves into whatever that series or that team is forcing us to be as a team, as individuals,” Suns forward, Crowder, said. “I think it’s not a surprise to me that they’ve come out and performed the way they’ve performed the first few rounds.”

In a world of stretch-fives and three-point shooting centers, the 250-pounder is proving that it is still possible for centers to thrive in the paint. While Ayton doesn’t admire the term “big-man” and has a versatile set of shooting skills, his domination inside the arc has been a substantial part of the Suns’ success. Even when the Clippers attempted to shut down his efficiency in the post with double teams, sneaky rotations, and great coverage, Ayton still managed to leave his footprint on the series averaging 18 points with 14 rebounds.

“[Ayton has] just locked into the role,” Williams said. “Sometimes when you tell a player he has a role, they tend to think that you’re limiting their ability. I don’t think DA thinks that. I think he understands his role and how he can affect winning on both sides of the ball. It certainly helps to have Chris and Book creating opportunities for him, but he’s done a really good job of understanding the angles and screens and where to be in the pocket to finish around the basket. He’s just a presence down there.”

Only Ayton and Atlanta Hawks center, Clint Capela, have not shot a three-pointer in the postseason, with a minimum of 60 shot attempts. From an advanced analytics perspective, Ayton has the highest amount of win shares of any player in the postseason. Add that alongside being tied for the most rebounds in the playoffs, the Bahamian very well could be looked back on as the most important player on the floor throughout the Suns’ first postseason appearance in 11 seasons.

“I think Deandre Ayton, the way he’s worked all season long, he took it to a whole ‘nother level during the playoffs,” Paul said.

Regardless of the NBA Finals outcome, expectations for the third-year youngster continue to rise as Ayton’s stats continue to draw comparisons to all-time greats. No longer can the naysayers heckle the center or deem him a bust. Ayton has become a face of the Suns franchise and is on his way to becoming a staple of their history.

Tonight was Deandre Ayton's 6th career 15-rebound double-double in the playoffs, T-4th most by a player in his first postseason in NBA History.

The Suns look to take a 2-0 lead over the Milwaukee Bucks Thursday night in Game 2 of the NBA Finals. Coverage begins at 6:00 p.m. Arizona time on ABC.

"Our team is built a little different." – CP3