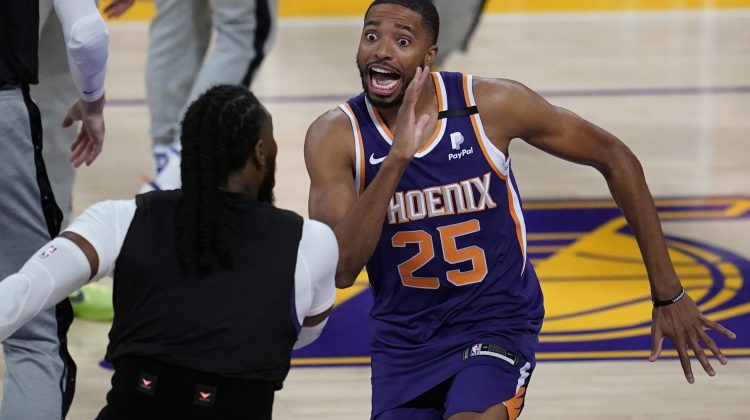 Round 2 of the NBA Playoffs is here. The No. 2 seed Suns are preparing for the No. 3 seed Denver Nuggets. The seaon series was 2-1 in favor of the Nuggets. However, the margin of victory was just five points. The Nuggets won in overtime and double overtime on back-to-back days in January.

The main difference makers are obvious for the Suns: Chris Paul and Devin Booker. The Nuggets have Nikola Jokic, arguably this season’s MVP. They won’t have Jamal Murray due to injury.

“They played through Jokic a lot,” Suns coach Monty Williams said as he refelcts on their initial matchups. “They don’t have [Jamal] Murray now, but [Michael] Porter Jr. has stepped up with his production on offense.”

One matchup to keep an eye on is at the wing with Mikal Bridges and Michael Porter Jr. Both were drafted in 2018, with picks 10 and 14 respectively. Porter Jr entered college as a top three recruit, but a back injury led to his fall in the first round. After missing all of 2018-19, he’s become a vital player for the Nuggets. Porter Jr. is showing impressive fortitude, averaging 18.8 points on 53.8 percent shooting in the six-game series win over the Portland Trailblazers.

Bridges, averaging 11.8 points in round one, is ready to take the task of slowing down Porter Jr.

“He’s unbelievable,” Bridges said about Porter Jr. “Pre-draft, teams didn’t trust him after his back injury, but we [fellow draftees] knew exactly who he was going to be.”

The challenge of defending the deepest position in the league is a driving force in Bridges mindset. He’s guarded the likes of Luka Dončić and Kawhi Leonard this season, posting a 111.7 defensive rating in 2021. While Porter Jr. has three inches on Bridges,  the Suns wing has a longer wingspan ans is quick. He’ll need all of that to defend MPJ’s ability to score at all three levels.

“He can shoot overtop of anybody and he can get hot really quick,” Bridges said. “I just have to lock in and play hard.”

The young Nuggets star is becoming a lethal offensive weapon, but his defensive prowess is yet to develop. The Suns understand this and Bridges says he’s looking to score a little more in this series. The Suns, averaging 104 points against the Lakers in the first round, will need to see Bridges and others score more. The Nuggets scored 120 points per game against the Trailblazers, and they’re one of the top scoring teams in the league.

“We know what they bring to the table,” Williams said. “We are preparing as much as we can to beat this team, taking it one game at a time.”

Tickets for Games 1 & 2 of Round 2 are on sale NOW! Get yours before they’re gone and help secure our home court advantage!

Game 1 is Monday night at 7 p.m. at Phoenix Suns arena. 16,000 fans are allowed to attend. Expect Bridges and Michael Porter Jr. to put on a show as they go at eachother.