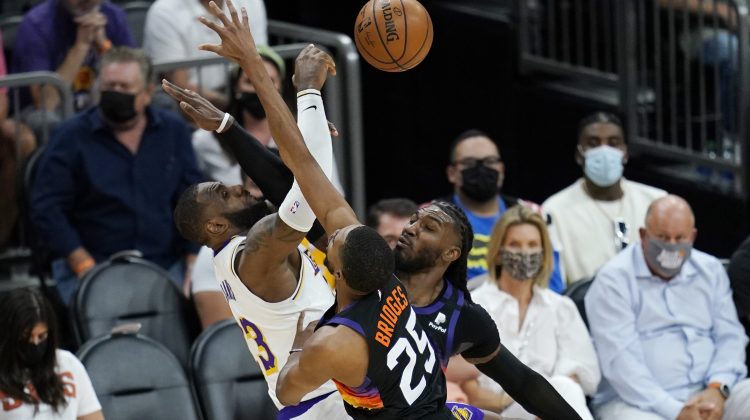 While many thought the Phoenix Suns (51-21) could win a pivotal Game 5 against the Los Angeles Lakers (42-30) on Tuesday, a 30-point blowout didn’t appear likely. Now riding at what might be the highest point of their season, the Suns have a chance to eliminate the defending champion Lakers in Game 6 of the First Round of the NBA Playoffs on Thursday, June 3, 2021 at 7:30 p.m. MST on Bally Sports Arizona.

The Lakers are favored back home in Staples Center following a 30-point blowout to the Suns on Tuesday night. The spread started at -3 for BetMGM, but since have lowered to a mere 2-point spread. In the past two seasons, L.A. has only suffered losses of 20 points or more on 4 occasions, with LeBron James only playing in two of those events. Los Angeles is just 2-2 in their games following a loss of 20 points or more but averaged 102 points in those bounce-back games.

For the first time in this series, Devin Booker played like the All-Star that fans have come to know in Game 5. And who would have thought that Deandre Ayton would be the most consistent player on the floor in this series, averaging 17 points and 12 rebounds per game? Even with Chris Paul playing well below 100% in this series due to his shoulder injury, the youthful Suns have shown resilience and maturity (outside of the fourth quarter of their Game 4 loss).

Betters are facing the tightest spread of the series since Game 2 featured a 2 point spread. The Suns have a record of 27-19-1 against the spread when they are an underdog of three points or less. Los Angeles is just 21-26 this season when favored by at least three points.

The @Suns dominated the @Lakers in Game 5 and take a 3-2 series lead with some bragging rights. Here’s how this epic game unfolded on the internet🏀☀️https://t.co/VHRwCJwcDl @Sports360AZ

Following the highest-scoring game of the series by the Suns, betters have been offered the lowest over/under of this first-round series. This matchup only scored the over bet once this series, coming from the Lakers 109-102 Game 2 road victory. In the series, the total points per game has only averaged 199 points.

While the Suns have hit the OVER in 55.8% of their games this season, the Lakers have only surpassed the over in 38.5% of their matches. Even with the uncertainty of Anthony Davis and Chris Paul, expectations are lofty for both teams.

Suns fans know Devin Booker can be a superstar but hasn’t played like it thus far in the series outside of his Game 5 performance, scoring 30 points alongside seven rebounds and five assists. Ayton has been impressive to say the least, commanding the paint in the series against great big men, Anthony Davis, Marc Gasol, and Andre Drummond. While this youthful duo has zero playoff experience prior to a couple of weeks ago, the expectation for these youngsters is to finally put a game together in this series where they both put up All-Star-like numbers to ice the series in L.A.

If you think Dennis Schroder will go a second straight game without a field goal, you’ll likely be mistaken. Prior to Game 5, Schroder was one of the top contributors for the Lakers, pestering the Suns offense while simultaneously averaging 16.5 points per game. Meanwhile, even though one of the greatest players in NBA history has been averaging 22 points per game in this series, there has yet to be a LeBron James takeover in a game. The expectation for James, in only his second career first-round elimination game, is to put up a legendary game in Staples Center. Without one, the defending NBA champions might be sent home in six games by a team who hadn’t been in the playoffs in 11 years.

Listen to that sweet sweet sound…

You would think this would be a simple bet to decide for a player who averaged 29 points per game in the playoffs entering 2021, playing in an elimination game. LeBron hasn’t looked like “Playoff LeBron” though in the first five games of the series, though. James has averaged 22 points, eight assists, and seven rebounds in the series so far.

James has played in 24 playoff elimination games in his career and averaged 33.7 points, 10.8 rebounds, and 7.6 assists. His most recent elimination game came in Game 4 of the 2018 NBA Finals where he was swept by the Golden State Warriors. James scored 23 points in 41 minutes, lowering his all-time elimination game record to 14-10.

Of his 24 elimination playoff games, James has scored under 27.5 points just seven times. In 36 career games vs the Suns, James averages 27.0 points.

Game 6 of the Western Conference quarterfinals between the #2 Suns and #7 Lakers continues Thursday at Staples Center in Los Angeles. Coverage on Bally Sports Arizona begins at 7:00 p.m. Mountain Standard Time with Suns Live! Pre Game with tipoff at 6:30 p.m. Be sure to check out Brad Cesmat’s Football AZ before Suns Live! Pre Game and Suns Live! Post Game as well.

More on the Suns beat down of the Lakers in game five tonight: https://t.co/BFVOzq2xja